Active Vs. Passive & The Simple Reasons You Can’t Beat An Index

Just recently, I was reading an article from Larry Swedroe which “discussed” the “Surprising Results From S&P’s Latest SPIVA Analysis.” To wit:

As Larry concludes from that analysis:

See, according to Larry, it is clear you should just passively index in funds and everything will be just fine.

The following chart of Fidelity Contra Fund versus the Vanguard S&P 500 Index proves this point. Which fund would you have rather owned?

Finding funds with very long-term track records is difficult because the majority of mutual funds didn’t launch until the late “go-go 90’s” and early 2000’s. However, I did a quick look up and added 4-more active mutual funds with long-term track records for comparison. The chart below compares Fidelity Contrafund, Pioneer Fund, Sequoia Fund, Dodge & Cox Stock Fund, and Growth Fund of America to the Vanguard S&P 500 Index.

Do you want to know what fund did NOT beat the index according to Morningstar? The Vanguard S&P 500 Index fund. How is it that a fund that is supposed to purely replicate an index, failed to exactly match the performance of the index.

Unfortunately, in the “real world” where people actually invest their “hard earned savings,” their overall returns are constantly under siege from taxes, previously commissions, fees, and most importantly – taxes.

The chart below is the S&P 500 Total Return Index before, and after the same expense ratio charged by the Vanguard S&P 500 Index Fund. Since most advisers don’t manage client money for free, I have also included an “adviser fee” of 0.5% annually. Of course, if your adviser is simply indexing for you, then maybe the real question is exactly what are you paying for?

The Differences Between You And An Index

Which brings us to why you, nor any investment product that exactly mimics the S&P 500 index, can actually match it, must less beat it.

While Wall Street wants you to compare your portfolio to the ‘index’ so that you will continue to keep chasing an index, which keeps money in motion and creates fees for Wall Street, the reality is that you and an index are very different things. This is due to the following reasons:

1) The index contains no cash,

If you maintain cash for expected expenses, taxes, or any other reason, your performance will lag the benchmark index.

2) The index has no life expectancy requirements – but you do.

While it may sound great that if you just hold an index long-term you will generate 8-10% annual returns, the reality is that your investment horizon between accumulation and distribution fall within one “full-market” cycle. Start on the wrong end of a cycle (high starting valuations) and the end result will be far less than advertised. 3) The Index does not have to compensate for distributions to meet living requirements.

At the point in life when you begin withdrawing money to live on, performance is affected by the withdrawals against the value of the portfolio.  (Read more here)

4) The index requires you to take on excess risk.

Risk is rarely understood by investors until it is generally too late.

Chasing the S&P 500 index requires you to have your portfolio fully allocated to equity risk, at all times. This vastly increases the “risk profile” of the portfolio which may not be optimal for investors approaching, or in, retirement. (Read more here) 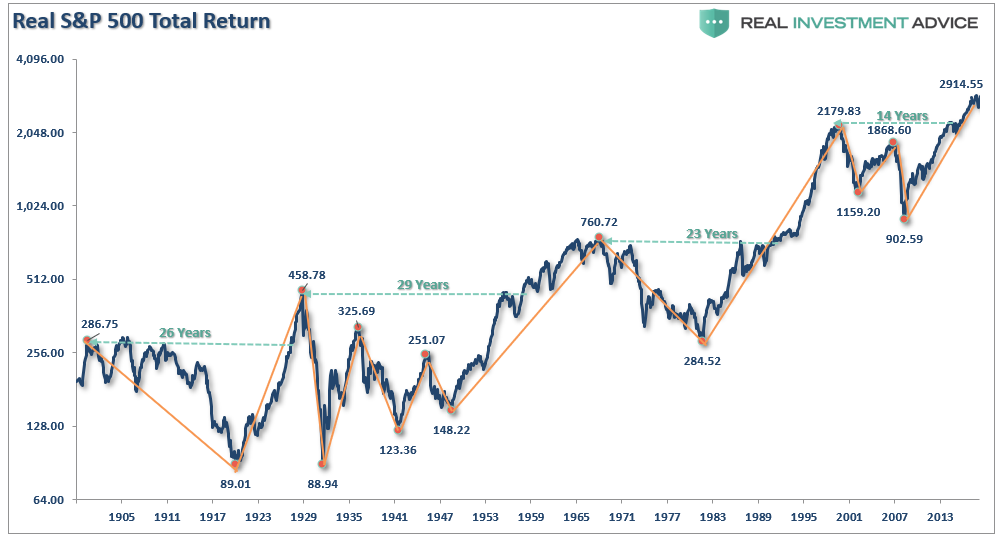 5) It has no taxes, costs or other expenses associated with it.

As noted above, an index does not have to pay taxes on realized gains and dividends, does not have management fees, or other expenses which must be covered. All of these items will lead to underperformance from one year, to the next, versus an index.

6) It has the ability to substitute at no penalty.

In an index, if a company goes bankrupt, the index simply takes it out and substitutes another stock in its position. The index value is then adjusted for the “market capitalization” of the new entrant and the index resumes. However, in your portfolio, given you only have a “finite” amount of capital, when a company goes bankrupt, or losses the majority of its value, you have to sell that stock at a loss and buy the replacement with whatever is left or add more capital.

Despite the media’s commentary that “if an investor had ‘bought’ the bottom of the market,” the reality is that few, if any, actually ever do. The biggest drag on investor performance over time is allowing “emotions” to dictate investment decisions. This is shown in the Dalbar Investor Study which showed “psychological factors” accounted for between 45-55% of underperformance. From the study:

The Only Question That Matters

There are many reasons why you shouldn’t chase an index over time, and why you see statistics such as “80% of all fund underperform the S&P 500.” The impact of share buybacks, substitutions, lack of taxes and trading expenses all contribute to the outperformance of the index over those actually investing real dollars who do not receive the same advantages.

More importantly, any portfolio that is allocated differently than the benchmark to provide for lower volatility, create income, or provide for long-term financial planning and capital preservation will underperform the index as well. Therefore, comparing your portfolio to the S&P 500 is inherently “apples to oranges” and will always lead to disappointing outcomes.

It’s fine to compare things to a benchmark. In fact, it’s helpful in a lot of cases. But we need to careful about how we go about doing it.” – Cullen Roche

For all of these reasons, and more, the act of comparing your portfolio to that of a “benchmark index” will ultimately lead you to taking on too much risk and into making emotionally based investment decisions.

But here is the only question that really matters in the active/passive debate:

“What’s more important – matching an index during a bull cycle, or protecting capital during a bear cycle?”

You can’t have both.

If you benchmark an index during the bull cycle, you will lose equally during the bear cycle. However, while an active manager that focuses on “risk” may underperform during a bull market, the preservation of capital during a bear cycle will salvage your investment goals.