With 2021 already off to a good start, with the market up almost 2% in January, such is an excellent time to review our “investor resolutions.”

There is an abundance of “Wall Street Axioms” surrounding the first month of the New Year as investors anxiously try and predict what is in store for the next twelve months. You are likely familiar with the “Superbowl Indicator” to “So Goes The First 5-days. So Goes The Month.”

Considering that trying to predict the markets more than just a few days in advance is mostly an exercise in “folly,” it is nonetheless a traditional ritual as the old year passes into the new. While Wall Street espouses their always overly optimistic projections of year-end returns, reality has often tended to be somewhat different.

However, from an investment management perspective, we can look at some of the statistical evidence for January to gain insight into performance tendencies looking ahead. From this analysis, we can potentially gain some respect for the risks that might lay ahead.

According to StockTrader’s Almanac, the direction of January’s trading (gain/loss for the month) has predicted the course of the rest of the year 75% of the time. Starting from a broad historical perspective, the chart below shows the January performance going back to 1900. 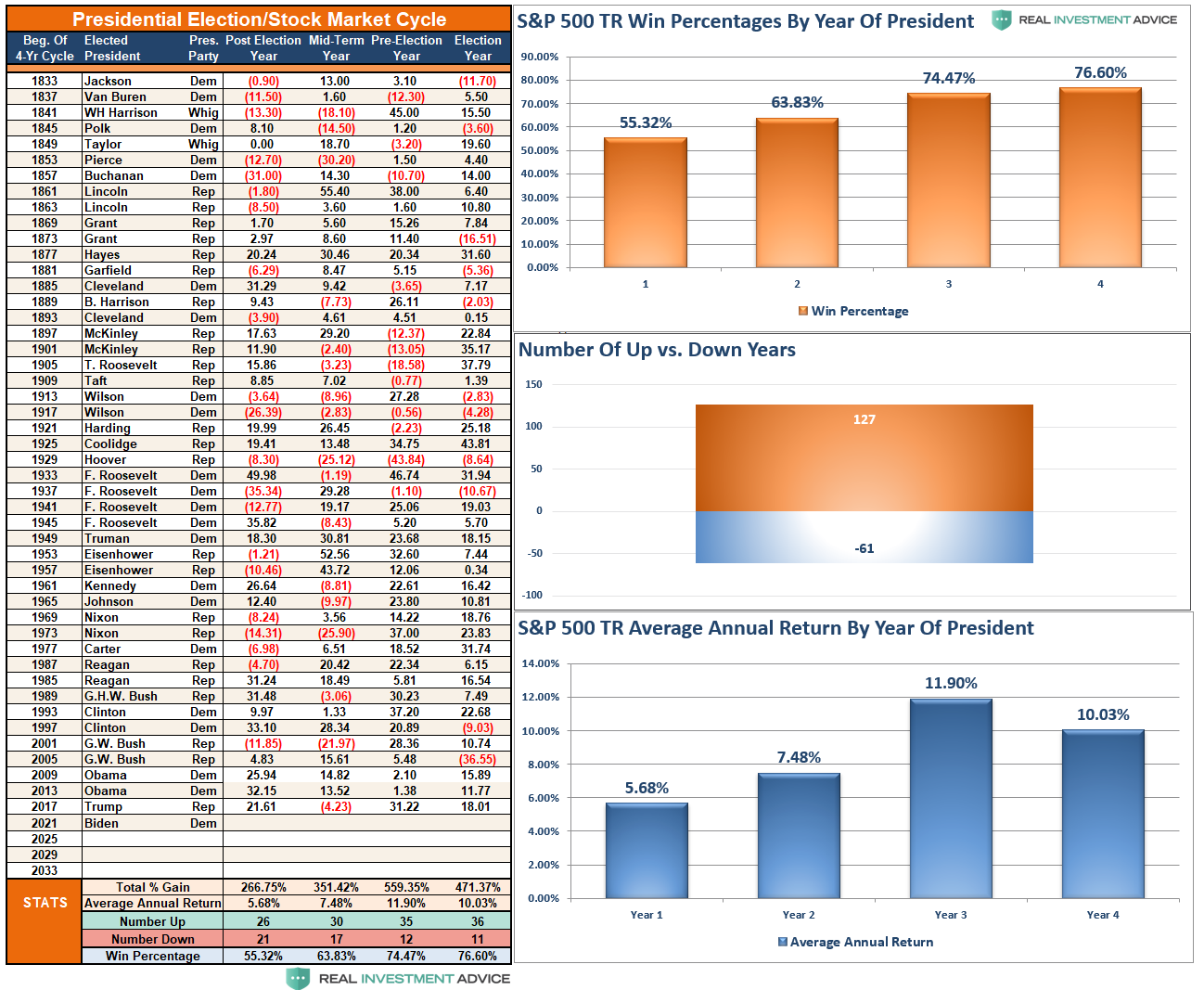 The table and chart below show the statistics by month for the S&P 500. As you will notice, there are some significant outliers like August with a 50% one-month return. These anomalies occurred during the 1930s following the crash of 1929.

The critical point is that January tends to be one of the best return months of the year. Interestingly, the first week of January has already surpassed the historical average and median monthly returns. January also holds the title for the most favorable return months, followed only by December and April. But January is not always a winner. While the statistical odds are high, particularly after a strong start, it does not always end that way. It is worth noting that while January’s maximum positive return 9.2%, the maximum drawdown for the month was the lowest for all months at -6.79%. The odds of January being a positive month greatly outweigh those of it being negative.

With the market already extremely extended, overbought, and euphoric, a mid-month reversal would not be surprising. The panic/euphoria index is at an all-time high. February is potentially a different animal with only 50/50 odds of being positive. So, with investors overly allocated to equities, leveraged, and unhedged, the potential for a negative catalyst to spark a reversion is high.

Speaking of leverage, whenever margin debt has spiked sharply from its 12-month low, such has usually been associated with short- to intermediate-term market peaks. Importantly, given the length of the uninterrupted bull market run from 2009 to the present, the risks are mounting the current bull market cycle has entered into the “mania” phase. Such fundamental realities suggest a more conservative approach to investment allocations.

The Battle Of Wits

“Wait, so you are saying January tends to be a good month, but it could correct.”

The dichotomy reminds me of the scene from “The Princess Bride” where the “Sicilian” is in a “Battle Of Wits” with “The Dread Pirate Roberts.”

While it may seem confusing for investors, it comes down to time frames.

For longer-term investors, particularly those that are nearing retirement, risks are mounting for at least a short-term correction. Such potential outcomes suggest a more cautious approach to equity allocations in portfolios.

No one knows about “mania driven markets” is how long the mania will last. It is often the case that they tend to last longer than you would logically expect.

Such is why it is vital to have a set of guides to follow. As we kick off the New Year, it is an excellent time to set out our “investing resolutions” for the year.

Here are my annual resolutions for the coming year to be a better investor and portfolio manager:

These are the same resolutions I attempt to follow every year. There is no shortcut to being a successful investor. There are only the basic rules, discipline, and focus that is required to succeed long-term.

A Year Of Challenges

At the moment, every analyst is wildly optimistic about the new year. Expectations are high for explosive economic growth, more stimulus, debt-driven infrastructure spending, and 4100-4500 on the S&P by year-end.

Maybe that will be the case. However, investors have priced the market for perfection with high valuations, low interest-rates, and low inflation. Any shortfall in earnings growth, economic recovery, or a rise in interest rates or inflation could have an immediate and negative impact on investors.

When the “bull is running,” we believe we are smarter and better than we actually are. We take on substantially more risk than we realize as we continue to chase market returns and allow “greed” to displace our rational logic. Just as with gambling, success breeds overconfidence as the rising tide disguises our investment mistakes.

Unfortunately, during the subsequent completion of the full-market cycle, our errors return to haunt us. Always too painfully and tragically as the loss of capital exceeds our capability to “hold on for the long-term.”

While most of the financial media and blogosphere suggest that investors should only “buy and hold” for the long-term, the reality of capital destruction during major market declines is a far more pernicious issue.

Pay attention. Things may start to get interesting.