Neel Kashkari Is The Definition Of “Moral Hazard”

Neel Kashkari, in a recent CNBC interview, said, “I don’t see any moral hazard here“ when asked if the Fed’s massive liquidity injections have blown a bubble.

What exactly is the definition of “moral hazard.”

The lack of incentive to guard against risk where one is protected from its consequences, e.g., by insurance.

Take a look at the following chart.

Zombie companies depend on a speculative investment climate for bond issuance for their survival. As discussed in “Recessions Are A Good Thing:” Such also explains why there are currently record levels of “junk bond” issuance in the market.

“Issuance in 2020 through August was $291.9 billion, up 71% year over year. Credit strategists at BofA Global Research now project a full-year primary volume of $375 billion. Such would shatter the current record total of $344.8 billion in 2012, according to LCD.” Interestingly, the number of “Zombie” companies in the market has hit decade highs in 2020. The massive Federal Reserve interventions, bailouts, and zero rates provided the life support failing companies needed. From a market perspective, the liquidity flows from the Federal Reserve increased speculative appetites and investors piled into “zombies” with reckless abandon.

Why?  Because of a lack of incentive to guard against risk as investors believe the Fed is protecting them from the consequences of risk.

In other words, the Fed has “insured them” against potential losses.

Of course, Neel doesn’t see any moral hazard in the charts above. Nor does he see any “moral hazard” from the distortion of the credit markets either. Currently, yield spreads are trading near historically low levels in the midst of an economic recession. Nor does he seem to notice the “moral hazard” of both a surge in debt accumulation and inflated asset prices. Such can only exist as long as rates remain near zero and monetary policy remains accommodative. While Kaskari “doesn’t see any correlation between the Fed’s monetary interventions and the stock market,” even CNBC made the connection.

‘The increase in the Fed’s balance sheet has been in near lockstep with the stock market’s climb. The balance sheet has expanded 10% since October, while the S&P 500 shot up 12%, including notching its best fourth quarter since 2013.’” – CNBC However, there is no “free lunch.”

Not The Worst Of It

For the Fed to continue providing monetary support to the markets, they must monetize nearly every dollar of U.S. debt issuance for the foreseeable future.

“Randy Quarles said the Fed might have to remain engaged in asset buying for some time as financial markets are dealing with too many Treasurys to handle on their own. Total public debt now stands at just under $27 trillion, up from $23 trillion in this year’s first quarter. Debt is also $9.4 trillion higher than in the first quarter of 2008 in the midst of the financial crisis and the Government engaged in a long-running surge in borrowing.” – WSJ

Given the amount of debt required to sustain current economic growth, the Fed has no choice but to continue monetization of the Federal debt indefinitely. 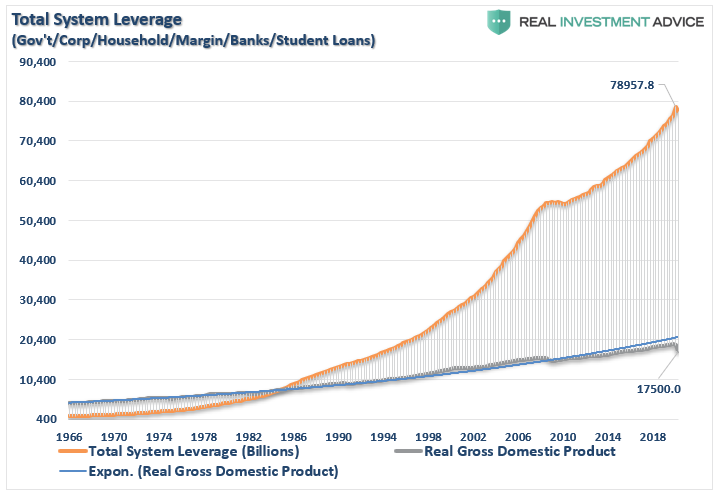 As noted, there is a precedent for a Central Bank becoming nearly the entire holder of the bond market.

Since the financial crisis, Japan has been running a massive “quantitative easing” program, which, on a relative basis, is more than 3-times the size of that in the U.S. While stock markets have performed well, economic prosperity is less than before the century’s turn. Furthermore, despite the BOJ’s balance sheet consuming 80% of the ETF markets, not to mention a sizable chunk of the corporate and government debt market, Japan has been plagued by rolling recessions, low inflation, and low-interest rates. (Japan’s 10-year Treasury rate fell into negative territory for the second time in recent years.) Forgetting The Lessons Of 2008

The debt problem exposes the Fed’s risk and why they are now forever trapped at the zero-bound.

Given economic growth remained elusive over the last decade, it is unlikely doubling the Fed’s balance sheet will improve future outcomes. While Mr. Kashkari fails to recognize the impact of their policies, we now have a decade of experience showing that surging debt and deficits inhibit organic growth.

The US economy is literally on perpetual life support. Recent events show too clearly that unless fiscal and monetary stimulus continues, the economy, and by extension, the stock market, would fail.

Interestingly, while Mr. Kashkari says he “sees no moral hazard,” he recently stated we are “forgetting the lessons of the 2008 financial crisis“:

“The shareholders got bailed out. The boards of directors got bailed out. Management got bailed out. So from their perspective, there was no crisis. We forget the lessons of the 2008 crisis. The bailouts worked too well. Financial crises keep happening ‘because we forget how bad they were.’” – Neel Kashkari

Yes, we bailed out everything, and the consequences of not allowing the system to “clear itself” has led to further distortions in the economy and markets.

The Fed Is The Cause

When the Fed tries to normalize monetary policy, they immediately cause a financial crisis in the market. The resulting destruction of household net worth requires an immediate response by the Fed of zero interest rates and liquidity. Subsequently, they create the next “bubble” to offset the deflation of the last. A recent Fed study shows the result of their actions is the retardation of economic growth and a massive expansion of the “wealth gap,” where the top-10% controls most of the net worth. Since a majority of the population does not, or only marginally, participates in the financial markets, the “boost” has remained concentrated to the upper 10%. The Federal Reserve’s study confirms this. So either the Fed willfully chose to ignore the consequences of their actions, or blatantly lied about it.

Unfortunately, policy-makers, along with the Federal Reserve, are stuck.

“Since politicians want to get re-elected, sending money to households is a way to ‘buy the vote.’ The average American doesn’t understand their demands on the Government for more support creating their economic inequality.”

Conversely, the Federal Reserve serves at the mercy of the central Wall Street banks. Such is why their policy focuses on inflating asset prices for the top 10%, hoping it will one day trickle down to the bottom 90%. After a decade, it hasn’t happened.

As noted, Japan is the path we are following.

“Monetary growth (and QE) can mechanically elevate and inflate equity markets. For example, in the U.S. market, a side effect is that via the ‘repo’ market, it turns into leveraged trades into the equity markets. Again, authorities are running out of bullets and have begun to question the efficacy of monetary largess.

The bigger picture takeaway is that financial engineering does not help an economy. It probably hurts it. If it helped, after mega-doses of the stuff in every imaginable form, the Japanese economy would be humming. But the Japanese economy is doing the opposite. Japan tried to substitute monetary policy for sound fiscal and economic policy. And the result is terrible.” – Doug Kass

One thing is for sure, “repeating the same failed actions and expecting a different outcome” has never been a solution for success.

We are reasonably confident it won’t work this time either.