As I noted this past weekend, 2017 was a year for the record books. Not surprisingly, the strong advance fostered a surge in investor optimism which pushed allocations to equities to the second highest level on record. 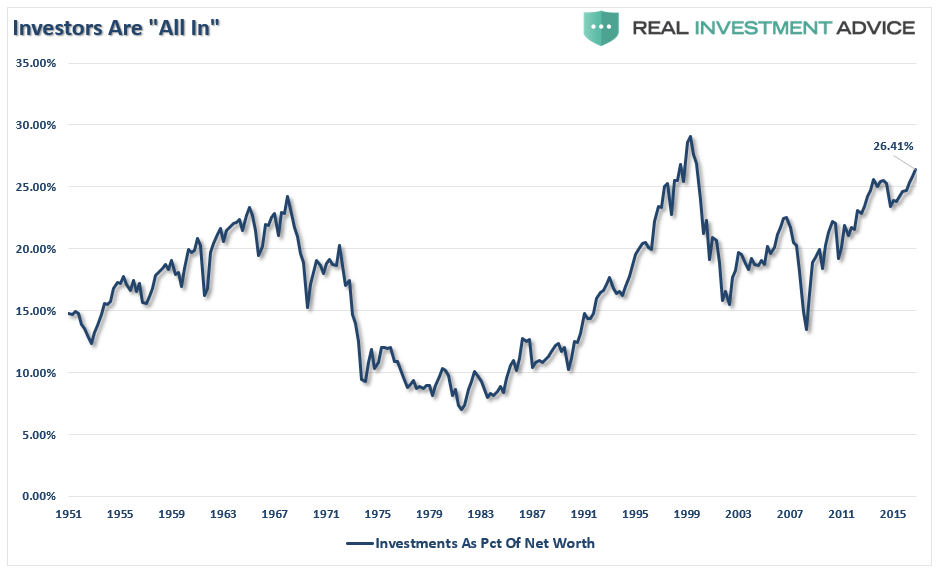 And leveraged to boot. Importantly, don’t mistake record margin debt levels as people borrowing against their portfolio just to make larger investment bets. In reality, they are using leverage to support their lifestyle as well, after all, as long as stocks keep rising it’s like “free money.”  Right?

This is shown in both the level of debt used to support the standard of living and the relationship between real, inflation-adjusted, margin debt and economic growth. The current level of exuberance, and the willingness by individuals to shun risk for the hopes of chasing wealth brought to mind Bob Farrell’s 10-Investment Rules.

I have penned these previously, but these rules should be a staple for any investor who has put their hard earned “savings” at risk in the market. These rules, which are rarely heeded in the heat of bull market, are worth revisiting as we enter into 2018.

The Illustrated 10-Rules Of Investing

Like a rubber band that has been stretched too far – it must be relaxed in order to be stretched again. This is exactly the same for stock prices which are anchored to their moving averages.  Trends that get overextended in one direction, or another, always return to their long-term average. Even during a strong uptrend or strong downtrend, prices often move back (revert) to a long-term moving average. The chart below shows the S&P 500 with a 52-week simple moving average. The bottom chart shows the percentage deviation of the current price of the market from the 52-week moving average. During bullish trending markets, there are regular reversions to the mean which create buying opportunities. However, what is often not stated is that in order to take advantage of such buying opportunities profits should have been taken out of portfolios as deviations from the mean reached historical extremes. Conversely, in bearish trending markets, such reversions from extreme deviations should be used to sell stocks, raise cash and reduce portfolio risk rather than “panic sell” at market bottoms.

The dashed RED lines denote when the markets changed trends from positive to negative. This is the very essence of portfolio “risk” management.

While the chart above showed prices behave on a short-term basis – on a longer-term basis markets also respond to Newton’s 3rd law of motion: “For every action, there is an equal and opposite reaction.”

As I showed in “How Investors Are Dealt A Losing Hand:”

Our chart of the day is a long-term view of price measures of the market. The S&P 500 is derived from Dr. Robert Shiller’s inflation adjusted price data and is plotted on a QUARTERLY basis. From that quarterly data I have calculated: As the chart clearly shows, “prices are bound by the laws of physics.” While prices can certainly seem to defy the law of gravity in the short-term, the subsequent reversion from extremes has repeatedly led to catastrophic losses for investors who disregard the risk.

[The chart below is from my March 2008 seminar discussing that the next recessionary bear market was about to occur.] We will likely add “Bitcoin” to this list in the not-so-distant future?

“A lesson I learned early is that there is nothing new on Wall Street. There can’t be because speculation is as old as the hills. Whatever happens in the stock market today has happened before and will happen again.”

The reality is that excesses, such as we are seeing in the market now, can indeed go much further than logic would dictate. However, these excesses, as stated above, are never worked off simply by trading sideways. Corrections are always just as brutal as the advances were exhilarating. As the chart below shows when the markets broke out of their directional trends – the corrections came soon thereafter. The average individual investor is most bullish at market tops and most bearish at market bottoms. This is due to investor’s emotional biases of “greed” when markets are rising and “fear” when markets are falling. Logic would dictate that the best time to invest is after a massive sell-off; unfortunately, this is exactly the opposite of what investors do. As stated in Rule $5 it is emotions that cloud your decisions and affect your long-term plan.

The chart shows the ratio of bearish funds to bullish funds as compared to the volatility index (VIX) and the ratio of bullish to bearish assets. Rarely have such extremes previously been seen. In the words of Warren Buffett:

“Buy when people are fearful and sell when they are greedy.”

Currently, those “people” are getting extremely greedy.

Breadth is important. A rally on narrow breadth indicates limited participation and the chances of failure are above average. The market cannot continue to rally with just a few large-caps (generals) leading the way. Small and mid-caps (troops) must also be on board to give the rally credibility. A rally that “lifts all boats” indicates far-reaching strength and increases the chances of further gains. The chart above shows the ARMS Index which is a volume-based indicator that determines market strength and breadth by analyzing the relationship between advancing and declining issues and their respective volume.  It is normally used as a short-term trading measure of market strength. However, for longer-term periods the chart shows a weekly index smoothed with a 34-week average. Spikes in the index has generally coincided with near-term market peaks.

Bear markets often start with a sharp and swift decline. After this decline, there is an oversold bounce that retraces a portion of that decline. The longer-term decline then continues, at a slower and more grinding pace, as the fundamentals deteriorate. Dow Theory suggests that bear markets consist of three down legs with reflexive rebounds in between. The chart above shows the stages of the last two primary cyclical bear markets. The point to be made is there were plenty of opportunities to sell into counter-trend rallies during the decline and reduce risk exposure. Unfortunately, the media/Wall Street was telling investors to just “hold on” until hey finally sold out at the bottom.

This rule fits within Bob Farrell’s contrarian nature. As Sam Stovall, the investment strategist for Standard & Poor’s once stated:

As a contrarian investor, and along with several of the points already made within Farrell’s rule set, excesses are built by everyone being on the same side of the trade. Ultimately, when the shift in sentiment occurs – the reversion is exacerbated by the stampede going in the opposite direction

Currently, everyone on Wall Street is optimistic 2018 will turn in another positive year making it the longest streak in history of positive return years for the market. As stated above in Rule #5 – investors are primarily driven by emotions. As the overall markets rise; up to 90% of any individual stock’s price movement is dictated by the overall direction of the market hence the saying “a rising tide lifts all boats.”

Psychologically, as the markets rise, investors begin to believe that they are “smart” because their portfolio is going up. In reality, it is primarily more a function of “luck” rather than “intelligence” that is driving their portfolio.

Investors behave much the same way as individuals who addicted to gambling. When they are winning they believe that their success is based on their skill. However, when they began to lose, they keep gambling thinking the next “hand” will be the one that gets them back on track. Eventually – they leave the table broke. What is interesting is that no matter how many times we continually repeat these “cycles” – as emotional human beings we always “hope” that somehow this “time will be different.” Unfortunately, it never is and this time won’t be either. The only questions are: when will the next bear market begin and will you be prepared for it?

Nevertheless, these rules will benefit investors by helping them to look beyond the emotions and the headlines. Being aware of sentiment can prevent selling near the bottom and buying near the top, which often goes against our instincts.

“I am a long-term, fundamental value, investor.  So these rules don’t really apply to me.”

Individuals are long term investors only as long as the markets are rising. Despite endless warnings, repeated suggestions and outright recommendations; getting investors to sell, take profits and manage your portfolio risks is nearly a lost cause as long as the markets are rising. Unfortunately, by the time the fear, desperation, or panic stages are reached, it is far too late to act and I will only be able to say that I warned you.