There has been a lot of commentary as of late regarding the issue of corporate share repurchases. Even Washington D.C. has chimed into the rhetoric as of late discussing potential bills to limit or eliminate these repurchases. It is an interesting discussion because most people don’t remember that share repurchases were banned for decades prior to President Reagan in 1982.

Even after the ban was lifted, share repurchases were few and far between as during the “roaring bull market of the 90’s” it was more about increasing outstanding shares through stock splits. Investors went crazy over stock splits as they got more shares of the company they loved at half the price. Most didn’t realize, or understand the effective dilution; but for them it was more of a Yogi Berra analogy:

“Can you cut my pizza into four pieces because I can’t eat eight.”

However, following the financial crisis stock splits disappeared and a new trend emerged – share repurchases. Like stock splits, share repurchases in and of themselves are not necessarily a bad thing, it is just the least best use of cash. Instead of using cash to expand production, increase sales, acquire competitors, or buy into new products or services, the cash is used to reduce the outstanding share count and artificially inflate earnings per share. Here is a simple example:

This is a bit of an extreme example but shows the point that share repurchases have a limited, one-time effect, on the company. This is why once a company engages in share repurchases they are inevitably trapped into continuing to repurchase shares to keep asset prices elevated. This diverts ever-increasing amounts of cash from productive investments and takes away from longer term profit and growth.

As shown in the chart below, the share count of public corporations has dropped sharply over the last decade as companies scramble to shore up bottom line earnings to beat Wall Street estimates against a backdrop of a slowly growing economy and sales.

(The chart below shows the differential added per share via stock backs. It also shows the cumulative growth in EPS and Revenue/Share since 2011) As I stated, share repurchases aren’t necessarily a bad thing. It is just the misuse and abuse of them which becomes problematic. It’s not just share repurchases though. In “4-Tools To Beat The Wall Street Estimate Game” we discussed how companies not only use stock repurchases, but a variety of other accounting gimmicks to “meet their numbers.”

The reason that companies do this is simple: stock-based compensation. Today, more than ever, many corporate executives have a large percentage of their compensation tied to company stock performance. A “miss” of Wall Street expectations can lead to a large penalty in the companies stock price.

As shown in the table above, it is not surprising to see that 93% of the respondents pointed to “influence on stock price” and “outside pressure” as the reason for manipulating earnings figures.

The use of stock buybacks has continued to rise in recent years and went off the charts following the passage of tax cuts in 2017. As I wrote in early 2018. while it was widely believed that tax cuts would lead to rising capital investment, higher wages, and economic growth, it went exactly where we expected it would. To wit:

“Not surprisingly, our guess that corporations would utilize the benefits of “tax cuts” to boost bottom line earnings rather than increase wages has turned out to be true. As noted by Axios, in just the first two months of this year companies have already announced over $173 BILLION in stock buybacks.  This is ‘financial engineering gone mad'”

Share buybacks are expected to hit a new record by the end of 2019. 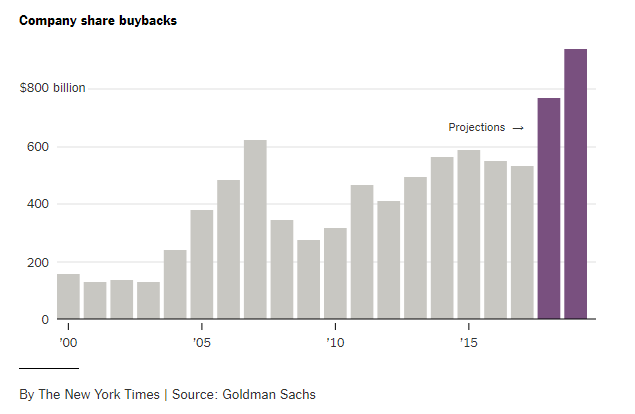 “Share repurchases aren’t bad. It is simply the company returning money to shareholders.”

There is a problem with that statement.

Share buybacks only return money to those individuals who sell their stock. This is an open market transaction so if Apple (AAPL) buys back some of their outstanding stock, the only people who receive any capital are those who sold their shares.

So, who are the ones mostly selling their shares?

As noted above, it’s the insiders, of course, as changes in compensation structures since the turn of the century has become heavily dependent on stock based compensation. Insiders regularly liquidate shares which were “given” to them as part of their overall compensation structure to convert them into actual wealth. As the Financial Times recently penned:

A recent report on a study by the Securities & Exchange Commission found the same:

What is clear, is that the misuse and abuse of share buybacks to manipulate earnings and reward insiders has become problematic. As John Authers recently pointed out:

“Without that $4 trillion in stock buybacks and in a market where trading volume has been falling for decades they never would have been able to soar as high as they have. The chart below plots ‘The Buffett Yardstick’ (total equity market capitalization relative to gross national product) against total net equity issuance (inverted). Since the late-1990’s both valuations and buybacks have been near record highs. Is this just a coincidence? I think it’s safe to say it’s not.” The other problem with the share repurchases is that is has increasingly been done with the use of leverage. The ongoing suppression of interest rates by the Federal Reserve led to an explosion of debt issued by corporations. Much of the debt was not used for mergers, acquisitions or capital expenditures but for the funding of share repurchases and dividend issuance. The explosion of corporate debt in recent years will become problematic if rates rise markedly, further deterioration in credit quality locks companies out of refinancing, or if there is a recessionary drag which forces liquidation of debt. This is something Dallas Fed President Robert Kaplan warned about:

This was recently noted by the Bank of International Settlements.

“If, on the heels of economic weakness, enough issuers were abruptly downgraded from BBB to junk status, mutual funds and, more broadly, other market participants with investment grade mandates could be forced to offload large amounts of bonds quickly. While attractive to investors that seek a targeted risk exposure, rating-based investment mandates can lead to fire sales.”

While share repurchases by themselves may indeed be somewhat harmless, it is when they are coupled with accounting gimmicks and massive levels of debt to fund them in which they become problematic.

The biggest issue was noted by Michael Lebowitz:

“While the financial media cheers buybacks and the SEC, the enabler of such abuse idly watches, we continue to harp on the topic. It is vital, not only for investors but the public-at-large, to understand the tremendous harm already caused by buybacks and the potential for further harm down the road.”

Money that could have been spent spurring future growth for the benefit of investors was instead wasted only benefiting senior executives paid on the basis of fallacious earnings-per-share.

As stock prices fall, companies that performed un-economic buybacks are now finding themselves with financial losses on their hands, more debt on their balance sheets, and fewer opportunities to grow in the future. Equally disturbing, the many CEO’s who sanctioned buybacks, are much wealthier and unaccountable for their actions.

This article may be best summed up with just one word:

Wrongful or criminal deception intended to result in financial or personal gain.