Last week, we saw the first glimpse of the employment fallout caused by the shutdown of the economy due to the virus. To wit:

“On Thursday, initial jobless claims jumped by 3.3 million. This was the single largest jump in claims ever on record. The chart below shows the 4-week average to give a better scale.” This number will be MUCH worse when claims are reported later this morning, as many individuals were slow to file claims, didn’t know how, and states were slow to report them.

The importance is that unemployment rates in the U.S. are about to spike to levels not seen since the “Great Depression.” Based on the number of claims being filed, we can estimate that unemployment will jump to 15-20% over the next quarter as economic growth slides 8%, or more. (I am probably overly optimistic.) This is a critical point. Consumer confidence is the primary factor of consumptive behaviors, which is why the Federal Reserve acted so quickly to inject liquidity into the financial markets. While the Fed’s actions may prop up financial markets in the short-term, it does little to affect the most significant factor weighing on consumers – their jobs.

The chart below is our “composite” confidence index, which combines several confidence surveys into one measure. Notice that during each of the previous two bear market cycles, confidence dropped by an average of 58 points. With consumer confidence just starting its reversion from high levels, it suggests that as job losses rise, confidence will slide further, putting further pressure on asset prices. Another way to analyze confidence data is to look at the composite consumer expectations index minus the current situation index in the reports.

Similarly, given we have only started the reversion process, bear markets end when deviations reverse. The differential between expectations and the current situation, as you can see below, is worse than the last cycle, and only slightly higher than before the “dot.com” crash. If you are betting on a fast economic recovery, I wouldn’t.

There is a fairly predictable cycle, starting with CEO’s moving to protect profitability, which gets worked through until exhaustion is reached. As unemployment rises, we are going to begin to see the faults in the previous employment numbers that I have repeatedly warned about over the last 18-months. To wit:

“There is little argument the streak of employment growth is quite phenomenal and comes amid hopes the economy is beginning to shift into high gear. But while most economists focus at employment data from one month to the next for clues as to the strength of the economy, it is the ‘trend’ of the data, which is far more important to understand.”

That “trend” of employment data has been turning negative since President Trump was elected, which warned the economy was actually substantially weaker than headlines suggested. More than once, we warned that an “unexpected exogenous event” would exposure the soft-underbelly of the economy.

The virus was just such an event.

While many economists and media personalities are expecting a “V”-shaped recovery as soon as the virus passes, the employment data suggests an entirely different outcome.

The chart below shows the peak annual rate of change for employment prior to the onset of a recession. The current cycle peaked at 2.2% in 2015, and has been on a steady decline ever since. At 1.3%, which predated the virus, it was the lowest level ever preceding a recessionary event. All that was needed was an “event” to start the dominoes falling. When we see the first round of unemployment data, we are likely to test the lows seen during the financial crisis confirming a recession has started. It is worth noting that NO mainstream economists, or mainstream media, were predicting a recession in 2020. However, as we noted in 2019, the inversion of the “yield curve,” predicted exactly that outcome.

“To CNBC’s point, based on this lagging, and currently unrevised, economic data, there is ‘NO recession in sight,’ so you should be long equities, right?

Which indicator should you follow? The yield curve is an easy answer.

While everybody is ‘freaking out’ over the ‘inversion,’it is when the yield-curve ‘un-inverts’ that is the most important.

The chart below shows that when the Fed is aggressively cutting rates, the yield curve un-inverts as the short-end of the curve falls faster than the long-end. (This is because money is leaving ‘risk’ to seek the absolute ‘safety’ of money markets, i.e. ‘market crash.’)”

I have dated a few of the key points of the “inversion of the curve.” As of today, the yield-curve is now fully un-inverted, denoting a recession has started. What we will see in the next several employment reports are vastly negative numbers as the economy unwinds.

Lastly, while the BLS continually adjusts and fiddles with the data to mathematically adjust for seasonal variations, the purpose of the entire process is to smooth volatile monthly data into a more normalized trend. The problem, of course, with manipulating data through mathematical adjustments, revisions, and tweaks, is the risk of contamination of bias.

We previously proposed a much simpler method to use for smoothing volatile monthly data using a 12-month moving average of the raw data as shown below. 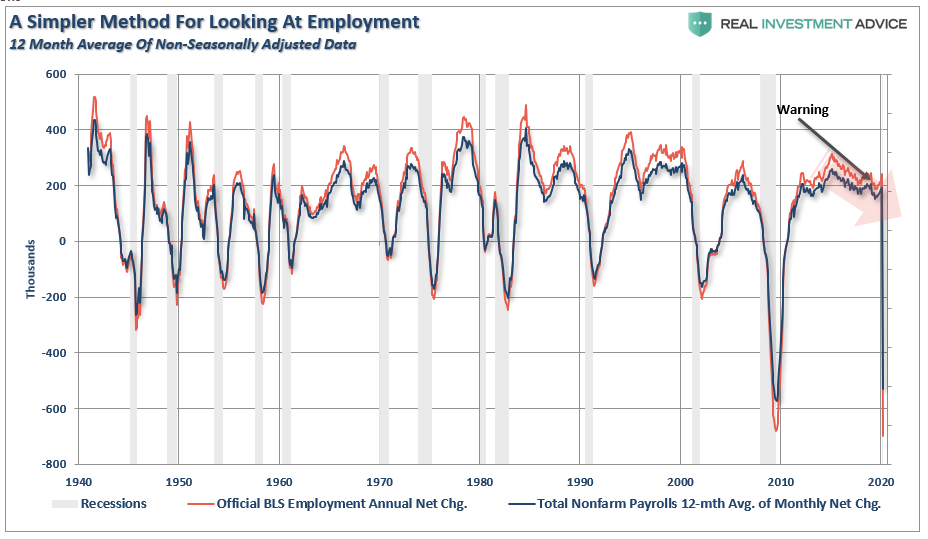 Notice that near peaks of employment cycles the BLS employment data deviates from the 12-month average, or rather “overstates” the reality. However, as we will now see to be the case, the BLS data will rapidly reconnect with 12-month average as reality emerges.

Importantly, there is one aspect to all the charts above which remains constant. No matter how you choose to look at the data, peaks in employment growth occur prior to economic contractions, rather than an acceleration of growth.

Just as “baby boomers” were finally getting back to the position of being able to retire following the 2008 crash, the “bear market” has once again put those dreams on hold. Of course, there were already more individuals over the age of 55, as a percentage of that age group, in the workforce than at anytime in the last 50-years. However, we are likely going to see a very sharp drop in those numbers as “forced retirement” will surge. The group that will to be hit the hardest are those between 25-54 years of age. With more than 15-million restaurant workers being terminated, along with retail, clerical, leisure, and hospitality workers, the damage to this demographic will be the heaviest. There is a decent correlation between surges in the unemployment rate and the decline in the labor-force participation rate of the 25-54 age group. Given the expectation of a 15%, or greater, unemployment rate, the damage to this particular age group is going to be significant. Unfortunately, the prime working-age group of labor force participants had only just returned to pre-2008 levels, and the same levels seen previously in 1988. Unfortunately, it may be another decade before we see those employment levels again.

The employment impact is going to felt for far longer, and will be far deeper, than the majority of the mainstream media and economists expect. This is because they are still viewing this as a “singular” problem of a transitory virus.

The virus was simply the catalyst which started the unwind of a decade-long period of debt accumulation and speculative excesses. Businesses, both small and large, will now go through a period of “culling the herd,” to lower operating costs and maintain profitability.

There are many businesses that will close, and never reopen. Most others will cut employment down to the bone and will be very slow to rehire as the economy begins to recover. Most importantly, wage growth was already on the decline, and will be cut deeply in the months to come. Lower wage growth, unemployment, and a collapse in consumer confidence is going to increase the depth and duration of the recession over the months to come. The contraction in consumption will further reduce revenues and earnings for businesses which will require a deeper revaluation of asset prices.

I just want to leave you with a statement I made previously:

“Every financial crisis, market upheaval, major correction, recession, etc. all came from one thing – an exogenous event that was not forecast or expected.

This is why bear markets are always vicious, brutal, devastating, and fast. It is the exogenous event, usually credit-related, which sucks the liquidity out of the market, causing prices to plunge. As prices fall, investors begin to panic-sell driving prices lower which forces more selling in the market until, ultimately, sellers are exhausted.

It is the same every time.”

Over the last several years, investors have insisted the markets were NOT in a bubble. We reminded them that everyone thought the same in 1999 and 2007.

Throughout history, financial bubbles have only been recognized in hindsight when their existence becomes “apparently obvious” to everyone. Of course, by that point is was far too late to be of any use to investors and the subsequent destruction of invested capital.

It turned out, “this time indeed was not different.” Only the catalyst, magnitude, and duration was.

Pay attention to employment and wages. The data suggests the current “bear market” cycle has only just begun.