Consumers Are Keeping The US Out Of Recession? Don’t Count On It.

“Like a stiff tent pole, consumers are keeping the U.S. economy propped up. And it looks like they’ll have to do so for at least the next year.

Strong consumer spending has given the economy a backbone to withstand spine-tingling political fights at home and abroad. Households boosted spending by 4.6% in the spring, and nearly 3% in the summer, to offset back-to-back drops in business investment and whispered talk of recession.”

That statement is correct, and considering the consumer makes up roughly 70% of economic growth, this is why you “never count the consumer out.”

The most valuable thing about the consumer is they are “financially stupid.” But what would expect from a generation whose personal motto is “YOLO – You Only Live Once.”

This is why companies spend billions on social media, personal influencers, television, radio, and internet advertising. If there is an outlet where someone will watch, listen, or read, you will find ads on it. Why? Because consumers have been psychologically bred to “shop till they drop.” This record level of household debt is also why the Fed’s measure of “Saving Rates” is entirely wrong:

“The ‘gap’ between the ‘standard of living’ and real disposable incomes is shown below. Beginning in 1990, incomes alone were no longer able to meet the standard of living so consumers turned to debt to fill the ‘gap.’ However, following the ‘financial crisis,’ even the combined levels of income and debt no longer fill the gap. Currently, there is almost a $2654 annual deficit that cannot be filled.” Delayed gratification is a thing of the past.

If consumers were even partially responsible, financial guru’s like Dave Ramsey wouldn’t have a job counseling people on how to get out of the “debt trap” they got themselves into.

However, as Steve Liesman once stated on CNBC:

“Debt is always pointed out as a negative thing, when in fact debt is the great bridge between working hard and playing hard in this country.This country has been built on consumer debt.”

While the statement is clearly wrongheaded, it does show the importance of consumer spending as it relates to keeping the economy GOING.  Note, that I said “going,” and not “growing,” Take a look at the chart below: In the 1980’s and 90’s consumption, as a percentage of the economy, grew from roughly 61% to 68% currently.  The increase in consumption was largely built upon a falling interest rate environment, lower borrowing costs, and relaxation of lending standards.

The importance of that statement should not be dismissed. It has required more debt to increase consumption by 1% of the economy since 2000 than it did to increase it by 6% from 1980-2000. The problem is quite clear. With interest rates already at historic lows, consumers already heavily leveraged and economic growth running at sub-par rates – there is not likely a capability to increase consumption as a percent of the economy to levels that would replicate the economic growth rates of the past.

Debt acts as a “cancer” on an individual’s wealth as it siphons potential savings from income to service the debt. Rising levels of debt means rising levels of debt service which reduces actual disposable personal incomes that could be saved or reinvested back into the economy.

The mirage of consumer wealth has been a function of surging debt levels. “Wealth” is not borrowed but “saved” and as shown in the chart above this is a lesson that too few individuals have learned.

Consumption Is Function Of A Paycheck

Currently, it is believed the “consumer is just fine” because they are continuing to spend at a fairly healthy clip.

However, this spending is based on “confidence” and currently, that level of confidence is at historically high levels, as shown below. (The chart below shows our composite confidence index, which combines both the University of Michigan and Conference Board measures.) If we overlay that confidence composite with personal consumption expenditures, it is not surprising there is a reasonably high correlation. Not surprisingly, since retail sales make up 40% of personal consumption expenditures, it also has a high correlation with consumer confidence. Do you know what else has a high correlation with consumer confidence? This should be a relatively obvious connection.

No job = No paycheck = No spending.

This is a point Jeffry misses in his article when he states:

“Most Americans feel secure about their jobs and income prospects, with layoffs and unemployment at a 50-year low. They’re earning more money, saving more than they used to and are not as burdened by debt. That’s why surveys show consumer confidence remain near post 2008 recession highs.”

That is true. Confidence is high because employment is high, and consumers operate in a microcosm of their own environment. As we noted just recently:

“[Who is a better measure of economic strength?] Is it the consumer cranking out work hours, raising a family, and trying to make ends meet? Or the CEO of a company who is watching sales, prices, managing inventory, dealing with collections, paying bills, and managing changes to the economic landscape on a daily basis? A quick look at history shows this level of disparity (between consumer and CEO confidence) is not unusual. It happens every time prior to the onset of a recession. 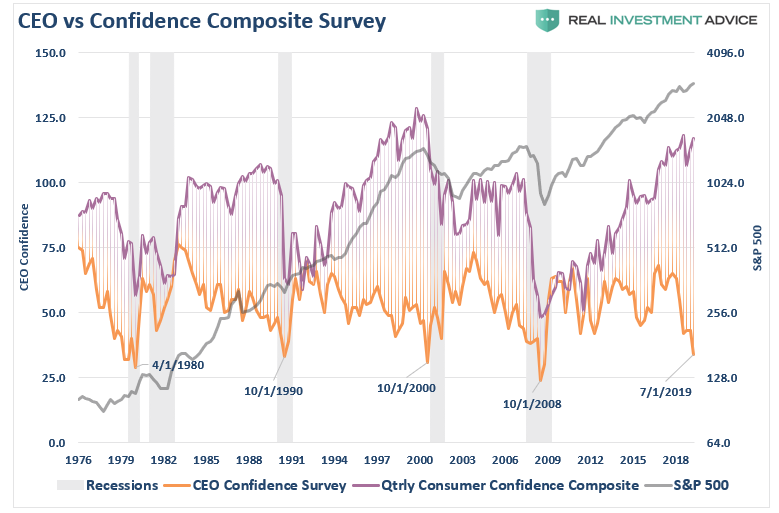 It is hard for consumers to remain “confident,” and continue spending, when they have lost their source of income. This is why consumer confidence doesn’t “go gently into the night,” but rather “screaming into the abyss.”

Given that GDP is roughly 70% consumption, deterioration in economic confidence is a hugely important factor. The most significant factors weighing on that consumption, as noted above, are job losses which crush spending decisions by consumers.

This starts a virtual spiral in the economy as reductions in spending put further pressures on corporate profitability. Lower profits lead to more unemployment, and lower asset prices, until the cycle is complete. Note, bear markets end when the negative deviation reverses back to positive.

Are consumers currently keeping the economy out of recession? You bet.

Will it stay that way? Probably not.

Records are records for a reason. It is where things end, not begin, and all economics cycle.

What CEO confidence is telling us is that we are likely nearing the end of this current cycle. Since employers are slow to hire, and slow to fire, the current slowdown in hiring is an early indication the end of the cycle is approaching.

When job losses begin to accelerate, confidence will fall very quickly, as does consumer spending, and then the markets. While the financial media is salivating over new “records” being set for this “bull market,” here is something to think about.

Currently, everything is just about “as good as it can get.”

Just remember, that for every “bull market” there MUST be a “bear market.” It is part of the “full-market cycle.”

How does every bear market begin?

Slowly at first, then all of a sudden.