Capitalism Is The Worst, Except For All The Rest – Part 3

Part 2 – The Myths Of “Broken Capitalism”

In Part 1, we discussed how “Capitalism” was distorted by Wall Street. In Part 2, we reviewed some of the “myths” of capitalism, which are used to garner “votes” by politicians but are not really true. Most importantly, we discussed the fallacy that “more Government” is the answer in creating equality as it impairs economic opportunity.

I want to conclude this series with a discussion on the fallacy of socialism and equality, and provide a some thoughts on how you can capitalize on capitalism.

Envy was once considered to be one of the seven deadly sins before it became one of the most admired virtues under its new name, “social justice."

The “entire premise” of the socialist agendas assumes money is unlimited. Since there is only a finite amount of money created through taxation of citizens each year the remainder must come from the issuance of debt.

Therefore, to promote an agenda which requires unlimited capital commitments to fulfill, the basic premise has to be “debt doesn’t matter.”

Kevin Muir penned “Everything You Wanted To Know About MMT” which delves into what MMT proposes to be. To wit:

“Modern Monetary Theory is a macroeconomic theory that contends that a country that operates with a sovereign currency has a degree of freedom in their fiscal and monetary policy which means government spending is never revenue constrained, but rather only limited by inflation.”

In other words, debts and deficits do not matter as long as the Government can print the money it needs, to pay for what it wants to pay for.

It is the proverbial “you can have your cake and eat it too” theory. It just hasn’t exactly worked out that way. Deficits Are Not Self-Financing

The premise of MMT is that government “deficit” spending is not a problem because the spending into “productive investments” pay for themselves over time.

But therein lies the problem – what exactly constitutes “productive investments?”

For that answer, we can turn to Dr. Woody Brock, an economist who holds 5-degrees in math and economics and is the author of “American Gridlock” for the answer.

“The word ‘deficit’ has no real meaning.

‘Country A spends $4 Trillion with receipts of $3 Trillion. This leaves Country A with a $1 Trillion deficit. In order to make up the difference between the spending and the income, the Treasury must issue $1 Trillion in new debt. That new debt is used to cover the excess expenditures, but generates no income leaving a future hole that must be filled.

Country B spends $4 Trillion and receives $3 Trillion income. However, the $1 Trillion of excess, which was financed by debt, was invested into projects, infrastructure, that produced a positive rate of return. There is no deficit as the rate of return on the investment funds the ‘deficit’ over time.’

For government “deficit” spending to be effective, the “payback” from investments made through debt must yield a higher rate of return than the interest rate on the debt used to fund it.

The problem, for MMT and as noted by Dr. Brock, is that government spending has shifted away from productive investments, like the Hoover Dam, which creates jobs (infrastructure and development) to primarily social welfare, defense, and debt service which has negative rates of return.

However, there is clear evidence that increasing debts and deficits DO NOT lead to either stronger economic growth or increasing productivity. As Michael Lebowitz recently showed:

“Since 1980, the long term average growth rate of productivity has stagnated in a range of 0 to 2% annually, a sharp decline from the 30 years following WWII when productivity growth averaged 4 to 6%. While there is no exact measure of productivity, total factor productivity (TFP) is considered one of the best measures. Data for TFP can found here.” 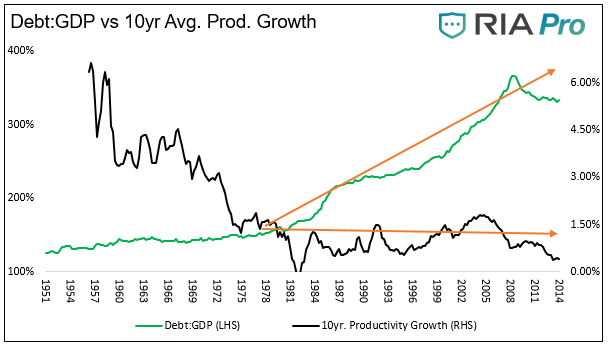 “This reinforces the message from the other debt related graphs – over the last 30 years the economy has relied more upon debt growth and less on productivity to generate economic activity.”

As noted above, since the bulk of the debt issued by the U.S. has been unproductively squandered on increases in social welfare programs and debt service, there is a negative return on investment. Therefore, the larger the balance of debt becomes, the more economically destructive it is by diverting an ever-growing amount of dollars away from productive investments to service payments.

For the 30-years from 1952 to 1982, the economic surplus fostered a rising economic growth rate, which averaged roughly 8% during that period. Today, with the economy expected to grow at just 2% over the long-term, the economic deficit has never been greater, and continues to grow.

MMT is not a free lunch. MMT is paid for by reducing the value of the dollar, and is a hidden tax by reducing the purchasing power of everyone holding dollars. The problem is that inflation tends to harm the poor and middle class, but benefits the wealthy.

While MMT promises “free college,” “healthcare for all,” “free childcare,” and “jobs for all” with no consequences, it will deliver inflation, generate further wealth/income inequality, and greater levels of social instability and populism.

How do we know this? Because it is the same outcome seen in every other country that endeavored in programs of unbridled debts and deficits.

MMT sounds great at the conversational level, but so does “communism” and “socialism.”

In practice, the outcomes have been vastly different than the theory.

Why Wealth Inequality Is A Good Thing

Just recently, Aaron Back accidentally made the case for why we should foster “capitalism” over “socialism.”

"The introduction of capitalist reforms to Communist China has lifted hundreds of millions out of poverty, but it had a drawback: rising income inequality." https://t.co/tsAHyUdeEl

What Aaron exposed in his rush to jump on the “inequality bandwagon” was what capitalism provided. Let’s break down his statement:

Point 3 is the most important.

“Capitalism gets its power—and has created the greatest increase in social welfare in history—from embracing human ingenuity and the positive forces of innovation, open markets and competition. Perhaps the greatest strength of free markets is their ability to nimbly adjust to new ideas and situations and find the most efficient system. Markets are always looking to do things better. We can apply that same logic to capitalism itself to improve capitalism further so that it can provide even greater social welfare.” – Daniel LaCalle

Let me clarify something for you.

Capitalism Is The Worst, Except For All The Rest

One thing is for certain. Life isn’t fair.

“The rich have everything, and all I have is a mountain of student debt and a crappy job.”

“Capitalism is an imperfect economic system, because differential performance in the pursuit of economic success – as well as luck – results in there being (a) some people who are less successful as well as some who are more and (b) a few who are glaringly successful.

I’m 100% convinced that the capitalist system has produced the most aggregate gains for our society, exceptional overall progress, and a better life for most.

In the same way, I’m convinced that capitalism is the worst economic system . . . except for all the rest.”

Capitalism is the only system that will provide you the ability to achieve unbridled success.

Yes, the Government can pay for anything you want. The problem is that it requires those who are succeeding to pay for it.

Do you want to work hard, sacrifice, and take on an exceeding amount of risk to achieve success only to pay for those who don’t?

This is why socialism always fails.

“The greater good can only be achieved by making the good greater.” – Daniel LaCalle