A Major Support For Asset Prices Has Reversed

In 2019, we wrote about how corporate share repurchases, or “stock buybacks,” had accounted for nearly all buying in the market. A year later, that significant support for asset prices has reversed.

While markets have certainly been on a tear this year, due to massive amounts of Federal Stimulus, it has been an advance solely on valuation expansion. While the decline in 2020 earnings was no surprise given the pandemic, earnings were already declining in 2019. The chart shows this in the return attribution of the S&P 500. Notably, while investors are willing to “pay more for less” in earnings, revenue growth deteriorated more.

Such is not a new phenomenon. Since 2009, sales per share, what happens at the top of the income statement, has cumulatively grown by just 43% through Q3-2020. It is hard to justify bidding up stocks by 400% based on meager revenue growth. So, Wall Street created metrics like “Operating Earnings” to provide justification. The problem with “Operating Earnings” is they are heavily “fudged” to create a more optimistic picture. 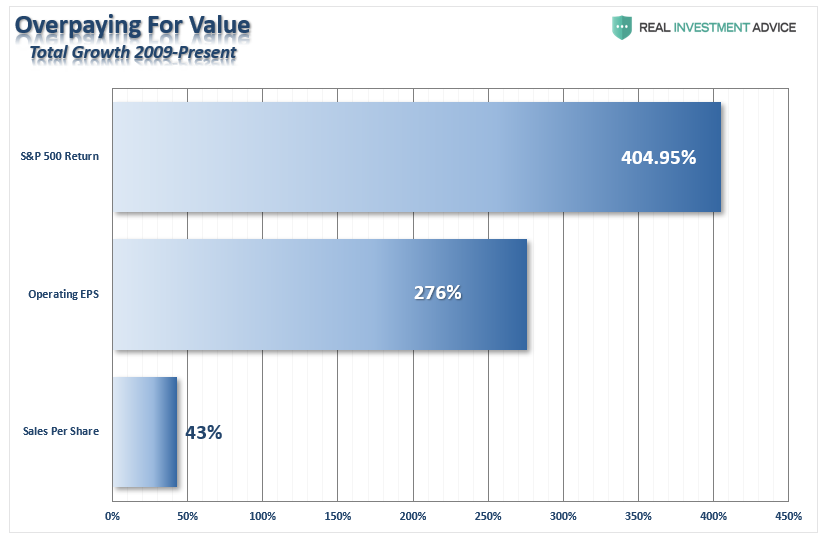 What do I mean by “fudged?”

“The tricks are well-known: A difficult quarter can be made easier by releasing reserves set aside for a rainy day. Or, recognizing revenues before sales are made. A good quarter is often the time to hide a big “restructuring charge” that would otherwise stand out like a sore thumb.

What is more surprising though is CFOs’ belief these practices leave a significant mark on companies’ reported profits and losses. When asked about the magnitude of the earnings misrepresentation, the study’s respondents said it was around 10% of earnings per share.“

The reason companies do this is simple: stock-based compensation. Today, more than ever, corporate executives have a large percentage of their compensation tied to stock performance. A “miss” of Wall Street expectations can lead to a large penalty in the companies stock price.

In a survey conducted with corporate executives, 93% of the respondents pointed to “influence on stock price” and “outside pressure” as the reason for manipulating earnings figures.

The use of stock buybacks has continued to rise in recent years and went off the charts following tax cuts in 2017. As I wrote in early 2018. most thought tax cuts would lead to rising capital investment, higher wages, and economic growth. However, it went where we expected it would. To wit:

“Not surprisingly, our guess that corporations would utilize the benefits of ‘tax cuts’ to boost bottom line earnings rather than increase wages has turned out to be true.

‘In just the first two months of this year companies have already announced over $173 BILLION in stock buybacks.  This is ‘financial engineering gone mad’” – Axios:

The heavy use of buybacks turned cumulative revenue growth of 43% into a 276% gain in operating earnings. To gain a better perspective on the real growth of corporations’ profitability over the last decade, just look at corporate profits after tax. These are the profits reported to the IRS for tax purposes and includes all the write-offs, expenses, and other items. Considering profits didn’t grow from 2014-2019 and then collapsed to 2010 levels in 2020, it is hard to justify current valuations. However, while retail investors are piling into stocks, the corporate executives are cashing out.

One can not argue the changing dynamics of the market from “passive indexing.” Currently, the new “gold rush” on Wall Street is to issue “exchange-traded funds,” also known as a “product,” to meet retail investor demands. (Also known as “dumb money.”) As retail investors’ exuberance to take on more risk increases, they push more money into equity-based funds. Currently, we are back to levels seen before the 20% decline in 2018. Importantly, as money flows into these funds, the underlying company stock prices rise. This all aligns with SentimenTrader’s “Dumb Money” index hitting the highest levels in history. Therefore, it should be of no surprise that corporate executives, who, as noted, have large exposures to stock-based compensation, are “cashing out.”

If the “executives” are cashing out while you are rushing in, maybe ask what they know that you don’t.

Such brings us to the main point of our analysis.

While corporations struggled with profit growth, they posted steller “operating earnings” growth. Such was mainly due to tax cuts, accounting gimmicks, and share buybacks. As discussed previously in “Peak Buybacks:”

“The misuse, and abuse, of share buybacks to manipulate earnings and reward insiders has become problematic. As John Authers pointed out:

Between the Fed injecting massive amounts of liquidity, and corporations buying back shares, there have been no other real buyers in the market.”

But here is the crucial point we made last September in that article:

“CEO’s make decisions on how they use their cash. If concerns of a recession persist, companies will become more conservative on the use of their cash, rather than continuing to repurchase shares.” – September 2019

As we also stated in that article:

“When stock prices do eventually fall, companies that performed un-economic buybacks would find themselves with financial losses on their hands, more debt on their balance sheets, and fewer opportunities to grow in the future. Equally disturbing, the many CEO’s who sanctioned buybacks, are much wealthier and unaccountable for their actions.”

As we saw, the same companies which have spent billions on “share buybacks” over the last decade were the first ones in line for a Government bailout earlier this year.

Now, companies are hoarding cash as we approach the end of the year to ensure their survival against a weaker economic environment in 2021.

Of course, the critical question is what that means for the markets.

A Reversal Of Buybacks

While corporations are increasing their cash hoards and issuing debt, they are taking advantage of investors’ “irrational exuberance” to sell shares into the market. The outcome is the same. There is less corporate demand underlying the financial markets.

Review the chart above that showed nearly all of the previous equity buying came from corporations. Corporations have now switched by markedly decreasing share buybacks from the 2015-2019 levels. Now they are beginning to increase outstanding shares. Notably, over the last  20-years, the only two previous periods where corporations were increasing the number of shares outstanding was during the 2000 and 2008 recessions. (Important note: Increasing shares counts reverses the bottom-line EPS boost.) The Problem Of Debt

Corporations also have another problem.

Over the last several years, debt was the funding source for a large chunk of the share buybacks completed. As Goldman Sachs noted in 2019, an analysis of corporate balance sheets found that dividend and stock buybacks accounted for 103.8% of their free cash flow. Meaning they were paying more out in cash than they had on hand.

The chart below compares the total amount of corporate debt issued versus the reduction in the number of shares. It shouldn’t be surprising to see that when corporations have previously been “net issuers” of stocks versus “buyers,” asset markets have not performed well. The explosion of corporate debt has become problematic in recent years and is a significant concern for the Fed. Such is why they launched into buying corporate debt following the onset of the pandemic. As asset prices decrease, many companies become unable to refinance their debt, or worse, forced to liquidate. With the current debt-to-GDP ratio even higher today than before the “pandemic,” the trap has grown. Such is something Dallas Fed President Robert Kaplan warned about:

Next year, with a large source of support removed from the market, it could become more challenging for equity investors.

Such is even more likely if the Fed gets its wish for inflation, or bond bears get higher rates. That could be the worse possible outcome for equity markets as the supports of low rates, debt issuance, and “valuation” support all reverse.

Investors are currently following the Chuck Prince investing mantra by “dancing while the music is playing.”

It is worth remembering that eventually, the song ends.