The Fed & The Stability/Instability Paradox

Well, this certainly seems to be the path that the Federal Reserve, and global Central Banks, have decided take.

Yesterday, the Fed lowered interest rates by a quarter-point and maintained their “dovish” stance but suggested they are open to “allowing the balance sheet to grow.” While this isn’t anything more than just stopping Q.T. entirely, the markets took this as a sign that Q.E. is just around the corner.

That expectation is likely misguided as the Fed seems completely unconcerned of any recessionary impact in the near-term. However, such has always been the case, historically speaking, just before the onset of a recession. This is because the Fed, and economists in general, make predictions based on lagging data which is subject to large future revisions. Regardless, the outcome of the Fed’s monetary policies has always been, without exception, either poor, or disastrous.

“In the U.S., the Federal Reserve has been the catalyst behind every preceding financial event since they became ‘active,’ monetarily policy-wise, in the late 70’s. As shown in the chart below, when the Fed has lifted the short-term lending rates to a level higher than the 2-year rate, bad ‘stuff’ has historically followed.” The idea of pushing limits to extremes also applies to stock market investors. As we pointed out on Tuesday, the risks of a liquidity-driven event have increased markedly in recent months. Yet, despite the apparent risk, investors have virtually “no fear.” (Bullish advances are supported by extremely low levels of volatility below the long-term average of 19.) “First, “record levels” of anything are records for a reason. It is where the point where previous limits were reached. Therefore, when a ‘record level’ is reached, it is NOT THE BEGINNING, but rather an indication of the MATURITY of a cycle. While the media has focused on employment, record stock market levels, etc. as a sign of an ongoing economic recovery, history suggests caution.” In the “rush to be bullish” this a point often missed. When markets are hitting “record levels,” it is when investors get “the most bullish.” That is the case currently with retail investors “all in.” Conversely, they are the most “bearish” at the lows.

It is just human nature.

“What we call the beginning is often the end. And to make an end is to make a beginning. The end is where we start from.” – T.S. Eliot

The point here is that “all things do come to an end.” The further from the “mean” something has gotten, the greater the reversion is going to be. The two charts below illustrate this point clearly. 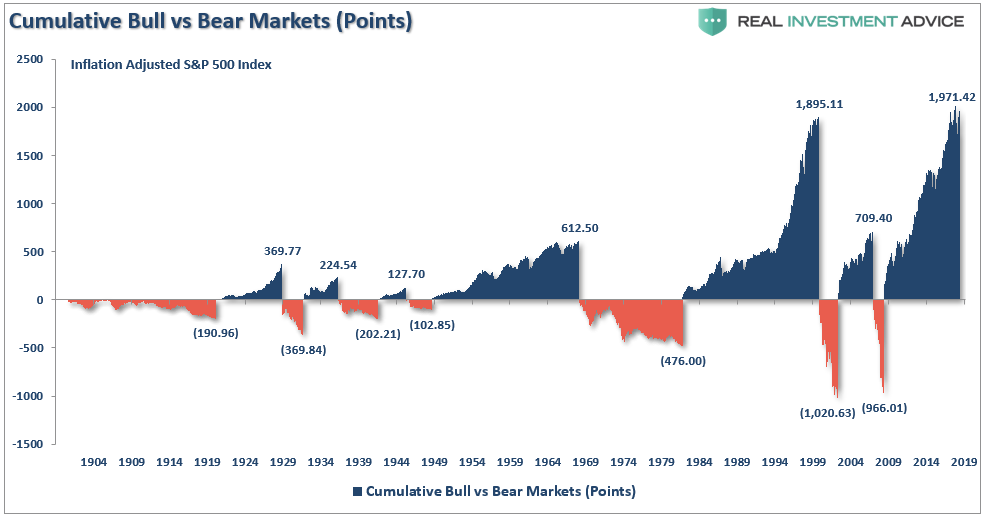 Bull markets, with regularity, are almost entirely wiped out by the subsequent bear market.

Despite the best of intentions, market participants never act rationally.

The Instability Of Stability

Currently, investors have been led to believe that no matter what happens, the Fed can bail out the markets and keep the bull market going for a while longer. Or rather, as Dr. Irving Fisher once uttered:

Interestingly, the Fed is dependent on both market participants, and consumers, believing in this idea. As we have noted previously, with the entirety of the financial ecosystem now more heavily levered than ever, due to the Fed’s profligate measures of suppressing interest rates and flooding the system with excessive levels of liquidity, the “instability of stability” is now the most significant risk.

The “stability/instability paradox” assumes that all players are rational and such rationality implies an avoidance of complete destruction. In other words, all players will act rationally, and no one will push “the big red button.”

The Fed is highly dependent on this assumption as it provides the “room” needed, after more than 10-years of the most unprecedented monetary policy program in U.S. history, to try and navigate the risks that have built up in the system.

Unfortunately, that has never been the case.

The behavioral biases of individuals is one of the most serious risks facing the Fed. Throughout history, as noted above, the Fed’s actions have repeatedly led to negative outcomes despite the best of intentions. As noted Tuesday, the risk to this entire house of cards is a credit-related event.

“Anyone wonder what might happen should passive funds become large net sellers of credit risk? In that event, these indiscriminate sellers will have to find highly discriminating buyers who–you guessed it–will be asking lots of questions. Liquidity for the passive universe–and thus the credit markets generally–may become very problematic indeed.

The recent actions by Central Banks certainly suggest risk has risen. Whether this was just an anomalous event, or an early warning, it is too soon to know for sure. However, if there is a liquidity issue, the risk to ‘uniformed investors’ is substantially higher than most realize.

Risk concentration always seems rational at the beginning, and the initial successes of the trends it creates can be self-reinforcing. That is, until suddenly, and often without warning, it all goes “pear\-shaped.”

In November and December of last year, it was the uniformity of the price moves which revealed the fallacy “passive investing” as investors headed for the door all at the same time. While, that rout was quickly forgotten as markets stormed back to all-time highs, on “hopes” of Central Bank liquidity and “trade deals.”

The difference today, versus then, are the warning signs of deterioration in areas which pose a direct threat to everyone “acting rationally.”

“While yields going to zero] certainly sounds implausible at the moment, just remember that all yields globally are relative. If global sovereign rates are zero or less, it is only a function of time until the U.S. follows suit. This is particularly the case if there is a liquidity crisis at some point. Risk is clearly elevated as the Fed is cutting rates despite the “economic data” not supporting it. This is clearly meant to keep everyone acting rationally for now.

The problem comes when they don’t.

All of this underscores the single biggest risk to your investment portfolio.

In extremely long bull market cycles, investors become “willfully blind,” to the underlying inherent risks. Or rather, it is the “hubris” of investors they are now “smarter than the market.”

Yet, the list of concerns remains despite being completely ignored by investors and the mainstream media.

For now, none of that matters as the Fed seems to have everything under control.

Yes, our investment portfolios remain invested on the long-side for now. (Although we continue to carry slightly higher levels of cash and hedges.)

However, that will change, and rapidly so, at the first sign of the “instability of stability.”

Unfortunately, by the time the Fed realizes what they have done, it has always been too late.