The higher stocks ride a glide path of zero volatility, the greater the risks for investors and their financial partners to fall victim to overconfidence. After all, we are human;  when it comes to money and emotions our brains are no smarter than a lizard’s.

As markets continue to be  hyper-fueled by unconventional monetary and fiscal policy in the form of tax cuts, it’s normal to suffer from chronic FOMO or Fear Of Missing Out. It feels like this charging bull is invincible.  You don’t hear much in mainstream financial media about corrections, bear markets, or recession, either. It’s at these times when things are going smoothly that I’m most suspicious. It doesn’t mean I’m going to take it out on a portfolio. Nor does it mean I’m bearish.  It does mean I’m going to aggressively seek out information that conflicts with the latest group think. In other words, at a time where there is apparently ‘no risk,’ and it’s deemed a Goldilocks period, I’m prepared to be eaten by a bear – emotionally, that is.

In addition, I’m greatly concerned that employers at big-box financial organizations  will fail to provide objective, historical information about market cycles especially as the decade-long bull market continues to validate the narrative that stocks ‘always go higher in the long run.’

I’m  worried that new professionals who never experienced a rough market or are too young to recall, cannot comprehend the fiscal damage a bear may inflict on retail households, especially those beginning their investment journey or close to retirement.  I’m convinced newly-minted brokers are not receiving the real story from the firms which employ them. Financial social media, especially Twitter (or FinTwit as the cool kids deem it),  for the most part is a dangerous information conduit as pros idolize financial celebrities who dissect time frames and use statistics that ignite confirmation bias.

I know that feeling. I fell hard for the hype on the brokerage side of the fence until 2006 when I took a deep dive into the catalysts of the Great Depression as purely by luck,  I began to notice how retail investors were progressively pulling money from their brokerage accounts and investing in real estate based on promises of big returns.  I knew that real estate busts, especially values of primary residences (thanks to the work of Robert Shiller),  had potential to create panic and wholesale societal and structural economic distress.

I read everything I could get my hands on including vintage volumes of Magazines Of Wall Street I purchased from the years 1925-1940; I studied Ben Bernanke’s, Christina D. Romer’s work.  The game changer for me was the book titled, “Only Yesterday – An Informal History of the 1920s,” by Frederick Lewis Allen.  A used copy may be purchased for less than 13 bucks on Amazon; the lessons within the pages remain invaluable.

Frederick Allen served on the editorial staff of Atlantic Monthly and editor-in-chief of Harper’s Magazine from 1941 until his death in 1954. What’s fascinating about this book besides the compelling, raw writing style, is Mr. Allen’s ability to showcase how the boom-to-bust affected everyday lives from the kitchen table, to music, to culture. The reader gains a feel of breaking bread with a family on any morning in 1929 and how the Great Depression overwhelmed people’s lives and the world around them. There is also a sordid accounting of what happened to real estate prices along with stock prices. If you seek to remain rational through periods of market euphoria, this book can assist.

As a professional responsible for growing and protecting a family’s wealth, it’s your job; no, it’s your highest aspiration, to avoid doing the following things:

1. Do not underestimate the effects of bear markets on the households you serve.

Almost 80% of rolling decades since 1900 have
delivered returns 20% above or below the
historical average. For the U.S. stock market, this
means that there is an 80% chance that total
nominal return for the next decade will be either
above 12% or below 8%. Ed Easterling, Crestmont Research, April 2019.

Bear markets in most charts appear as a minor speed bump on an otherwise smooth destination to larger portfolios.

Understand, to most investors it’s carnage. Average bear market losses can be devastating. Novices who do not comprehend the risks of stock investing, only rewards, have the potential to be blindsided, become distrustful and avoid stocks for a lifetime; pre-retirees or those who seek to begin a distribution plan within 3-5 years depend on their financial professionals to help them minimize losses significant enough to dramatically derail their plans.

Industry pundits and strategists tout that bear markets are rare. Those who fall for such a dangerous fallacy will eventually lose client trust and ostensibly, accounts. If you dare to believe market cycles are ‘no big deal,’ or every cycle is a bull – Prepare to suffer the consequences. 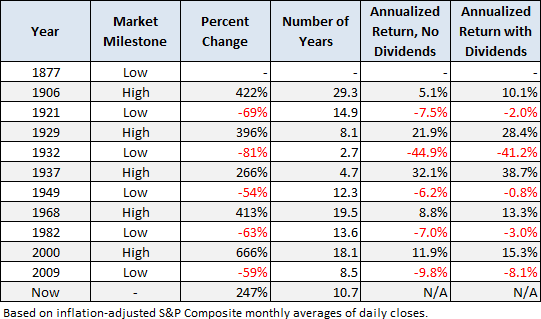 Based on history,  secular bears appear roughly 40% of the time, not 20%  which seems to be the popular, erroneous statistic touted by financial media. Most of the FinTwit universe tends to ignore the 120+ characters it takes to admit that bear markets actually do happen! (No, really, they do!).

On a percentage basis, bears indeed appear to be no big deal.

However, take a look on a point basis. This is the chart that will mean the most to clients.

On a point basis, bears almost (and in some cases, completely), wipe out the gains of the previous bull.

For me, the possible conversation with a client who experiences years of gains wiped out,  is the stuff that wakes me up at 1:30am with night sweats. Consider how much time in the span of a finite human life it takes to create wealth,  how quickly it can be lost, how long it will take to get back to even.  Now, you can repeatedly tout the line how ‘stocks always come back,’ but by then, the client will be done with you and either take over management of the account or find an advisor who appropriately answers the question – “what did you do to protect client wealth during the last bear market?”

I don’t provide this information to dissuade stock investing or suitable stock allocations. I provide it to keep advisors grounded at a time when most financial firms are going to hyper-spike the Kool-Aid to push corporate agendas without giving a d**** about personal growth or tenure of your career. As long as you communicate realistic information to help clients understand the potential bloodletting of bears, you’ll keep everybody’s emotions firmly in check and not mired in the clouds of euphoria.  You will forge trust that binds through any market cycle.

2. Avoid the crowded side of the boat or jump ship, altogether.

Never underestimate the seduction of emotional biases. Never discount the attraction to those who agree with your current point of view.

The objective isn’t to be a curmudgeonly contrarian or known as a wall flower at the bull market party, especially when global central banks keep turbo-spiking the punch bowl. Your overall responsibility is to be a an objective, holistic, eagle-eyed observer of the current period and study history to continue to safeguard the hard-earned savings of investors you serve.

In a paper for Investments & Wealth Institute – “The Psychology of Financial Professionals and Their Clients,” by H. Kent Baker PhD, CFA, CMA, Greg Filbeck, DBA, CFA, FRM, CAIA, CIPM, PRM and business professor/author Victor Riccardi, a behavioral specialist in his own right, outline the behavioral, cognitive and emotional biases financial professionals suffer; even more so than clients.

Overconfident professionals may underestimate the risks and overestimate the upside potential of their investment selections and the stock market, overall.  Even more so, I fear employers, along with mainstream financial media and the popular Fin kids, do nothing but inject steroids into the already bloated confirmation bias many of us are inflicted with, especially advisors who were running around the house in Underoos during the last bear cycle.

It’s worth it to deflate your emotional state, humble yourself a bit. During times of distress or euphoria, it’s crucial to aggressively seek out research that directly contradicts the popular  (or your), opinion. It’s a worthwhile exercise to equally document information that supports and throws a bit of headwind into your sails – Always keep an eye on the lifeboats. Clients will appreciate your objective, perhaps Stoic manner.

In the 70s, I recall a waste disposal space in Brooklyn. How in the spring, beautiful flowers would sprout among the mountains of garbage. Beautiful colors – yellow, purple, green. I never forgot what was underneath. Perspective…

Go ahead and fool yourself how it’s different this time.

You may believe that bear markets are a part of the past. Or the financial crisis was merely a blip in the heartbeat of time. I mean, it can’t happen again, correct? Many investors and households would disagree.

Overall, American household wealth has not fully recovered from the Great Recession. In 2016, the median wealth of all U.S. households was $97,300, up 16% from 2013 but well below median wealth before the recession began in late 2007 ($139,700 in 2016 dollars). And even though overall racial and ethnic inequality in wealth narrowed from 2013 to 2016, the gap remains large. Pew Research Center.

Become a humble provider of objective information, never waiver from a fiduciary intent, and be assured you’ll retain clients for decades.

I know that it’s worked for me.

It will for you, too.