Yes, You Should Be Concerned With Consumer Debt Just recently the Federal Reserve Bank of New York released its quarterly survey of the composition and balances of consumer debt. Importantly, it was the fact that total indebtedness reached a new all-time record that sent the mainstream media abuzz with questions about the economic implications. Here is the graphic that accompanied the commentary. One of the more interesting points made, in order to support the bullish narrative, was that record levels of debt is irrelevant because of the rise in disposable personal incomes. The following chart was given as evidence to support that claim.

Looks pretty good, as long as you don’t scratch too deeply. Let’s scratch a little. There are several problems with this analysis.

First, the calculation of disposable personal income, income less taxes, is largely a guess and very inaccurate due to the variability of income taxes paid by households.

Secondly, but most importantly, the measure is heavily skewed by the top 20% of income earners, needless to say, the top 5%. As shown in the chart below, those in the top 20% have seen substantially larger median wage growth versus the bottom 80%. Lastly, disposable incomes and discretionary incomes are two very different animals. Discretionary income is what is left of disposable incomes after you pay for all of the mandatory spending like rent, food, utilities, health care premiums, insurance, etc. According to a Gallup survey, it requires about $53,000 a year to maintain a family of four in the United States. For 80% of Americans, this is a problem even on a GROSS income basis.

This is why record levels of consumer debt is a problem. There is simply a limit to how much “debt” each household can carry even at historically low interest rates.

“Beginning 1983, the secular bull market of the 80-90’s began. Driven by falling rates of inflation, interest rates, and the deregulation of the banking industry, the debt-induced ramp up of the 90’s gained traction as consumers levered their way into a higher standard of living.” 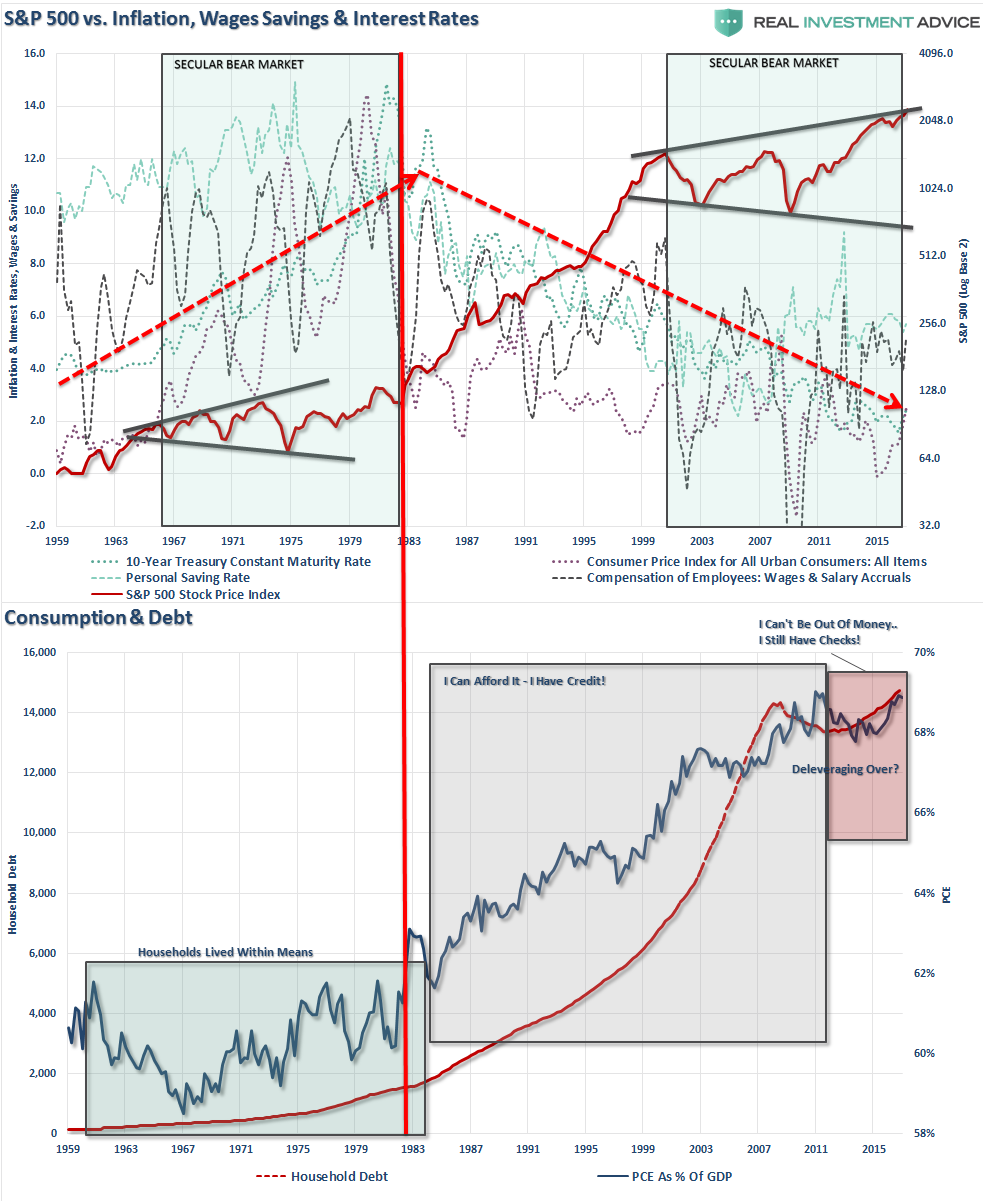 “While the Internet boom did cause an increase in productivity, it also had a very deleterious effect on the economy.

As shown in the chart above, the rise in personal debt was used to offset the declines in personal income and savings rates. This plunge into indebtedness supported the ‘consumption function’ of the economy. The ‘borrowing and spending like mad’ provided a false sense of economic prosperity.

During the boom market of the 1980’s and 90’s consumption, as a percentage of the economy, grew from roughly 61% to 68% currently. The increase in consumption was largely built upon a falling interest rate environment, lower borrowing costs, and relaxation of lending standards. (Think mortgage, auto, student and sub-prime loans.)

Since 2000, consumption as a percent of the economy has risen by just 2% over the last 17 years, however, that increase required more than a $6 Trillion in debt.

The importance of that statement should not be dismissed. It has required more debt to increase consumption by 2% of the economy since 2000 than it did to increase it by 6% from 1980-2000.

The problem is quite clear. With interest rates already at historic lows, consumers already heavily leveraged and economic growth running at sub-par rates – there is not likely a capability to increase consumption as a percent of the economy to levels that would replicate the economic growth rates of the past.“

This can be clearly seen in the following chart of personal consumption expenditures (PCE) and debt. Up until 2000, debt expansion and PCE rose in tandem. But beginning in 2000, as economic growth rates plunged to 2%ish, which isn’t strong enough to foster job growth beyond population growth, debt took the lead in supporting consumption. This was primarily centered on those in the bottom 80% who were simply trying to maintain their current standard of living. There is a vast difference between the level of indebtedness (per household) for those in the bottom 80% versus those in the top 20%. The problem is quite clear. With interest rates already at historic lows, the consumer already heavily leveraged and wage growth stagnant, the capability to increase consumption to foster higher rates of economic growth is limited.

Yes, the ongoing interventions by the Federal Reserve have certainly boosted asset prices higher, but that has only served to widen the wealth gap between the top 20% of individuals that have dollars invested in the financial markets and everyone else. What monetary interventions have failed to accomplish is an increase in production to foster higher levels of economic activity.

Corporate profitability is illusory also as it has primarily been a function of cost cutting, increased productivity, stock buybacks, and accounting gimmicks. While this has certainly provided an illusion of economic prosperity on the surface, however, the real economy remains very subject to actual economic activity. It is here that the inability to re-leverage balance sheets, to any great degree, to support consumption provides an inherent long-term headwind to economic prosperity.

With the average American still living well beyond their means, the reality is that economic growth will remain mired at lower levels as savings continue to be diverted from productive investment into debt service.  The issue, of course, is not just a central theme to the U.S. but to the global economy as well.  After eight years of excessive monetary interventions, global debt levels have yet to be resolved.

Debt acts as a “cancer” on an individual’s wealth as it siphons potential savings from income to service the debt. Rising levels of debt, means rising levels of debt service that reduces actual disposable personal incomes that could be saved or reinvested back into the economy.

The mirage of consumer wealth has been a function of surging debt levels. “Wealth” is not borrowed, but “saved,” and this is a lesson that too few individuals have learned.