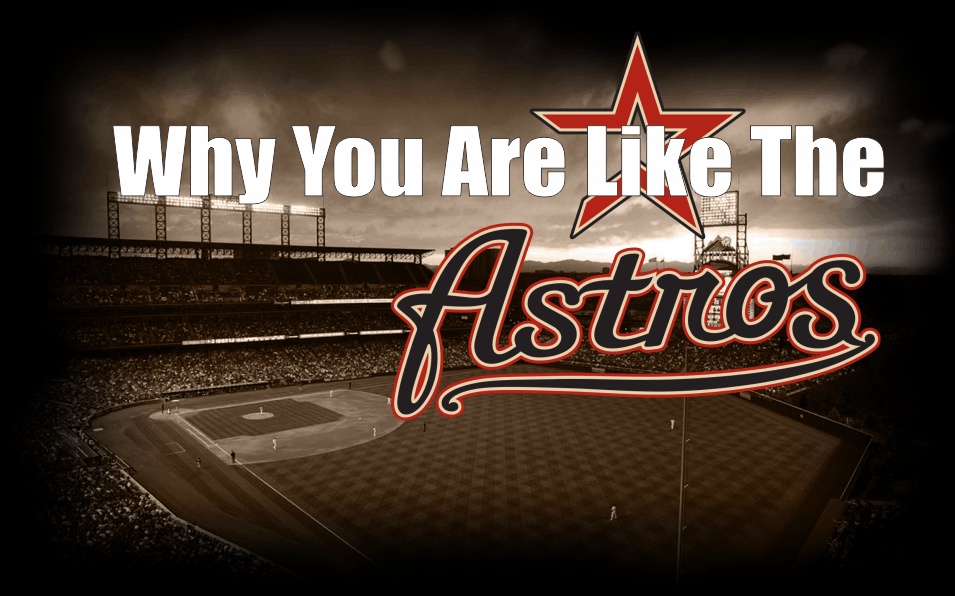 You’re the Astros, not the Dodgers, Yankees or Red Sox

The city of Houston is elated, tired and relieved today with the close of an epic World Series and our team coming out on top. This has been a long time coming, 56 years to be exact and it almost feels surreal. Houston is a tough city, not in the way of these streets are tough-though some are. More in a way that we’re resilient, diverse and have that never say never attitude. Yes, baseball is just a game, but this year it’s provided some much needed reprieve from daily life in a region devastated from Hurricane Harvey.

Look back a couple of years and this is a team that endured 3 consecutive 100 loss seasons. A starting over, if you will from being a once competitive staple in the National League Central Division. This organization has had to pick itself up from bouncing around on rock bottom. They could have easily tried to spend their way out of the hole or they could very strategically and patiently draft and develop talent little by little, year by year. This is a roster that until recently was void of any top earners and really the last bet Jeff Lunhow the Astros general manager made was one of risk/reward in Justin Verlander and boy did that pay off in ways only imaginable for the Astros fans. This team is now set up for years to come, by not taking the easy way out, by sticking to their plan and enduring the process knowing that these days will come. Is this a Dynasty? Only time will tell, but they are set up for the next several years with players under contract and a clubhouse that appears to love each other’s company.

The Dodgers, Yankee’s and Red Sox have the highest payrolls in baseball and have a collective 40 World Series Championships. In retrospect, they are your too big to fail banks. You and I we’re just mere mortals. Championships were bought and paid for long ago for times just like this week. They can afford to swing and miss because they’ll just step back up in the batter’s box with more money to offer and the promise of chasing a ring to superstar free agents. Most people, companies or teams don’t have that luxury.

In a lot of ways, we’re just like this Astros team, our financial wealth generally didn’t appear from thin air. Rather it was worked on, sacrifices and plans were made. There are times life throws us curve balls in the form of sickness, job loss, natural disaster, children, death or just unexpected expenses. This is when one must remember to stay the course, market returns help grow your money, but you and your good saving and spending habits will get you to your destination.  Risk management is now key, especially when you accumulate assets or when you reach your goal. For most, that goal is retirement. Find a Jeff Lunhow or in our case an advisor to help chart your course, you see you don’t have to be the Dodgers, Yankees or Red Sox to get the prize.

The road isn’t straight nor is it easy, but just like these Astros showed a little planning, nurturing, patience, sound defense and a double or home run every now and then can get you a long way.

Danny Ratliff, CFP®, ChFC® is the Senior Financial Advisor and Planner for Clarity Financial. He is also a contributing wrtier to the “Real Investment Advice” website. Feel free to EMAIL Danny with any questions or comments.
Customer Relationship Summary (Form CRS)
Post Views: 3,509