What Is The Great Medicare Mistake?

What is the Great Medicare Mistake? Let’s explore what it is and how to avoid it.

We are in the throes of Medicare open enrollment season. The political ads are gone (thankfully). However, Medicare Advantage commercials continue to inundate the airwaves and interrupt my Westerns.

As much as I love Joe Namath, he shouldn’t win out over Matt Dillon!

For all the television spots and direct mailers, most older Americans are resistant to review or compare coverage options because, frankly, the process is overwhelming and confusing.

Let’s face it; the exercise is as fulfilling as doing your own taxes. However, seniors must examine their Medicare Advantage (Part C) and Prescription Drug D coverages annually – even if they’re satisfied with their choices because one of the greatest Medicare mistakes is to be complacent about saving money!

The Senior Citizens League weighs in.

For example, an analysis by The Senior Citizens League, www. seniorsleague.org, of the twelve most frequently prescribed drugs discovered that Medicare recipients frequently overpay.

Although Medicare has an annual Open Enrollment period, when beneficiaries can compare drug plans and switch to lower costing drug plans, few retirees actually do so.

“In most areas of the country, the Medicare beneficiaries have more than two dozen Part D plans to sort through, and the average person just don’t know where to begin, or that free, unbiased help is available,” Johnson says.  “Consequently, Medicare beneficiaries winds up overpaying for prescriptions that could be obtained for a lower cost from a different drug plan.”

The difference in drug prices among the lowest and highest costing plans can range from hundreds to thousands of dollars. Drug plans with the highest premiums do not necessarily provide better coverage. Compare multiple plans which carry your prescriptions in their formulary.

If you’re eligible for Part D but do not take prescription drugs, it’s still important to shop for a Part D plan.  If not, you may owe a late enrollment penalty if, at any time after your Initial Enrollment Period, there’s a period of 63 or more days in a row when you don’t have Medicare drug or other creditable drug coverage. You’ll pay the penalty for as long as you have Medicare drug coverage (as long as you live?)

If you’re fortunate enough not to require prescription drugs, initially consider an inexpensive plan to avoid the penalty. From there, look to change coverage during the annual enrollment period if your drug status changes.

Yes, the message for Medicare recipients is to set aside time to investigate. Recipients who spend about an hour every enrollment period find they save money, discover additional benefits, and overall are more sensitive to adverse changes to current plan benefits.

Do you participate in Original Medicare, Medicare Advantage, or a prescription drug Part D plan? Then mark your calendar every year to review or change coverage.

As we enter the final weeks of 2020 enrollment, I want to share some interesting and salient information from several sources, including Christian Worstell – a licensed insurance agent and writer for www.medicareadvantage.com, a non-government insurance website owned by TRANZACT.

Per Medicare.com, seniors have withdrawn an estimated $22 billion from investments to pay for healthcare. One can only imagine the future of medical costs as the lingering effects of Covid affect older Americans long term.

The Likelihood to Comparison Shop.

Who Do Seniors Consult For Medicare Insurance Advice?

Unfortunately, financial advisors don’t make the cut. However, we pride ourselves at RIA how clients, blog readers, and radio listeners indeed reach out to us for Medicare guidance.

Older Americans initially seek out the advice of friends and then medical professionals. They also largely trust the government for Medicare information. Four out of five seniors have utilized the Medicare Plan Finder tool on Medicare.gov.

A Few Things To Remember When Shopping for Medicare Plans.

Don’t be seduced by ads or direct mailers. I admit the advertisements are very tempting. They make every plan appear perfect, most inexpensive, and for some, cool gifts are part of the pitch. Medicare Advantage plans are lucrative ventures for most insurance companies and an area of explosive growth. On the surface, they appear less expensive and offer more than Medigap supplemental coverage.

The Meteoric Rise of Medicare Advantage.

With retiree cash flows under duress due to the lingering effects of COVID on future healthcare costs, Medicare Part B inflation, and consistently poor COLA adjustments for Social Security, I expect Medicare Advantage plans to continue their meteoric pace of growth.

Enrollment in Medicare Advantage programs has doubled over the last decade, which will spur increased competition, which is great, but it’s also going to make your review process increasingly arduous.

Let the advertisements signal you to do homework. Consider all the direct mailers an ‘Annual Medicare Enrollment Awakening.‘ The alert to set a couple of hours aside for review each year.

Zero premium plans are popular but dig deeper. Per KFF.org, nearly two-thirds of Medicare Advantage enrollees pay no premiums except, of course, their Part B premiums. 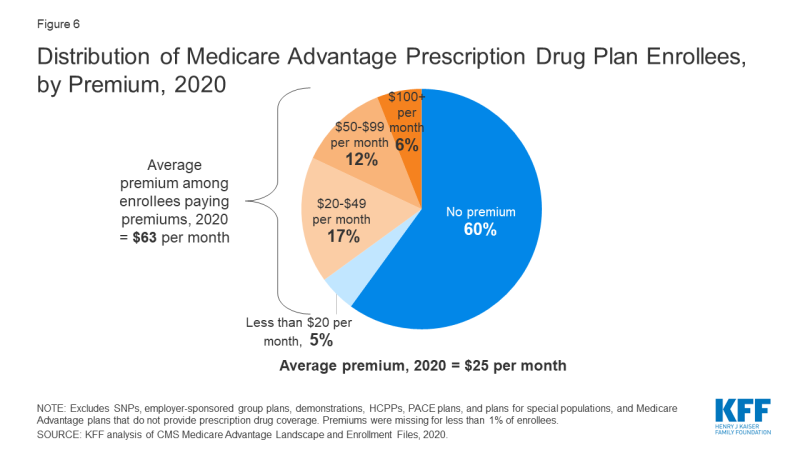 Remember, zero-premium is a single factor. Medicare Advantage plans have deductibles and co-pays that must be assessed holistically depending on your overall state of health and the estimated frequency of doctor visits and diagnostics.

Out Of Network Costs

Be prepared to pay more out-of-pocket if out of network. Generally, Medicare Advantage plans prefer you stick with their respective HMO or PPO networks. If your current doctor, hospital, physician specialist is out of network, understand the ramifications, especially if you travel out of state often and find yourself in need of health coverage. 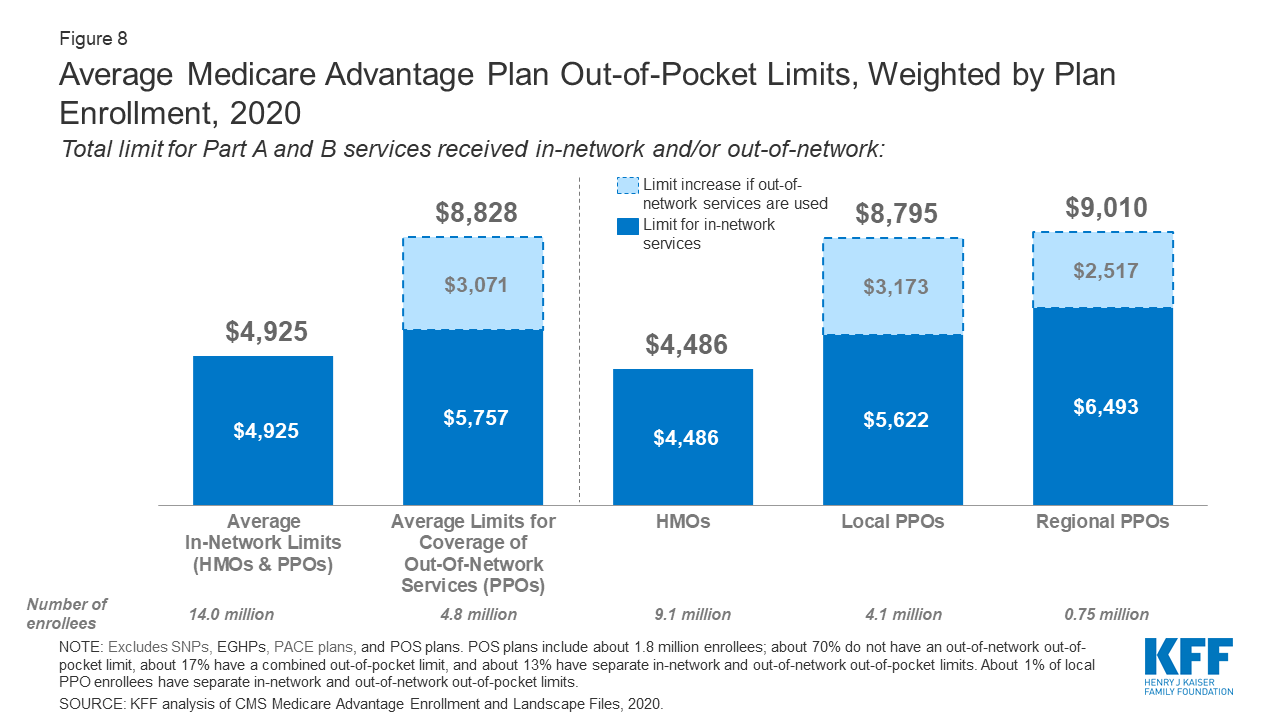 Is there a chance you may be in the hospital for longer than five days? Interesting analysis by KFF:

At RIA, we believe Medicare Advantage plans are best for the healthiest households who aren’t in the hospital often or visit the doctor frequently. As a reminder, I’ve listed the differences between Advantage and Medigap below.

Medicare Advantage Plans are inclusive, which means they cover all services of Original Medicare, including prescription drugs. Most offer extra coverage like vision, hearing, dental, and/or wellness plans. Two-thirds of the plans offered are through closed-physician network HMOs.

Advantage Plans usually have lower premiums than Medigap (also known as Medicare Supplemental Insurance) and are offered without insurability evidence.

Per KFF.org: While average Medicare Advantage premiums paid by MA-PD enrollees have been relatively stable for the past several years ($36 per month in 2017), enrollees may be liable for more of Medicare’s costs, with average out-of-pocket limits increasing 21 percent and average Part D drug deductibles increasing more than 9-fold since 2011; however, there was little change in out-of-pocket limits and Part D drug deductibles from 2016 to 2017.

At RIA, we suggest older Americans select a Medigap policy over Medicare Advantage, but our views may change in the future. Monthly premiums for Medigap policies will absolutely be higher. However, the Medigap insured can benefit from more choice among providers and ultimately lower total out-of-pocket costs.

Please let us know if our team can help you make sense of what’s available.