The Coming Collision Of Debt & Rates On Tuesday, I discussed the issue of what has historically happened to the financial markets when both the dollar and rates are rising simultaneously. To wit:

“With the 10-year treasury rate now extremely overbought on a monthly basis, combined with a stronger dollar, the impact historically has not been kind to stock market investors. While it doesn’t mean the market will “crash” today, or even next week, historically rising interest rates combined with a rising dollar has previously led to unexpected and unintended consequences previously.” I wanted to reiterate this point after reading a recent comment from Jamie Dimon, CEO of JP Morgan, whom, as I have previously written about, makes rather “disconnected” statements from time to time.

“We’re probably in the sixth inning (of this economic cycle), and it’s very possible you’re going to see stronger growth in the U.S. I’ve heard people say, well, it’s looking like 2007. Completely untrue. There’s much less leverage in the system. The banks are much better capitalized.”

First, while he talks about banks being much better capitalized, the interesting question is:

“If banks are so well capitalized, why hasn’t FASB Rule 157 been reinstated?”

As I noted previously, FASB Rule 157 was repealed during the financial crisis to allow banks to mark bad assets to “face value” making balance sheets stronger than they appear. This served the purpose of reducing panic in the system, supported “Too Big To Fail” banks, and kept many banks in operation. But if banks are once again so well capitalized, leverage reduced and the economy firing on all cylinders – why is that repeal still in place today? And, if the financial system and economic environment are so strong, then why are Central Banks globally still utilizing “emergency measures” to support their economies?

Likely it is because economic growth remains tepid and banks are once again heavily leveraged as noted by Zero Hedge:

“It is by now well known that consolidated leverage in the system is at an all-time high, with both the IMF and the IIF calculating in April that total global debt has hit a new all-time high of $237 trillion, up $70 trillion in the past decade, and equivalent to a record 382% of developed and 210% of emerging market GDP.” However, let me address the leverage issue from an economic standpoint. Rising interest rates are a “tax.” When combined with a stronger dollar, which negatively impacts exporters (exports make up roughly 40% of total corporate profits), the catalysts are in place for a problem to emerge.

The chart below compares total non-financial corporate debt to GDP to the 2-year annual rate of change for the 10-year Treasury. As you can see sharply increasing rates have typically preceded either market or economic events. Of course, it is during those events which loan default rates rise, and leverage is reduced, generally not in the most “market-friendly” way. This leverage issue is more clearly revealed when we look at non-financial corporate debt and assets as a percentage of the gross-value added (GVA). Again, as above, rising rates have historically sparked a rapid reversion in this ratio which has generally coincided with the onset of a recession. With leverage, both corporate and household, at historical peaks, the only question is how long can consumers continue to absorb higher rates?

4) One of the main arguments of stock bulls over the last 5-years has been the “stocks are cheap based on low interest rates.”

6) As rates increase so does the variable rate interest payments on credit cards and home equity lines of credit. With the consumer being impacted by stagnant wages and increased taxes, higher credit payments will lead to a contraction in disposable income and rising defaults.

8) Many corporate share buyback plans and dividend payments have been done through the use of cheap debt, which has led to increased corporate balance sheet leverage.

10) The deficit/GDP ratio will rise as borrowing costs rise.

You get the idea. Interest rates, economic growth, and credit are extremely linked. When it comes to the stock market, the claim that higher rates won’t impact stock prices falls into the category of “timing is everything.” 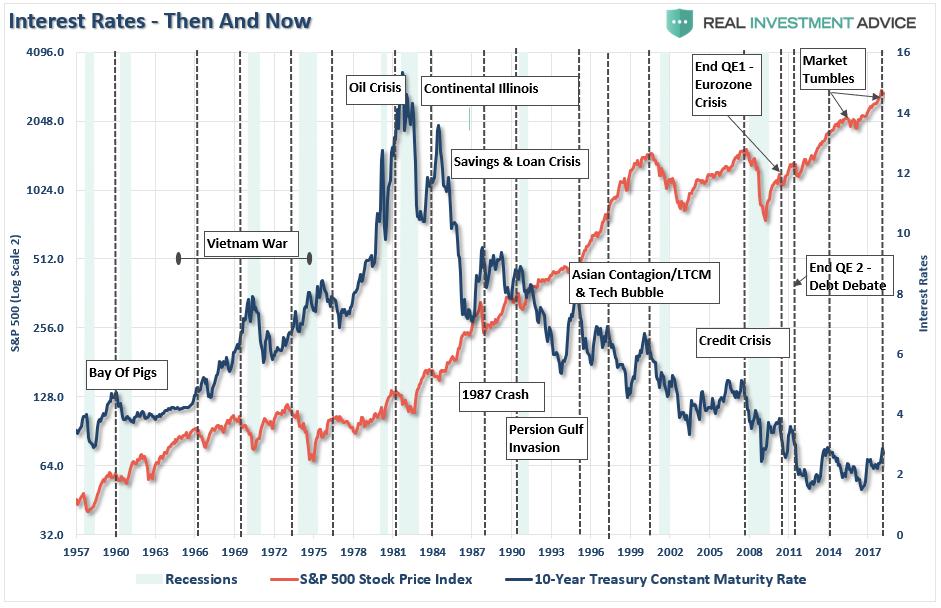 If we go back to the first chart above, what is clear is that sharp increase in interest rates, particularly on a heavily levered economy, have repeatedly led to negative outcomes. With rates now at extensions only seen in 7-periods previously, there is little room left for further acceleration in rates before such an outcome spawns.

“Markets are already vulnerable, as the Fed is pulling back liquidity and raising rates, making cash scarcer and more attractive – reversing the easy liquidity and 0% cash rate that helped push money out of the risk curve over the course of the expansion. The danger to assets from the shift in liquidity and the building late-cycle dynamics is compounded by the fact that financial assets are pricing in a Goldilocks scenario of sustained strength, with little chance of either a slump or an overheating as the Fed continues its tightening cycle over the next year and a half.”

Here are the things that you need to know:

1) There have been ZERO times when the Federal Reserve has embarked upon a rate hiking campaign that did not eventually lead to negative economic and financial market consequences.

2) The median number of months following the initial rate hike has been 17-months. However, given the confluence of central bank interventions, that time frame could extend to the 35-month median or late-2018 or early-2019.

3) The average and median increases in the 10-year rate before negative consequences have occurred has historically been 43%. We are currently at double that level.

4) Importantly, there have been only two times in recent history that the Federal Reserve has increased interest rates from such a low level of annualized economic growth. Both periods ended in recessions.

5) The ENTIRETY of the“bullish” analysis is based on a sustained 34-year period of falling interest rates, inflation and annualized rates of economic growth. With all of these variables near historic lows, we can only really guess at how asset prices, and economic growth, will fair going forward.

6) Rising rates, and valuations, are indeed bullish for stocks when they START rising. Investing at the end of rising cycle has negative outcomes.

What is clear from the analysis is that bad things have tended to follow sustained increases in interest rates. As the Fed continues to press forward hiking rates into the current economic cycle, the risk of a credit related event continues to rise.

For all the reasons currently prognosticated that rising rates won’t affect the “bull market,” such is the equivalent of suggesting “this time is different.”

Importantly, “This Cycle Will End,”  and investors who have failed to learn the lessons of history will once again pay the price for hubris.