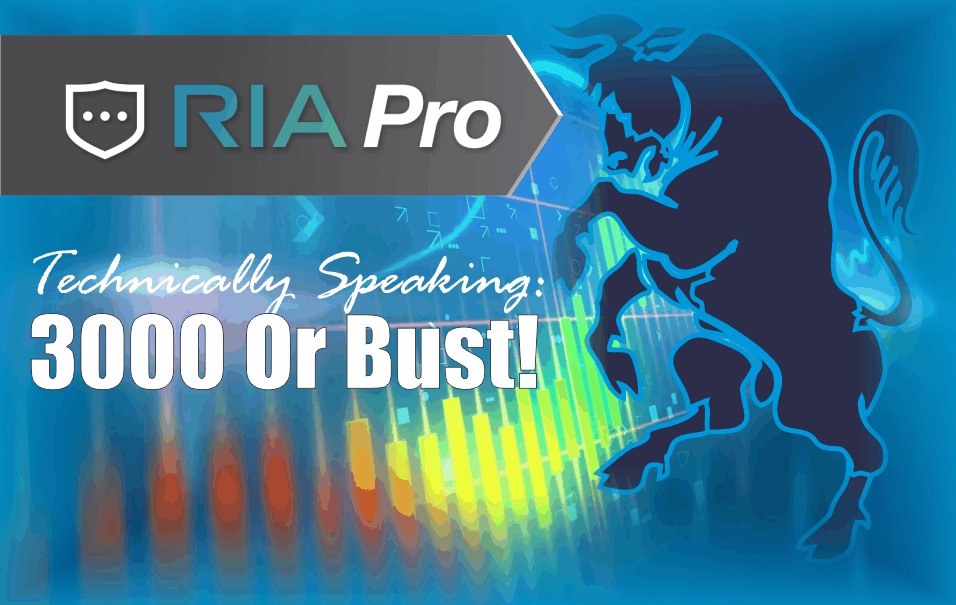 A couple of weeks ago, I discussed the recent breakout to “all-time” highs and the potential run to 3000 for the S&P 500 index.

“Regardless of the reasons, the breakout Friday, with the follow through on Monday, is indeed bullish. As we stated repeatedly going back to April, each time the market broke through levels of overhead resistance we increased equity exposure in our portfolios. The breakout above the January highs now puts 3000 squarely into focus for traders.

This idea of a push to 3000 is also confirmed by the recent ‘buy signal’ triggered in June where we begin increasing equity exposure and removing all hedges from portfolios. The yellow shaded area is from the beginning of the daily ‘buy signal’ to the next ‘sell signal.'” Importantly, at that time I specifically noted:

“However, with the markets VERY overbought on a short-term basis, we are looking for a pullback to the previous ‘breakout’ levels, or a consolidation of the recent gains, to increase equity exposure further.” The only short-term concern is the warning signal in the lower panel. Just like in early August, when a warning was issued, it never matured into a deeper correction. While I am not dismissing the current warning, given Monday’s bounce off of support combined with a very short-term oversold condition, and very high levels of bullish “optimism,” the most likely outcome currently remains a push towards 3000 through the rest of this year. This high level of “optimism” is shown in the chart below which compares the S&P 500 to investors in bearish funds, money markets, and bullish funds. (Investors are “all in.”) Remember, in the very “short-term,” it is all about “psychology.”

In the long-term, it is all about “fundamentals.”

Over the next several weeks to the next couple of months, the “bullish bias” is clearly in control. Several weeks ago we upgraded our portfolio allocations back to 100% of model weights as the weekly “buy signal” suggested a return to a more bullish backdrop for investors. As we have repeatedly noted in our weekly missives, while we remain concerned about the longer-term prospects for the markets due to valuations, late-stage economic dynamics, and normalized profit cycles, our portfolios remain nearly fully allocated in the short-term.

With the recent pullback to support, which confirms the recent breakout above the January highs, we are adding some additional exposure this week.

In the Equity and Equity/ETF Blend Portfolios we are taking the following actions:

In the ETF Portfolio:

In case you missed our weekend missive, this doesn’t mean we are just ignoring all risk and neglecting our portfolio management process. As I stated:

“It is worth remembering that portfolios, like a garden, must be carefully tended to otherwise the bounty will be reclaimed by nature itself.

3) FERTILIZE AND WATER: Add savings on a regular basis. A garden cannot grow if the soil is depleted of nutrients or lost to erosion. Likewise, a portfolio cannot grow if capital is not contributed regularly to replace capital lost due to erosion and loss. If you think you will NEVER LOSE money investing in the markets…then shouldn’t be investing to begin with.

4) WATCH THE WEATHER: Pay attention to markets. A garden can quickly be destroyed by a winter freeze or drought. Not paying attention to the major market trends can have devastating effects on your portfolio if you fail to see the turn for the worse. As with a garden, it has never been harmful to put protections in place for expected bad weather that didn’t occur. Likewise, a portfolio protected against ‘risk’ in the short-term, never harmed investors in the long-term.

With the overall market trend still bullish, there is little reason to become overly defensive in the very short-term. However, there are plenty of warning signs the ‘good times’ are nearing their end, which will likely surprise most everyone.”

Again, we are moving cautiously. With the trend of the market positive, we realize short-term performance is just as important as long-term. It is always a challenge to marry both.

The Fly In The Ointment

The one thing that continues to weigh on us is the deviation in international performance relative to the U.S. As discussed this past weekend:

“Emerging and International Markets were removed in January from portfolios on the basis that ‘trade wars’ and ‘rising rates’ were not good for these groups. With the addition of the ‘Turkey Crisis,’ ongoing tariffs, and trade wars, there is simply no reason to add ‘drag’ to a portfolio currently. These two markets are likely to get much worse before they get better. Put stops on all positions.

The recent bounce again failed at the declining 50-dma. Positions should have been sold on that failed rally. Stops at the recent lows were triggered on Friday and suggests positions be closed out as lower levels are likely at this time.” With emerging markets diverged from domestic markets, it suggests economic growth may not be as robust as many believe. While a 2-quarter divergence certainly isn’t suggesting a ‘financial crisis’ is upon us, it does suggest that something isn’t quite right with the global economic backdrop.

This underperformance in international markets combined with a bond market which continues to “NOT buy” the rally in stocks also keeps us on guard. Such suggests capital continues to seek “safety” over “risk” in the short term. More importantly, the 10-year Treasury rate has a strong history of warning of dangers in the market over the longer-term time frame. While bullish sentiment very much controls the short-term trend and direction of the market, in which we must participate, the longer-term dynamics still remain clearly bearish.

Peak earnings, employment, economic and profits growth all suggest the next leg of the market will likely be lower rather than higher.

But that is an article, and portfolio management and allocation change, which is yet to be written.