Socialism Rises Due To The Great American Economic Growth Myth

There is little denying the rise of “socialistic” ideas in the U.S. today. You can try and cover the stench by calling it “social democracy” but in the end, it’s still socialism.

Since 1775, millions of Americans have given their lives in defense of the American “idea.” The tyranny and oppression which arise from communism, socialism, and dictatorships have been a threat worthy of such sacrifice. I am sure those patriots who died to ensure the “American way of life” would be disheartened by the willingness of the up and coming generations adopt such ideals.

But such shouldn’t be a surprise. It is the cycle of all economic civilizations over time as we “forget our history” and become doomed to repeat. it.

“A democracy is always temporary in nature; it simply cannot exist as a permanent form of government. A democracy will continue to exist up until the time that voters discover they can vote themselves generous gifts from the public treasury. From that moment on, the majority always votes for the candidates who promise the most benefits from the public treasury, with the result that every democracy will finally collapse due to loose fiscal policy, which is always followed by a dictatorship. 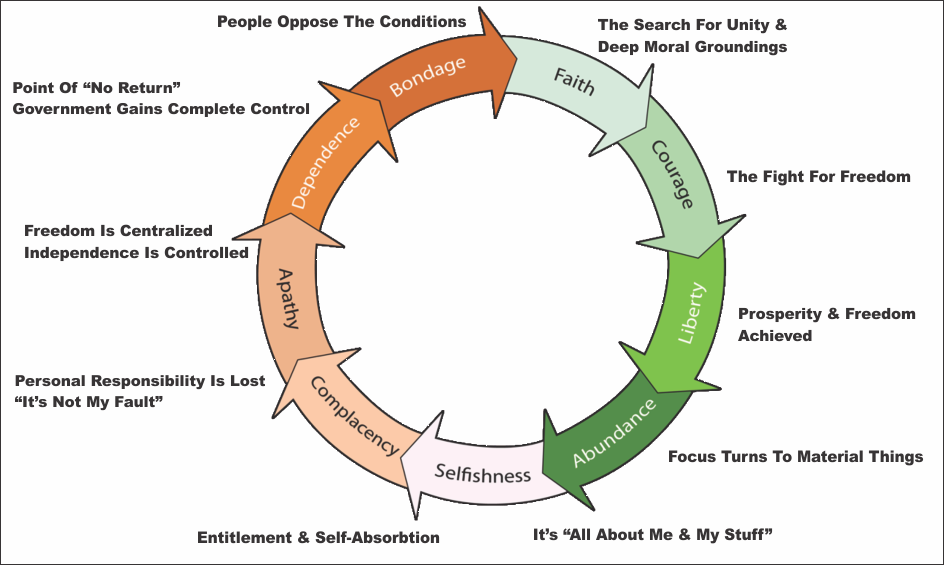 Since Tytler’s time, we’ve been able to witness many formerly free countries slide inexorably into their final stages of decline. For example, the countries in the EU are further gone than the countries in North America, and Venezuela is, well, just gone.

Currently, it is fairly evident that the U.S. has moved from complacency to apathy, given the lack of will by any political party to tackle the debts, deficits, and underfunded pension system. Then there are the calls for more government support in everything from absolving student loan debt to government guaranteed employment. As we discussed recently in “MMT – Sounds Great In Theory:”

“While MMT sounds great at the conversational level, so does ‘communism’ and ‘socialism.’ In practice, the outcomes have been vastly different from the theory. The real crisis lies between the choices of ‘austerity’ and continued government ‘largesse.’ One choice leads to long-term economic prosperity for all, the other doesn’t.”

But, here we are, almost 243 years after the United States was founded, and only 36 percent of Americans are satisfied with the current state of the country, according to a recent Gallup poll. Of the 61 percent that are unsatisfied, many believe the social, economic, and cultural issues plaguing the country will lead to its downfall.

The reasoning can be clearly seen in study after study of the finances of American households.

In addition, Americans have an average of $6,506 in credit card debt, according to a separate report out this week by the Experian credit agency. Just 49 percent of Americans say their job income alone is enough to pay the bills.”

We have discussed this problem previously:

“Assuming a ‘family of four’ needs an income of $58,000 a year to just ‘make it,’ such becomes problematic for the bottom 80% of the population whose wage growth falls far short of what is required to support the standard of living, much less to obtain ‘happiness.’

The ‘gap’ between the ‘standard of living’ and real disposable incomes is more clearly shown below. Beginning in 1990, incomes alone were no longer able to meet the standard of living, so consumers turned to debt to fill the ‘gap.’ However, following the ‘financial crisis,’ even the combined levels of income and debt no longer fill the gap. Currently, there is almost a $3200 annual deficit that cannot be filled.”

Changes like these don’t happen in a vacuum. It is the result of years of a burgeoning divide between the wealthy and everyone else. It is also a function of a 40-year process of capitalism morphing an entire population into “debt slaves” to sustain economic prosperity.

It is a myth that the economy has grown by roughly 5% since 1980. In reality, economic growth rates have been on a steady decline over the past 40 years, which has been supported by a massive push into deficit spending by consumers. Look closely at the chart above. From 1950-1980 the economy grew at an annualized rate of 7.70%. This was accomplished with a total credit market debt to GDP ratio of less 150%. The CRITICAL factor to note is that economic growth was trending higher during this span rising from roughly 5% to a peak of nearly 15%. There were a couple of reasons for this. First, lower levels of debt allowed for personal savings to remain robust which fueled productive investment in the economy. Secondly, the economy was focused primarily in production and manufacturing which has a high multiplier effect on the economy.  This feat of growth also occurred in the face of steadily rising interest rates which peaked with economic expansion in 1980.

As we have discussed previously in “The Breaking Point,” beginning in 1980 the shift of the economic makeup from a manufacturing and production based economy to a service and finance economy, where there is a low economic multiplier effect, is partially responsible for this transformation. The decline in economic output was further exacerbated by increased productivity through technological advances, which while advancing our society, plagued the economy with steadily decreasing wages.  Unlike the steadily growing economic environment prior to 1980; the post-1980 economy has experienced by a steady decline. Therefore, a statement that the economy has been growing at 5% since 1980 is grossly misleading. The trend of economic growth, wages, and productivity (5-year averages) show the real problem. This decline in economic growth has kept the average American struggling to maintain their standard of living. It is from that perspective the rise of socialistic ideas should be of no surprise. As wages declined, families were forced to turn to credit to fill the gap in maintaining their current standard of living. This demand for credit became the new breeding ground for the financed based economy. Easier credit terms, lower interest rates, loose lending standards and less regulation fueled the continued consumption boom. While America on the surface was the envy of the world for its apparent success and prosperity; the underlying cancer of debt expansion and lower personal savings was eating away at its core.

What would the economic growth rate be WITHOUT the debt. Instead of $18 Trillion (inflation-adjusted) it would be a negative $50 Trillion. This chart shows why “socialism” is now “a thing.”

The massive indulgence in debt, what the Austrians refer to as a “credit induced boom”, has now reached its inevitable conclusion. The unsustainable credit-sourced boom, which leads to artificially stimulated borrowing, seeks out diminishing investment opportunities. Ultimately these diminished investment opportunities lead to widespread malinvestments. Not surprisingly, we clearly saw it play out “real-time” in everything from subprime mortgages to derivative instruments which was only for the purpose of milking the system of every potential penny regardless of the apparent underlying risk. When credit creation can no longer be sustained the markets must began to clear the excesses before the cycle can begin again.  It is only then, and must be allowed to happen, can resources be reallocated back towards more efficient uses.  This is why all the efforts of Keynesian policies to stimulate growth in the economy have ultimately failed. Those fiscal and monetary policies, from TARP and QE to tax cuts, only delay the clearing process. Ultimately, that delay only potentially worsens the inevitable clearing process.

The clearing process is going to be very substantial. The economy is currently requiring roughly $3 of total credit market debt to create $1 of economic growth. A reversion to a structurally manageable level of debt would involve a nearly $30 trillion reduction of total credit market debt. The economic drag from such a reduction will be dramatic while the clearing process occurs. This is one of the primary reasons why economic growth will continue to run at lower levels going into the future. We will witness an economy plagued by more frequent recessionary spats, lower equity market returns, and a stagflationary environment as wages remain suppressed while costs of living rise. However, only by clearing the excess can the personal savings return to levels which can promote productive investment, production, and ultimately consumption.

Does this mean that all is doomed? Of course, not. However, we will likely remain constrained in the current cycle of “spurt and sputter” growth cycle we have witnessed since 2009. Such will be marked by continued volatile equity market returns, and a stagflationary environment, as wages remain suppressed while costs of living rise.

If I am wrong, then a rising percentage of Americans wouldn’t be supporting the idea of “socialism?”