The 5-Mental Traps Investors Are Falling Into Right Now

I recently wrote about the “F.I.R.E.” movement and how it is a byproduct of late-stage bull market cycle. It isn’t just the “can’t lose” ideas which are symptomatic of bullish cycles, but also the actual activities of investors as well. Not surprisingly, the deviation of growth over value has become one of the largest in history.

This divergence of the “performance chase” should be a reminder of Benjamin Graham’s immortal warning:

“The investor’s chief problem, and even his worst enemy, is likely to be himself.”

With valuations elevated, prices at record highs, and the current bull market the longest in U.S. history, it seems like a good time to review the 5-most dangerous psychological biases of investing.

The 5-Most Dangerous Biases

Every year Dalbar releases their annual “Quantitative Analysis of Investor Behavior” study which continues to show just how poorly investors perform relative to market benchmarks over time. More importantly, they discuss many of the reasons for that underperformance which are all directly attributable to your brain.

“In 2018 the average investor underperformed the S&P 500 in both good times and bad, lagging behind the S&P by more than 100 basis points in two different months.” Cognitive biases are a curse to portfolio management as they impair our ability to remain emotionally disconnected from our money. As history all too clearly shows, investors always do the “opposite” of what they should when it comes to investing their own money.

Here are the top-5 of the most insidious biases investors are falling into RIGHT NOW!

As individuals, we tend to seek out information that conforms to our current beliefs. If one believes that the stock market is going to rise, they tend only to seek out news and information that supports that position. This confirmation bias is a primary driver of the psychological investing cycle of individuals as shown below. I discussed this just recently in why “Media Headlines Will Lead You To Ruin.” 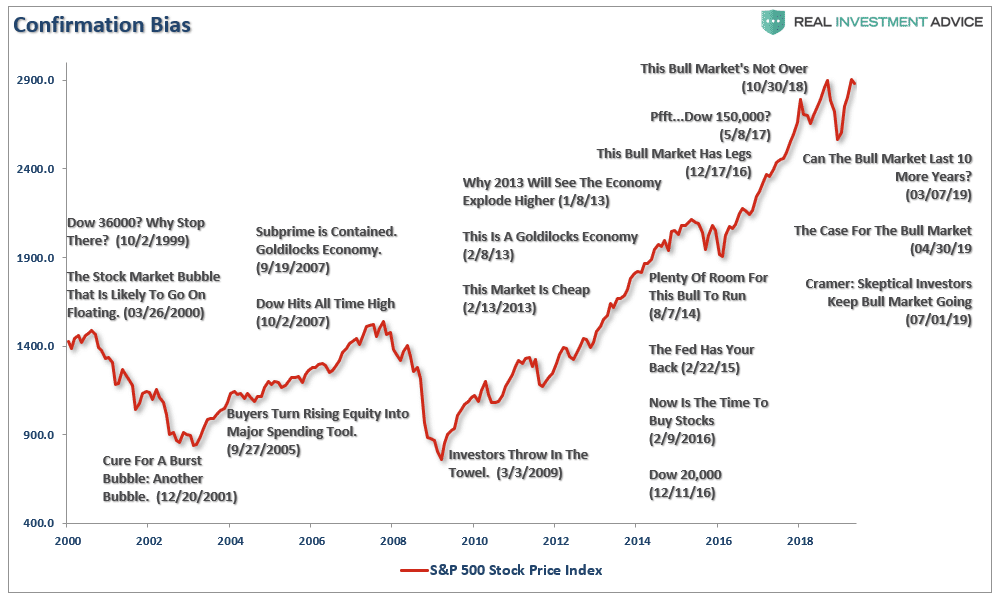 As individuals, we want “affirmation” our current thought processes are correct. As human beings, we hate to be told we are wrong, so we tend to seek out sources which tell us we are “right.”

Currently, individual investors are “fully” back in the market despite a fairly decent bruising in 2018. Historically, this has not turned out well for individuals, but given that “optimism sells,” it is not surprising to see the majority of the mainstream meeting touting a continuation of the bull market.

The “Gambler’s Fallacy” is one of the bigger issues faced by individuals when investing. As emotionally driven human beings, we tend to put a tremendous amount of weight on previous events believing that future outcomes will somehow be the same.

The bias is clearly addressed at the bottom of every piece of financial literature.

“Past performance is no guarantee of future results.”

However, despite that statement being plastered everywhere in the financial universe, individuals consistently dismiss the warning and focus on past returns expecting similar results in the future.

This is one of the key issues that affect an investor’s long-term returns. Performance chasing has a high propensity to fail, continually causing investors to jump from one late cycle strategy to the next. This is shown in the periodic table of returns below. “Hot hands” only tend to last on average 2-3 years before going “cold.” I traced out the returns of large capitalization stocks (S&P 500) and U.S. Fixed Income (Barclay’s Aggregate Bond Index) for illustrative purposes. Importantly, you should notice that whatever is at the top of the list in some years tends to fall to the bottom in subsequent years. “Performance chasing” is a major detraction from investor’s long-term investment returns.

So, what’s hot in 2019, we detail this each week for our RIAPRO subscribers (30-day FREE TRIAL) Currently, money is chasing Technology, Discretionary, and Communications, with Energy, Healthcare, and Bonds lagging. From a contrarian viewpoint, with “Value” dramatically underperforming “Growth” at this juncture of the investment cycle, there may be a generational opportunity soon approaching.

When it comes to “risk-taking” there are two ways to assess the potential outcome. There are “possibilities” and “probabilities.” As individuals, we tend to lean toward what is possible such as playing the “lottery.”

The statistical probabilities of winning the lottery are astronomical. In fact, you are more likely to die on the way to purchase the ticket than actually winning the lottery. However, it is the “possibility” of instant wealth that makes the lottery such a successful “tax on poor people.”

As humans, we tend to neglect the “probabilities,” or rather the statistical measures of “risk,” undertaken with any given investment, in exchange for the “possibility” of gaining wealth. Our bias is to “chase” stocks, or markets, which already have large gains as it is “possible” they could move higher. However, the “probability” is that a corrective action will likely occur first.

With markets currently well deviated above long-term historical means, and valuations elevated, the possibility is greatly outweighed by the probability of a mean-reverting event first.  The following chart is derived from Dr. Robert Shiller’s inflation-adjusted price data and is plotted on a QUARTERLY basis. From that quarterly data is calculated: Over the next several weeks, or even months, the markets could certainly extend the current deviations from long-term mean even further drive by the psychology of the “herd.” But such is the nature of every bull market peak, and bubble, throughout history as the seeming impervious advance lures the last of the stock market “holdouts” back into the markets.

Probability neglect is another major component to why investors consistently “buy high and sell low.”

Though we are often unconscious of the action, humans tend to “go with the crowd.” Much of this behavior relates back to “confirmation” of our decisions, but also the need for acceptance. The thought process is rooted in the belief that if “everyone else” is doing something, then if I want to be accepted, I need to do it too.

“If all your friends jump off a cliff, are you going to do it too?” – said by every Mother in history.

In life, “conforming” to the norm is socially accepted and in many ways expected. However, in the financial markets the “herding” behavior is what drives market excesses during advances and declines.

As noted above, the “momentum chase” currently is good example of “herding” behavior. As Michael Lebowitz noted recently:

“The graph below charts ten year annualized total returns (dividends included) for value stocks versus growth stocks. The most recent data indicates value stocks have underperformed growth stocks by 2.86% on average in each of the last ten years.”

“There have only been eight ten-year periods over the last 90 years (total of 90 ten-year periods) when value stocks underperformed growth stocks. Two of these occurred during the Great Depression and one spanned the 1990s leading into the Tech bust of 2001. The other five are recent, representing the years 2014 through 2018.

When the cycle turns, we have little doubt the value-growth relationship will revert. In such a case value would outperform growth by nearly 30% in just two years. Anything beyond the average would increase the outperformance even more.”

Moving against the “herd” is where investors have generated the most profits over the long term. The difficulty for most individuals, unfortunately, is knowing when to “bet” against the stampede.

Recency bias occurs when people more prominently recall, and extrapolate, recent events and believe that the same will continue indefinitely into the future. This phenomenon frequently occurs in with investing. Humans have short memories in general, but memories are especially short when it comes to investing cycles.

As Morningstar once penned:

“During a bull market, people tend to forget about bear markets. As far as human recent memory is concerned, the market should keep going up since it has been going up recently. Investors therefore keep buying stocks, feeling good about their prospects. Investors thereby increase risk taking and may not think about diversification or portfolio management prudence. Then a bear market hits, and rather than be prepared for it with shock absorbers in their portfolios, investors instead suffer a massive drop in their net worths and may sell out of stocks when the market is low. Selling low is, of course, not a good long-term investing strategy.”

This bias in action looks a lot like the chart below. During bull markets, investors believe that markets can only go up – so “buy the dip” becomes a “can’t lose” investment strategy.  This bias also works in reverse during bear markets. Investors become convinced the market will only go lower which eventually leads them to “panic selling” the lows.

Recency bias is the primary driver behind the “Buy High/Sell Low” syndrome.

The last point brings me to something Michael Sincere once penned:

Michael’s point is very apropos, particularly today, it’s currently “high-fives and pats on the back.”

The market’s ability to seemingly recover from every setback, and to ignore fundamental issues, has led investors to feel “bulletproof” as investment success breeds overconfidence.

The reality is that strongly rising asset prices, particularly when driven by emotional exuberance, “hides” investment mistakes in the short term. Poor, or deteriorating, fundamentals, excessive valuations, and/or rising credit risk is often ignored as prices increase. Unfortunately, it is only after the damage is done the realization of those “risks” occurs.

For investors, it is crucially important to understand that markets run in full cycles (up and down). While the bullish “up” cycle lasts twice as long as the bearish “down” cycle, the majority of the previous gains are repeatedly destroyed. The damage to investors is not a result of lagging markets as they rise, but in capturing the inevitable reversion. This is something I discussed in “Bulls And Bears Are Both Broken Clocks:”

We are only human, and despite the best of our intentions, it is nearly impossible for an individual to be devoid of the emotional biases which inevitably leads to poor decision making over time. This is why all great investors have strict investment disciplines they follow to reduce the impact of their emotions.

At market peaks – everyone’s a “Genius.”Save