For the last several months we have been issuing repeated warnings about the market. While such comments are often mistaken for “being bearish,” we have often stated it is our process of managing “risk” which is most important.

Beginning in mid-January, we began taking profits out of our portfolios and reducing risk. To wit:

“On Friday, we began the orderly process of reducing exposure in our portfolios to take in profits, reduce portfolio risk, and raise cash levels.”

Since then, as you know, we have taken profits, and rebalanced risk several times within the portfolios.

Importantly, we approach portfolio management from a perspective of “risk management,” but not just in terms of “portfolio risk,” but “emotional risk” as well. By reducing our holdings to raise cash to protect capital, we can reduce the risk of our clients hitting that “threshold” where they potentially make very poor decisions.

In investing, the worst decisions are always made at the moment of the most pain. Either at the bottom of the market or near the peaks.

Investing is not always easy. Our portfolios are designed to have longer-term holding periods, but we also understand that things do not always go as planned.

This is why we have limits, and when things go wrong, we sell.

So, why do I tell you this?

On Friday/Monday, our “limits” were breached, which required us to sell more.

Two things have now happened which signaled us to reduce risk further in portfolios.

On Sunday, the Federal Reserve dropped a monetary “nuclear bomb,” on the markets. My colleague Caroline Baum noted the details:

“After an emergency 50-basis-point rate cut on March 3, the Federal Reserve doubled down Sunday evening, lowering its benchmark rate by an additional 100 basis points to a range of 0%-0.25% following another emergency meeting.

After ramping up its $60 billion of monthly Treasury bill purchases to include Treasuries of all maturities and offering $1.5 trillion of liquidity to the market via repurchase agreements on March 3, the Fed doubled down Sunday evening with announced purchases of at least $500 billion of Treasuries and at least $200 billion of agency mortgage-backed securities.

In addition, the Fed reduced reserve requirements to zero, encouraged banks to borrow from its discount window at a rate of 0.25%, and, in coordination with five other central banks, lowered the price of U.S. dollar swap arrangements to facilitate dollar liquidity abroad”

We had been anticipating the Federal Reserve to try and rescue the markets, which is why we didn’t sell even more aggressively previously. The lesson investors have been taught repeatedly over the last decade was “Don’t Fight The Fed.”

One of the reasons we reduced our exposure in the prior days was out of concern we didn’t know if the Fed’s actions would be successful.

On Monday, we found out the answer. The Fed may be fighting a battle it can’t win as markets not only failed to respond to the Fed’s monetary interventions, but also broke the “bullish trend line” from the 2009 lows.  (While the markets are oversold short-term, the long-term “sell signals” in the bottom panels are just being triggered from fairly high levels. This suggests more difficulty near-term for stocks. This was the “Red Line” we laid out in our last week, in the Special Report Red Line In The Sand:

“As you can see in the chart below, this is a massive surge of liquidity hitting the market at a time the market is hitting important long-term trend support.”

It is now, or never, for the markets.

With our portfolios already at very reduced equity levels, the break of this trendline will take our portfolios to our lowest levels of exposure. However, given the extreme oversold condition, noted above, it is likely we are going to see a bounce, which we will use to reduce risk into.

What happened today was an event we have been worried about, but didn’t expect to see until after a break of the trendline – “margin calls.”

This is why we saw outsized selling in “safe assets” such as REITs, utilities, bonds, and gold.

Cash was the only safe place to hide.

This also explains why the market “failed to rally” when the Fed announced $500 billion today. There is another $500 billion coming tomorrow. We will see what happens.

We aren’t anxious to “fight the Fed,” but the markets may have a different view this time.

Use rallies to raise cash, and rebalance portfolio risk accordingly.

We are looking to be heavy buyers of equities when the market forms a bottom, we just aren’t there as of yet.”

On Monday morning, we took some action.

We will only know in hindsight for certain, and we are not willing to risk more of our client’s capital currently.

There are too many non-quantifiable risks with a global recession looming, as noted by David Rosenberg:

This doesn’t include all the multiplier effects on other industries. It would not surprise me at all if real GDP in Q2 contracts at something close to an 8% annual rate (matching what happened in the fourth quarter of 2008 which was a financial event alone).

The hit to GDP can be expected to be anywhere from $400 billion to $600 billion for the year. But the market was in trouble even before COVID-19 began to spread, with valuations and complacency at cycle highs and equity portfolio managers sitting with record-low cash buffers. Hence the forced selling in other asset classes.

If you haven’t made recession a base-case scenario, you probably should. All four pandemics of the past century coincided with recession. This won’t be any different. It’s tough to generate growth when we’re busy “social distancing.” I am amazed that the latest WSJ poll of economists conducted between March 6-10th showed only 49% seeing a recession coming”.

The importance of his commentary is that from an “investment standpoint,” we can not quantify whether this “economic shock” has been priced into equities as of yet. However, we can do some math based on currently available data:

The chart below is annual nominal GDP, and S&P 500 GAAP earnings. 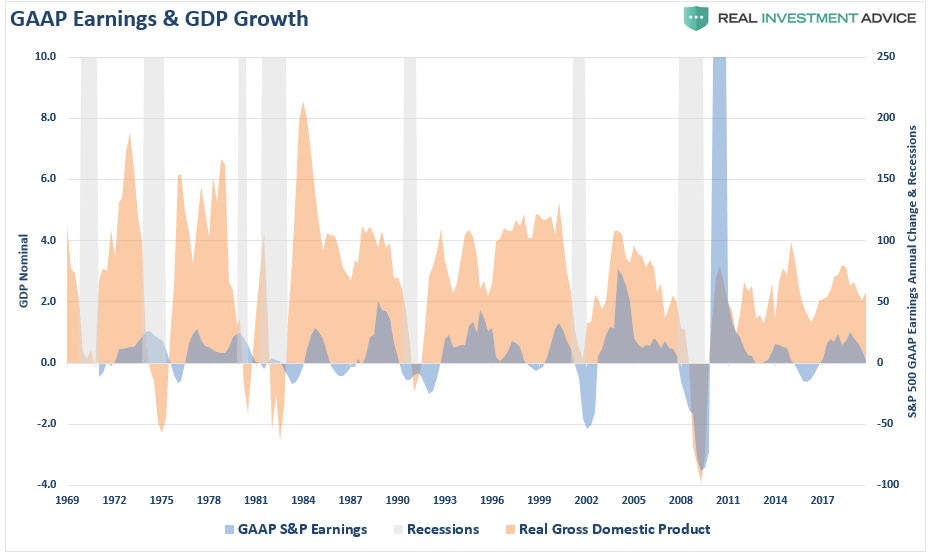 I am sure you will not be shocked to learn that during “recessions,” corporate “earnings’ tend to fall. Historically, the average drawdown of earnings is about 20%, however, since the 1990’s, those drawdowns have risen to about 30%.

If our, and Mr. Rosenberg’s, estimates are correct of a 5-8% recessionary drag in the second quarter of 2020, then an average reduction in earnings of 30% is most likely overly optimistic.

At various P/E multiples we can predict where “fair value” for the market is based on historical assumptions:

You can pick your own level where you think P/E’s will account for the global recession but the chart below prices it into the market. With the S&P 500 closing yesterday at 2386, this equates to downside risk of:

NOTE: I am not suggesting the market is about to decline 60-70% from the recent peak. I am simply laying out various multiples based on assumed risk to earnings. However, 15-18x earnings is extremely reasonable and possible.

When Too Little Is Too Much

With our risk limits hit, and in order to protect our clients from both financial and emotional duress, we made the decision that even the reduced risk we were carrying was still too much.

One concern, which weighed heavily into our decision process, was the rising talk of the “closing the markets” entirely for a week or two to allow the panic to pass. We have clients that depend on liquidity from their accounts to sustain their retirement lifestyle. In our view, a closure of the markets would lead to two outcomes which pose a real risk to our clients:

That risk, combined with the issue that major moves in markets are happening outside of transaction hours, are outside of our ability to hedge, or control.

This is what we consider to be unacceptable risk for the time being.

We will likely miss the ultimate “bottom” of the market?

But that’s okay, we have done our job of protecting our client’s second most precious asset behind their family, the capital they have to support them.

The good news is that a great “buying” opportunity is coming. Just don’t be in a “rush” to try and buy the bottom.

I can assure you that when we see ultimately see a clear “risk/reward” set up to start taking on equity risk again, we will do so “with both hands.”

And we are sitting on a lot of cash just for that reason.Save