As we wrap up Q2 of 2018, Michael Lebowitz and I present our “chartbook” of the “most important charts” from the last quarter for you to review.

In addition to the graphs, we provided a short excerpt from the article as well as the links to the original articles for further clarification and context if needed. We hope you find them useful, insightful, and importantly we hope they give you a taste of our unique brand of analysis. In most cases, the graphs, data, and commentary we provide are different from that of the business media and Wall Street. Simply put, our analysis provides investors an edge that few are privy to.

There Will Be No Economic Boom

“Wages are failing to keep up with even historically low rates of “reported” inflation. Again, we point out that it is likely that your inflation, if it includes the non-discretionary items listed above, is higher than “reported” inflation and the graph below is actually worse than it appears.” “But this is nothing new as corporations have failed to ‘share the wealth’ for the last couple of decades.”

Read: There Will Be No Economic Boom – Part 2

“Another major pillar of support for equity prices is corporate buybacks. The graph below shows the correlation between buybacks and the S&P 500 since 2000 (note that 2018 is an estimate).” “Further support for this theory comes from Goldman Sachs who claims that corporations have been the biggest class of buyer of equities since 2010 easily surpassing ETF’s, foreign investors, mutual funds, households and pension funds.”

The Illusion Of Prosperity

“The illusion of economic growth has been fueled by ever increasing levels of debt to support consumption. However, if you back out the level of debt you get a better picture of what is actually happening economically.” “When credit creation can no longer be sustained the markets must begin to clear the excesses before the cycle can begin again. That clearing process is going to be very substantial. With the economy currently requiring roughly $3.50 of debt to create $1 of economic growth, the reversion to a structurally manageable level of debt would involve a $25 trillion reduction of total credit market debt from current levels.”

The Average Not The Rule

“The chart below shows the S&P 500 as compared to annualized returns and the average of market returns since 1900.  Over the last 118 years, the market has NEVER produced a 6% every single year even though the average has been 6.87%.

However, assuming that markets have a set return each year, as you could expect from a bond, is grossly flawed. While there are many years that far exceeded the average of 6%, there are also many that haven’t. But then again, this is why 6% is the ‘average’ and NOT the ‘rule.'” Borrowing From The Future

As I discussed in “Sex, Money & Happiness:”

“The ‘gap’ between the ‘standard of living’ and real disposable incomes is more clearly shown below. Beginning in 1990, incomes alone were no longer able to meet the standard of living so consumers turned to debt to fill the ‘gap.’

However, following the ‘financial crisis,’ even the combined levels of income and debt no longer fill the gap. Currently, there is almost a $7000 annual deficit that cannot be filled.” “In the past, when Americans wanted to expand their consumption beyond the constraint of incomes they turned to credit in order to leverage their consumptive purchasing power. Steadily declining interest rates and lax lending standards put excess credit in the hands of every American. Such is why, during the 80’s and 90’s, as the ease of credit permeated its way through the system, the standard of living seemingly rose in America even while economic growth slowed along with incomes.”

“Since the end of 2014, investors are paying twice the rate of earnings growth.” “No matter how you look at the data, the point remains the same. Investors are currently overpaying today for a stream of future sales and/or earnings which may, or may not, occur in the future. The risk, as always, is disappointment.”

“As shown, when the spreads on bonds begin to blow out, bad things have occurred in the markets and economy.” “For the Federal Reserve, the next “financial crisis” is already in the works. All it takes now is a significant decline in asset prices to spark a cascade of events that even monetary interventions may be unable to stem.”

Read: The Next Crisis Will Be The Last

“Unfortunately, as much as we would like to believe that Navarro’s comment is a reality, it simply isn’t the case. The chart below shows the 5-year average of wages, real economic growth, and productivity.” “Notice that yellow shaded area on the right.  As I wrote previously:

‘Following the financial crisis, the Government and the Federal Reserve decided it was prudent to inject more than $33 Trillion in debt-laden injections into the economy believing such would stimulate an economic resurgence.”

“There are two other problems currently being dismissed to support the ‘bullish bias.’

The first, is that while investors have been chasing returns in the ‘can’t lose’ market, they have also been piling on leverage in order to increase their return. Negative free cash balances are now at their highest levels in market history.” “Yes, margin debt does increase as asset prices rise. However, just as the ‘leverage’ provides the liquidity to push asset prices higher, the reverse is also true.

The second problem, which will be greatly impacted by the leverage issue, is liquidity of ETF’s themselves.

When the ‘robot trading algorithms’  begin to reverse, it will not be a slow and methodical process but rather a stampede with little regard to price, valuation or fundamental measures as the exit will become very narrow.”

Read: The Risk Of Algo’s

“The chart below is $1000 invested in the S&P 500 in 1997 on a capital appreciation basis only. The reddish line is just a ‘buy and hold’ plot while the blue line is a ‘switch to cash’ when the 200-dma is broken. Even with higher trading costs, the benefit of the strategy is readily apparent.” “To Ben’s point, what happens to many investors is they get ‘whipsawed’ by short-term volatility. While the signal gets them out, they ‘fail’ to buy back when the signal reverses.

‘I just sold out, now I’m supposed to jump back in? What if it crashes again?’

The answers are ‘yes’ and ‘it doesn’t matter.’ That is the just part of the investment strategy.

But such is incredibly hard to do, which is why the majority of investors fail at investing over time. Adhering to a discipline, any discipline, is hard. Even ‘buy and hold,’ fails when the ‘pain’ exceeds an individuals tolerance for principal loss.”

“Rising interest rates are a “tax.” When combined with a stronger dollar, which negatively impacts exporters (exports make up roughly 40% of total corporate profits), the catalysts are in place for a problem to emerge.

The chart below compares total non-financial corporate debt to GDP to the 2-year annual rate of change for the 10-year Treasury. As you can see sharply increasing rates have typically preceded either market or economic events. Of course, it is during those events which loan default rates rise, and leverage is reduced, generally not in the most “market-friendly” way.” Not What It Seems

“In the past, when Americans wanted to expand their consumption beyond the constraint of incomes they turned to credit in order to leverage their consumptive purchasing power. Steadily declining interest rates, and lax lending standards, put excess credit in the hands of every American. Such is why, during the 80’s and 90’s, as the ease of credit permeated its way through the system, the standard of living seemingly rose in America even while economic growth slowed along with incomes.” “As I recently discussed with Shawn Langlois at MarketWatch:

With a deficit between the current standard of living and what incomes, savings and debt increases can support, expectations of sustained rates of stronger economic growth, beyond population growth, becomes problematic.

For investors, that poses huge risks in the market.

While accounting gimmicks, wage suppression, tax cuts and stock buybacks may support prices in the short-term, in the long-term the market is a reflection of the strength of the economy. Since the economy is 70% driven by consumption, consumer indebtedness could become problematic.” “The chart below is the S&P 500 TOTAL return from 1995 to present. I have then projected for using variable rates of market returns with cycling bull and bear markets, out to 2060. I have then run projections of 8%, 7%, 6%, 5% and 4% average rates of return from 1995 out to 2060. (I have made some estimates for slightly lower forward returns due to demographic issues.)” “Given real-world return assumptions, pension funds SHOULD lower their return estimates to roughly 3-4% in order to potentially meet future obligations and maintain some solvency.

It is the same problem for the average American who plans on getting 6-8% return a year on their 401k plan, so why save money? Particularly when the mainstream media, and financial community, promote these flawed claims to begin with.”

Read: Retirees Face A Pension Crisis Of Their Own

How Long To Get Back To Even

“The chart below shows the total real return (dividends included) of $1,000 invested in the S&P 500 with dollar cost averaging (DCA). While the periods of losing and recovering are shorter than the original graph, the point remains the same and vitally crucial to comprehend: there are long periods of time investors spend getting back to even, making it significantly harder to fully achieve their financial goals. (Note the graph is in log format and uses Dr. Robert Shiller’s data)” 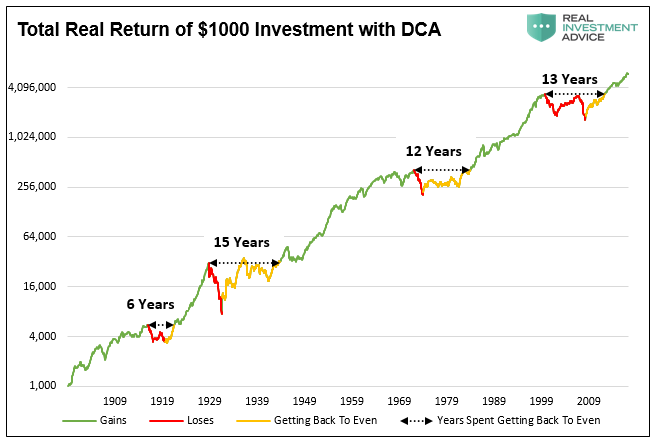 “The feedback from Josh, Dan and others expose several very important fallacies about the way many professional money managers view investing.

The most obvious is that investors do NOT have 118 years to invest.”

Read: Myths Of Stocks For The Long-Run