A version of this article originally appeared in Citywire.

Emerging market stocks have lost their luster for US investors in 2018. After gaining more than 35% in 2017, the MSCI Emerging Markets index dropped by 6.7% over the first two quarters of 2018. Investors have been spooked by president Trump threatening a tariff war and by rising interest rates in the US, causing the dollar to soar and squeezing emerging market countries and companies with dollar-denominated debt.

But should they abandon their allocations to emerging market stocks? At least two prominent investors I spoke to thought these assets were cheaper and more enticing than their US counterparts, but they advocated rather different approaches to the asset class.

Jeffrey Sherman, deputy CIO at DoubleLine Capital, felt that emerging market valuations were cheap, but he will wait for markets to stabilize before adding more exposure. ‘[Over the past month] the pain hasn’t really stopped,’ he said. 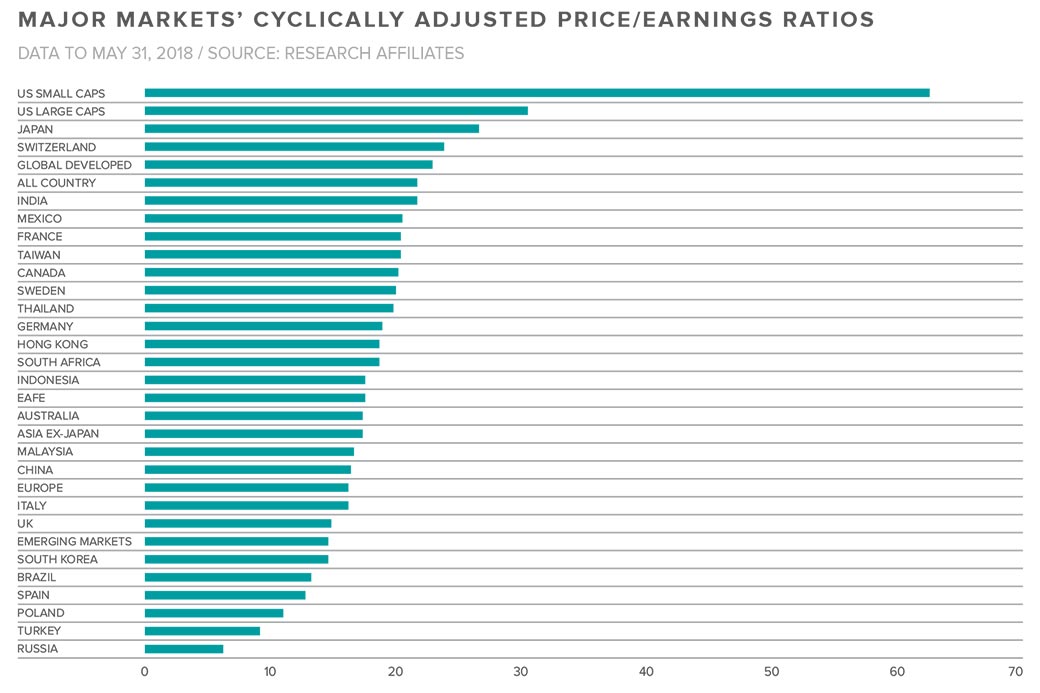 DoubleLine manages stock funds by applying the Shiller price/earnings ratio (price relative to the past decade’s real, average earnings) to market sectors and investing in the ones that are cheapest relative to their own histories. Many investors use the metric to gauge the relative value of country and regional markets. Although Sherman noted that the data doesn’t go back very far for emerging markets, he argued that the Shiller metric still has some validity with regard to them and currently shows that emerging market stocks are cheaper than their developed market counterparts.

Brightman argued that emerging market countries are now healthier than they were during previous crises, and that their stocks are cheap. Since 2000, China’s real GDP per capita in purchasing power parity terms has jumped by 60%. India’s, South Korea’s and Taiwan’s have each grown by more than 20%, while Italy’s has contracted. Germany’s, Japan’s, the UK’s and the US’ have all grown by between 7% and 8%. Emerging market countries have also gradually increased their foreign exchange reserves.

This more certain financial footing means that emerging markets are not at risk of a funding crisis. Using Russia as an example (and without arguing for a major allocation to the country), Brightman suggested that, for all its political problems, ‘Russia does not need to borrow from abroad to finance its consumption and investments. It sells more in oil and gas to its European neighbors than it buys in goods from the rest of the world. With little external debt, ample foreign exchange reserves and a large current account surplus, the risk of a financial crisis is remote – especially with the price of oil hovering between $60 and $80 a barrel.’

Brightman agreed with Sherman that emerging market stocks trade at cheap valuation multiples. Before the 1997/1998 crisis, emerging market stocks were trading at higher cyclically adjusted price/earnings (Cape) multiples than US stocks, owing to high growth expectations for the former. Today though, ‘emerging market equities are priced at less than half of the US Cape… [and] they seem to provide fair compensation for their risks,’ he said.

A low Cape ratio doesn’t mean that emerging market stocks are poised to rally soon. But it does suggest that they will have delivered better returns than US stocks by the end of a decade.