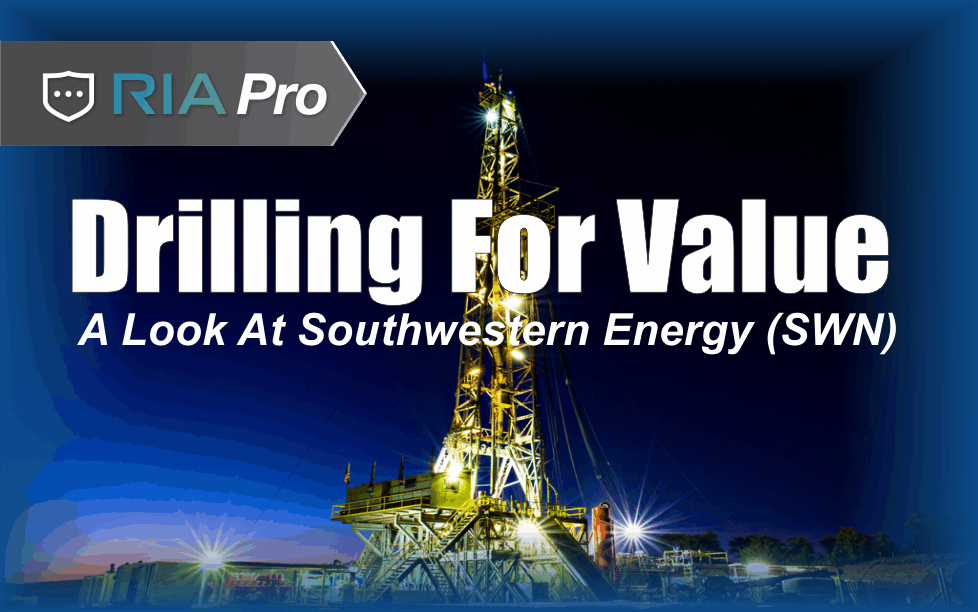 We have made it clear on numerous occasions that there are not many value propositions available in the equity markets for long-term shareholders. Most recently in Allocating on Blind Faith, we highlighted how three widely followed valuation levels portend low single-digit returns for the coming decade. While a dismal outlook that does not mean that opportunities do not exist.

One asset class in particular that continues to catch our attention is commodities. The following graph shows how cheap the Goldman Sachs Commodity Index (GSCI) has become compared to the S&P 500. In the same way that a metal detector can identify the location of possible treasures, this graph provides a strong signal there is potential value in commodity-linked investments. Those inclined must simply “dig.” Within the commodity sector, we have a few stocks that are on our watch list for possible investment. In this article, we explore one of them, Southwestern Energy Company (SWN). SWN is a natural gas exploration and production company headquartered in Texas. It is somewhat unique in the energy sector as it is one of a few publically traded companies that are almost entirely focused on natural gas. Most of SWN competitors have much higher exposures to oil and other energy products. In 2017, for instance, 97% of SWN’s revenue was derived from the production, transportation, and marketing of natural gas (NG).

By using both a technical and fundamental examination, we can better assess whether SWN is worth owning.

We start our technical study with a short-term graph covering the last 12 months and then expand further back in time for a broader context as to where SWN has traded, relevant trends, support and resistance levels, and what that might portend for the future.

SWN appears to have bottomed following a significant decline over the last few years. There is reason to believe a true bottom has formed as shown in the one-year graph below. Three bullish buy signals based on the Moving Average Convergence Divergence (MACD) indicator have occurred as indicated by the dotted vertical lines. Additionally, the 50-day moving average crossed over the 200-day moving average in July. Further a strong support line (gold dotted line) has formed and has been tested successfully on numerous occasions. Currently, the support line is near $4.70 which provides a solid level to establish risk parameters for a potential trade. That price level, less a 3% cushion ($4.55), should serve well as a stop loss acting as a trigger to reduce or eliminate the position and risk if SWN closes below that price level. The longer term, 10-year chart below provides a different perspective of SWN. Since 2014, SWN has declined by almost 90%. However, since March it has shown signs of bottoming. While the shorter-term chart leaves room for optimism, the longer-term chart certainly gives reason for pause. The current price ($5.00) is not far from the 3-year downtrend resistance line ($5.74) which has capped every rally since 2014.  If SWN were to convincingly close through that 3-year resistance line, it would greatly improve our longer-term confidence and appetite for risk.

Also of concern, the stock is considered overbought based on the Williams % Ratio (momentum indicator). We are not overly concerned with the Williams % Ratio as the ratio can stay at extreme levels for long periods without resulting in a meaningful change in the direction of a security’s price.

If SWN is reversing the decline of the prior years, we would like to see it establish a pattern of higher highs and higher lows. Thus far, that has only recently begun to occur but six months certainly does not make a dependable trend.

The technical picture for SWN is tilted somewhat favorably as it allows us to establish guardrails for taking additional risk. Using the charts as a framework, one can enter a long SWN position with a downside stop loss of 4.55 (4.70 less a 3% cushion). At the same time, if the upside trendline is broken the next price target is the November 2017 high of 6.72. The gain/loss ratio of the potential short-term upside target (6.72) to the downside stop loss target (4.55) is over 4:1, a compelling data point.

The sharp decline in the share price of SWN compressed the valuation multiples that investors were willing to pay. In 2007, for instance, SWN’s price to sales ratio was over 10. Since then it has steadily eroded to its current level of 1. Price to trailing 12 months earnings (P/E) has also cheapened significantly, having steadily dropped from the mid 20’s to its current level of 8.80.

From a liquidity perspective, SWN total liabilities have declined significantly over the last four years. Its ratio of long-term debt to equity now stands at 158% versus over 1000% in 2015. While financial leverage is not as great as it was, we are in turn provided a greater level of comfort in their ability to service the debt.

Among the many fundamental indicators we use to evaluate stocks for inclusion in our portfolios, two are worth emphasizing. They are the Piotrosky F Score and Mohanram Score.

Of additional interest Zacks has strong ratings in various metrics as follows:

SWN is trading at a much cheaper valuation compared to years past. That said, we must remain vigilant as SWN relies on one product, NG. Swings in the price of NG due to ever-changing supply and demand variables can be violent and earnings can change sharply.

“Our time-tested, long-range formula is pointing toward a very long, cold, and snow-filled winter,” -Peter Geiger in a statement on the Farmers’ Almanac website.

We start this section with the obvious disclaimer that we are not weathermen. Nor would we recommend an investment based on a weather forecast. That said the weather outlook can greatly affect sentiment and the demand for NG and therefore affect SWN’s earnings and stock price.

In the short run, it behooves us to understand how the expectations for a cold winter, as is expected by some long-range meteorologists, and the potential for rising NG prices might affect the price of SWN. The graph below shows a significant one-year rolling correlation between the prices of NG and SWN and therefore short-term holders should consider that weather could easily play an outsized role in the pricing of SWN. Next, we compare how NG has performed by month. In particular, we are looking for seasonal outperformance or underperformance patterns in respective months that might be weather-related. As shown, NG has produced the highest average gains in September and October over the past 27 years. This is likely due to a combination of pre-winter expectations for higher NG prices as well as hedging activity taking place in NG. Further, those months were also affected in certain years by seasonal hurricane activity which can temporarily boost the price of NG.

Interestingly, note that the months of January and February, despite what is frequently peak NG usage, tend to be poor months for NG price performance. The winter months are when the rubber hits the road and NG prices fail, at times, to live up to the expectations formed in the summer and fall months.

Given SWN’s strong correlation to NG, we should keep these seasonal tendencies in mind.

In a market dearth of value, we think SWN provides an interesting opportunity. While its longer-term trend is poor, its recent trading performance and solid fundamentals provide what appears to be a constructive asymmetry of risk and reward. Further seasonal patterns in NG and speculative forecasts for a cold winter argue for a boost in the short-term.

On the basis of those factors, SWN appears more than fairly priced and cheap compared to most other stocks with a compelling upside-to-downside ratio. Despite the seasonal volatility associated with the weather, the fundamentals argue that SWN represents decent value and might prove to be a good long-term hold. Further, it provides some measure of diversification as it tends to be poorly correlated with the stock market.

All data in the article was provided by Zacks and the graphs from Stockcharts.com