Importantly, while the market surged higher after the comments on the suggestion the Fed was close to ‘being done’ hiking rates, it also suggests the outlook for inflation and economic growth has fallen. With the Fed Funds rate running at near 2%, if the Fed now believes such is close to a ‘neutral rate,’ it would suggest that expectations of economic growth will slow in the quarters ahead from nearly 6.0% in Q2 of 2018 to roughly 2.5% in 2019.” 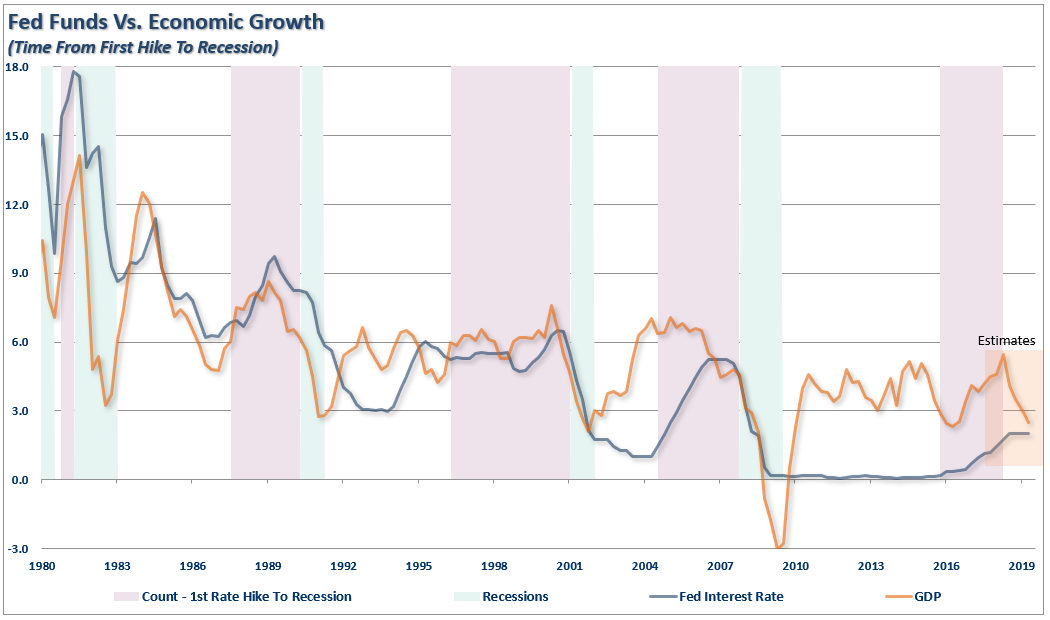 Now, there are many who continue to suggest “this time is different” and an inverted yield curve is not signaling a recession, and Jerome Powell’s recent comments are “in line” with a “Goldilocks economy.”

But historically speaking, while an inversion of the yield curve may not “immediately” coincide with a recessionary onset, given its relationship to economic activity it is likely a “foolish bet” to suggest it won’t. A quick trip though the Fed’s rate hiking history and “soft landing” scenarios give you some clue as to their success. While the Fed has been acting on previously strong inflationary data due to surging oil prices, the real long-term drivers of inflation pressures weren’t present. I have commented on this previously, but Kevin Giddis from Raymond James had a good note on this:

“We have always known that the bond market wasn’t as worried about inflation as the Fed, but it really needed the Fed to come out and indicate a ‘shift’ in that way of thought to seal the deal.”

This is exactly correct, and despite the many arguments to the contrary we have repeatedly stated the rise in interest rates was a temporary phenomenon as “rates impact real economic activity.” The “real economy,” due to a surge in debt-financed activity, was not nearly strong enough to withstand substantially higher rates. Of course, such has become readily apparent in the recent housing and auto sales data.

Flat As A Pancake

All of sudden, the bond market has woken up to reality after a year-long slumber. The current spread between the 2-year note and the 10-year note is as tight as it has been in many years and has rarely occurred when the economic fundamentals were as strong as many believe.

The reality, of course, is much of the current strength in economic activity is not from organic inputs in a consumer-driven economy, but rather from one-off impacts of several natural disasters, a surge in consumer debt, and a massive surge in deficit spending. To wit:

“The problem is the massive surge in unbridled deficit spending only provides a temporary illusion of economic growth. Over the long-term, debt leads to economic suppression. Currently, the deficit is rapidly approaching $1 Trillion, and will exceed that level in 2019, which will require further increases in the national debt.”

“There is a limited ability to issue debt to pay for excess spending. The problem with running a $1 Trillion deficit during an economic expansion is that it reduces the effectiveness of that tool during the next recession.”

Our assessment of Powell’s change in tone comes from the message the bond market is sending about the risk to the economy. Since economic data is revised in arrears, the onset of a recession will likely surprise most economists when they learn about it “after the fact.”  Let’s go back to Kevin:

“Here is what we know right now:

1) The U.S. economy seems to be slowing, falling under the weight of higher borrowing costs. What’s hard to predict is whether this is a trend change or a temporary pause.

2) The Fed appeared to blink last week, but we won’t know for sure until December 19th when they release their Rate Decision and ‘tell’ the market what the forward-looking path looks like to them.

3) Inflation is well-contained. For all of you who left town riding on the ‘inflation train,’ welcome back.

4) Global economies are weakening and could get weaker.

5) Friday’s release of the Employment Report should give the market guidance on wages, but not much else.

Kevin is correct, take a look at inflation breakeven rates. It is quite likely these are not temporary stumbles, but rather a more important change in the previous trends. More importantly, the “global weakness” has continued to accelerate and given that roughly 40% of corporate profits are driven by exports, this does not bode well for extremely lofty earnings forecasts going into 2019.

Caroline Baum had an interesting comment on MarketWatch on Tuesday morning:

“I read with interest the articles last week about the Federal Reserve’s new “unpredictable” and “flexible” approach to monetary policy. No longer can financial markets rely on the gradual, premeditated and practically pre-announced adjustments to the benchmark overnight interest rate, according to these analyses. From now on, the Fed will be ‘data dependent.’”

The whole article is worth a read, but the point being made is that the Fed has always been “data dependent” even if their ability to read and interpret the data has been somewhat flawed. The table below is the average range of their predictions for GDP they publish each quarter versus what really happened. As Caroline noted, the September projections pegged the “neutral rate” range at 2.5-3.5% with a median estimate of 3%. If Powell is indeed suggesting that the neutral rate has fallen to the low-end of that range, he is likely only confirming what the “yield curve” has been telling us for months. As I quoted previously:

“The yield curve itself does not present a threat to the U.S. economy, but it does reflect a change in bond investor expectations about Federal Reserve actions and about the durability of our current economic expansion.”

Importantly, yield curves, like valuations, are “terrible” with respect to the “timing” of the economic slowdown and/or the impact to the financial markets. So, the longer the economy and markets continue to grow without an event, or sign of weakness, investors begin to dismiss the indicator under the premise “this time is different.”

The spread between the 10-year and 2-year Treasury rates, historically a good predictor of economic recessions, is also suggesting that Powell may have “woken up to smell the coffee.” While the curve is not inverted as of yet, the trend of the spread is clearly warning the economy is much weaker much of the mainstream economists suggests. (The boosts to economic growth are now all beginning to fade and the 2nd-derivative of growth will begin to become more problematic starting in Q4.) Mr. Powell most likely also realizes that continuing to tighten monetary policy will simply accelerate the time frame to the onset of the next recession. In fact, there have been absolutely ZERO times in history that the Federal Reserve has begun an interest-rate hiking campaign that has not eventually led to a negative outcome.

The only question is the timing.

There are currently too many indicators already suggesting higher rates are impacting interest rate sensitive, and economically important, areas of the economy. The only issue is when investors recognize the obvious and sell in the anticipation of a market decline.

As I discussed previously, the stock market is a strong leading indicator of economic turns and the turmoil this year may be signaling just that.

Believing that professional investors will simply ignore the weight of evidence to contrary in the “hopes” this “might” be different this time is not a good bet as “risk-based” investors will likely act sooner, rather than later. Of course, the contraction in liquidity causes the decline in asset prices which will contribute to the economic contraction as consumer confidence is shattered. Importantly, since recessions are only identified in hindsight when current data is negatively revised in the future, it won’t become “obvious” the yield curve was sending the correct message until far too late to be useful.

While it is unwise to use the “yield curve” as a “market timing” tool, it is just as unwise to completely dismiss the message it is currently sending.