Yes, there has definitely been an improvement in the labor market since the financial crisis. I am not arguing that point. The financial markets, investors, and analysts eagerly anticipate the release of each employment report hoping for a “Goldilocks” report which is “not so hot” the Fed is pushed to raise rates, but “not too cold” either.

My problem has been the discrepancy between these reports as compared to what is happening in the underlying economy. The chart below shows employment gains from 1985-2000 versus wages and economic growth rates. 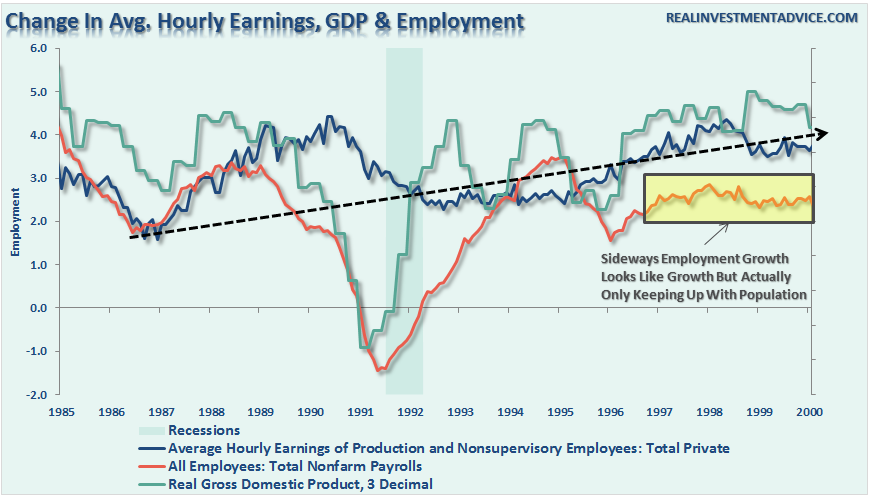 IF employment was indeed growing at the fastest pace since the 1990’s, then wage growth, and by extension, economic growth should be at much stronger levels as well. That has YET to be the case outside of mandated minimum wage increases.

However, it was Bob Bryan via Business Insider who inadvertently stumbled upon the issue I have discussed previously that explains the primary problem with the BLS employment reports. To wit:

“Both the formation of firms and establishments, have dropped off precipitously since the financial crisis and remained low.

This is important because new businesses typically hire faster and produce higher levels of productivity than firms that have been around for a while. Thus the decline in business formation can explain some of the labor market’s post-recession problems, and is at least part of the reason for the steep drop in productivity.” What Bob missed was the connection between the falloff in formations and the BLS employment reports. Part of the reporting problem that has yet to corrected by the BLS is the continued overstatement of jobs through the “Birth/Death Adjustment” which I addressed recently in greater detail. “This chart CLEARLY shows that the number of “Births & Deaths” of businesses since the financial crisis have been on the decline. Yet, each month, when the market gets the jobs report, we see roughly 180,000 plus jobs.

The chart below shows the differential in employment gains since 2009 when removing the additions to the monthly employment number though the “Birth/Death” adjustment. Real employment gains would be roughly 5.26 million less if you actually accounted for the LOSS in jobs discussed in the first chart above.” Another problem is the detachment between retail employment and what is actually occurring with retail sales. To wit:

“This is also one of the great dichotomies of the employment reports that continues to show strong hiring in retail services despite a weakening outlook for, and actual, retail sales.” Furthermore, despite hopes of continued debt-driven consumption, business owners are still faced with actual sales that are still well below long-term trends. Since revenue is what ultimately drives expansion, it is not surprising that when asked whether this is a “good time to expand” their operations, the large majority of responses remain negative. That view has remained unchanged since the depths of the financial crisis.”

Business owners are the single most astute allocators of capital on the planet.

Why? Simple. If businesses continually misallocate capital over an extended period of time, they will not be in business for long. If sales are declining – companies tend to reign in hiring as a defense against falling profitability. If profits are declining due to cost increases, like spiraling healthcare premiums, employment tends to be curtailed.

Employment, which is the largest expense for companies, is driven by the rise and fall of profits. Lastly, the Fed’s own Labor Market Conditions Index (LMCI) tends to lead the overall change in the BLS employment reports. The chart below is a 12-month average of the LMCI as compared to the annual change in employment. Despite the Fed’s “jawboning” about the strength of the labor market as a reason to “normalize” interest rates, their own indicator likely confirms why they have not done so as of yet. The historic correlation is extremely high and the recent divergence will likely not last long as the LMCI approaches NEGATIVE growth. With economic data continuing to weaken, it will likely not be long before employment reports begin to consistently miss overly optimistic expectations.

It is quite evident there is something amiss about the BLS’ employment reports. The disparity between the continued addition of business startups to the employment adjustments is likely creating a rather large dislocation between the data and reality. This gap puts the Federal Reserve at risk of a policy mistake by tightening monetary policy precisely at the wrong time. As BI noted:

“A recent paper from the Federal Reserve Board (and referenced by Vice Chair Fischer in his Jackson Hole speech) estimates that there is a persistent increase in both GDP and productivity as a result of changes in the number of start-ups. Specifically, they found that a one-standard deviation shock to the number of start-ups led to an increase of real GDP culminating to 1-1.5% and lasting 10 years or longer. This suggests a notable and lasting impact on the economy from weak rate of business entry over the past decade.”

Is there an exceptional and unaccounted for margin of error in the employment data? Such would appear to the be the case as Bob’s article supports.

The problem for the Fed is once again the window for a “rate hike” has likely closed. Economic uncertainty, deflationary threats, and market volatility will likely keep them boxed in for now. Unfortunately, the recent spike in LIBOR has likely already done a bigger job of tightening monetary policy than the Fed actually intended to do.

This could be a problem.