Bonds Are Stocks Without A Circuit Breaker

We are thrilled to introduce Samantha LaDuc, the Founder of LaDucTrading.com and the CIO at LaDuc Capital LLC.

Samantha LaDuc is known for timing major inflection points in equities, commodities, bonds/rates, currencies and volatility. As a Macro-to-Micro strategic technical analyst, educator and trader, she makes her insights available to active traders and investors who want to minimize risk while seizing year-making opportunities.

Don’t Overthink The Market. It’s Not That Smart.

That is what those with Consensus Opinions have done if they have stayed bullish. After all, there is evidence to support their claims:

But there are those who feel strongly that ignorance is not bliss. We think and overthink the markets against the weight of evidence that is somewhere between Risk-Aware and Risk-Averse. It’s not a fair comparison, but I will use it anyway: Even Bernie Madoff had fabulous returns until he didn’t. In the same way, investors who are full of fear that the next correction will be “The Big One’ feel in large part this way because, like Madoff, there is no real price discovery. There is no way in fact to price risk!

As such, volumes have been historically low which means it is quite easy to move markets in either direction, especially if you are an Algo. The direction, just happens to be up. Nice for bulls that the designers of these algorithms programmed it this way! And that beats the alternative. Bears are not wishing for the markets’ demise. They are just having a hard time to trust these markets as corporate profits are declining, economic data is declining (labor market data are trailing indicators.), debt and deficits are exploding and inversion of yield curve shows big concerns from big investors.

Be Careful What You Ask For Bulls

A higher stock market could actually be its undoing. Money has flown out of equities and into bonds ever since the global financial crisis of 2008/2009, but especially since 2018 when Trump started the Trade War with China. This year has seen this trend continue:

But just as bonds have been bubbly, equities have risen in large part due to stock buybacks, fueled by cheap money made available from Fed monetary policy: 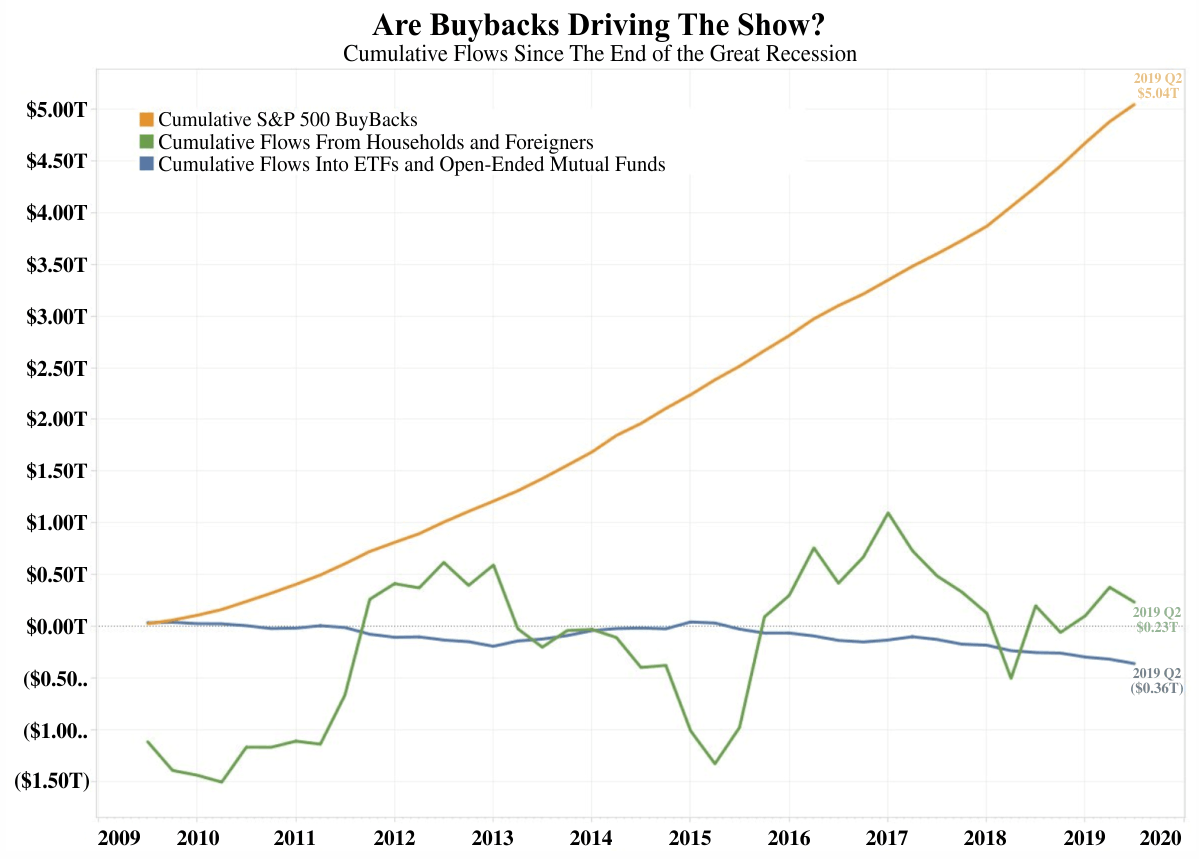 Ned Davis Research: S&P 500 would be 19% lower between 2011 and the first quarter of 2019 without buybacks. The broad market is up more than 125% in that time while net buybacks have totaled about $3.5 trillion.

So equities have risen strongly from a “generational low” in 2009 when Fed introduced QE. Combine higher earnings with consolidation of buying in Large Cap and Tech from passive investing (and a few central banks like Switzerland) and part of the advance can be explained. Include the availability of ‘cheap money’ made available from QE liquidity and Large Cap/Tech heavily weighted in the indices and we have the other part of the equation explaining the 10-year bull run. Now add in stock buybacks, which reduce the number of shares outstanding which inflates a company’s EPS contributing to its P/E expansion, which in turn triggers analysts to recommend these stocks to funds. And yet, actual fund flows favor bonds and cash over equities!

CEO Confidence is at historic lows and why wouldn’t it be? Why would they seek to expand production, risk not getting the return from that investment, when the Fed is communicating danger and Trump’s Trade War represents danger and global trade and earnings are both contracting without a trusted resolution in sight? Same thing goes for chasing all-time-highs in the stock market. So why wouldn’t both fall together in a deleveraging liquidity event?

There are plenty of wealth managers who understand this underlying dynamic and as a result have little to no trust in a market based on a closed-loop system of Fed money, Passive Investment, Algos and Stock Buybacks. Until now, there was also very little reason to jump in front of this train.

Bonds Are The New Stocks

At some point this momentum-driven bond bubble will be unwound. Granted, it is like a fully-loaded locomotive that needs miles and miles of track to even come to a stop so as not to derail, but wouldn’t it be logical, and somewhat ironic, if it is in fact higher equities that triggers the selling of bonds that causes the next market correction?

It’s going to plan perfectly when bonds roll over, structurally forcing rates to pop, then oil spikes with the Reflation trades (think inflation spike), while Momentum stocks are sold off because they’re overvalued relative to Value…and cause indices to correct. This move could be quicker than folks think as liquidity is ‘challenged’ in bonds sell off and Volatility in the bond market spills over into equities.  Samantha LaDuc

Now let me add some more non-consensus opinion for a Bond Sell-Off: Impeachment prospects pick up and with it Elizabeth Warren’s chance of becoming President.

At risk: the practice of buying back shares as perceived by Presidential candidates to artificially raise prices for the benefit of management. Should this practice be limited or banned by an incoming President opposed to this practice – like Warren or Sanders, as both filed bills to do so and have announced as part of their economic platform in their election campaign – then the market should start to price this in. It hasn’t yet. But unlike stocks, there are no circuit breakers for bonds. And fixed income folks move together in large part so sudden moves can upend markets. Consider even below-investment grade bonds. They don’t trade anywhere near the volume the ETFs they populate. In a fast-moving bond market, those ETFs can sink hard and fast as the underlying collateral moves. But unlike their ETF equivalent that trades on the stock market with a ‘limit-down’ circuit breaker, the bonds will be under more pressure and settle with huge mark downs. Credit spreads will be widened and funding markets can freeze.

Ignorance Is Not Bliss

For over a decade, money has been coming out of equities and going into the bond market as investors continue to anticipate imminent market collapse. Investors were full of fear at the March 2009 lows and they are full of fear at the 2019 highs. Investors are so fearful that today they are willing to accept a 1.8% return on a 10-year U.S. treasury note rather than a near 2% return on the S&P 500. So in essence, ‘risk free money’ has been parked at the same time ‘risk free money’ from Fed policies of monetary easing has flooded markets with liquidity, which in turn has fueled stock buybacks and speculation.

But now there is a sense the Fed may be losing control. Now, Fed liquidity is going into Repo markets to backstop bank liquidity requirements (and concerns) to the tune of $1T to start over the next year, driving up the cost of collateral in their overnight financing activities. Fed liquidity is also needing to be printed to fund ever-growing fiscal deficits which are exploding and showing no signs of slowing. If it wasn’t for the Fed, and corporate stock buybacks, and a mountain in cash which private equity has leveraged, our markets wouldn’t be pushing through all time highs. They would be cut by a third. That is the growing body of fundamental evidence that the bears can point to when growling at the status quo of bulls’ complacency.

The great rotation out of bonds will probably be tested before proven. When bonds roll over, structurally forcing interest rates to pop, look for commodities to spike and the reflation trade to move higher in place of momentum trades. Be aware that as bonds sell off, unlike equities, they don’t experience controlled pockets of selling or slow distribution over weeks and months, and there is no backstop for ‘limit down’ selling which triggers halts. There is but one very teeny, tiny exit door. And their hedging strategies of shorting VIX will not help them. The unwind of the short VIX trade (currently at all time highs) would be unwound violently causing a sudden equity sell-off.

Forced Liquidation will beget forced liquidation in both bonds and equities. Favorites like AAPL and MSFT will need to be sold to meet margin calls. Shorting will not be a six-month ride down the waterfall like in 2008. A liquidity freeze is one thing, but a panic for USD, aka CASH, where there isn’t enough of it, globally, can morph into a liquidity flash crash event and convulse for both stock and bond sell-offs within weeks not months. Risk premiums will be so quickly elevated in this race for liquidity and in this time of quant funds and algos that even those who try to short, let alone protect, in the thick of this downdraft will be played by market makers.

And that’s why Bears are not ready to capitulate, as the risk is too great that a true liquidity crisis – for CASH – creates panic and in panic everything sells off – Even gold and bitcoin are not safe. Only those who are sitting on the sidelines will be in a position to pick up shares on the cheap.

LaDuc Trading/LaDuc Capital LLC Is Not a Financial Advisor, RIA or Broker/Dealer.  Trading Stocks, Options, Futures and Forex includes significant financial risk. We teach and inform. You enter trades at your own risk. Learn more.