Back in April, I penned an article laying out 10-reasons why from a fundamental and technical perspective the bull market may have ended. To wit:

“I think the 9-year old bull market may have ended in February. I could be wrong. Actually, I hope that I am because managing money is far easier when markets are rising.”

Fortunately, after 145 days of making up lost ground, the bull market has resumed.

While this is good news, the reasons for my previous concern still exist, along with others, which I reiterated in this past weekend’s newsletter:

“While the market was temporarily distracted by ‘Jerome Powell’ on Friday, and now NAFTA, in the rush to push the S&P 500 to ‘all-time highs’ (insert roar of crowd), earnings season is coming to its conclusion and all eyes will refocus back on trade, tariffs, and geopolitical risks. Here is my list of concerns from last week:

As I stated then, the issue isn’t any one of them in particular – but the linkages between all of them which is important to watch.

Unfortunately, we generally never know what the ‘one thing’ is until after the fact. This is why having a plan to manage risk, a discipline to act, and a process to follow which is critically important to long-term investing success.”

Regardless of the reasons, the breakout Friday, with the follow through on Monday, is indeed bullish. As we stated repeatedly going back to April, each time the market broke through levels of overhead resistance we increased equity exposure in our portfolios. The breakout above the January highs now puts 3000 squarely into focus for traders. This idea of a push to 3000 is also confirmed by the recent “buy signal” triggered in June where we begin increasing equity exposure and removing all hedges from portfolios. The yellow shaded area is from the beginning of the daily “buy signal” to the next “sell signal.” However, with the markets VERY overbought on a short-term basis, we are looking for a pullback to the previous “breakout” levels, or a consolidation of the recent gains, to increase equity exposure further.

As we noted several weeks ago when we upgraded our 401k Portfolio manager back to 100% of model weights, the weekly “buy signal” suggested the return to a more bullish backdrop for investors. 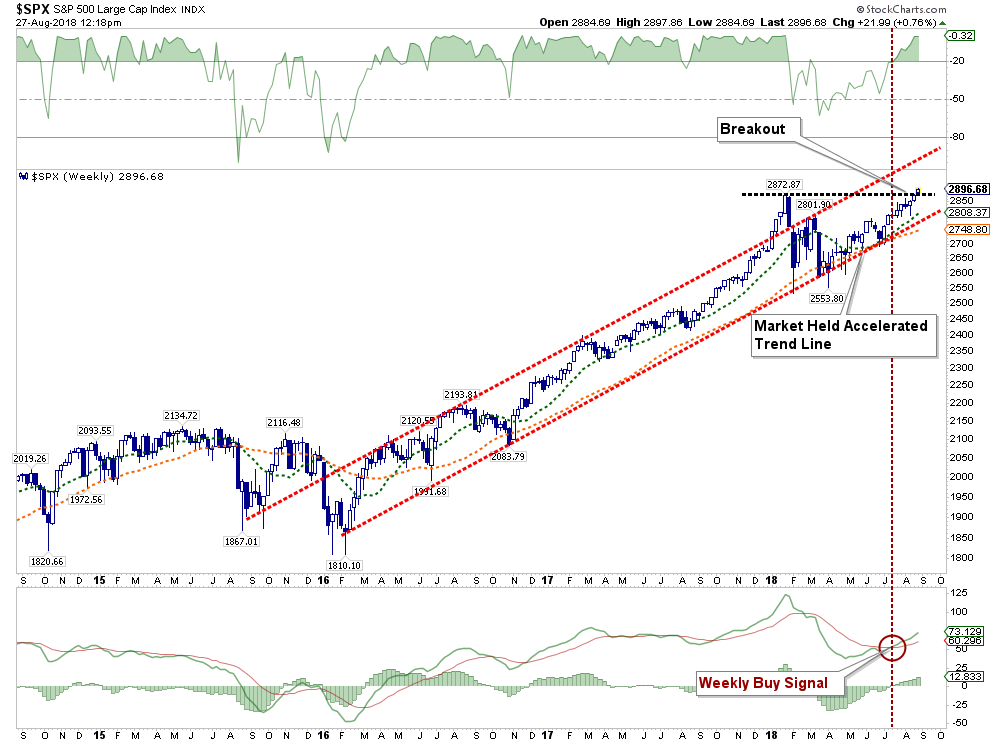 As shown in the longer-term weekly chart below, these buy/sell signals do not occur with great regularity. This is why we use them to drive the allocation model for 401k plans where “trading restrictions” make portfolio management more difficult. Nonetheless, while these signals are indeed not always perfect, they have worked to reduce both risk and emotional mistakes during corrective periods.

The longer-term “sell” signal was “almost” triggered this summer, but the July and August rally, so far, has kept the “buy signal” intact. However, given the signal is at an extremely elevated level, a  correction that ultimately triggers that “sell signal” will likely lead to a much more significant drop in equity prices. Here is that same set of signals above applied to our 401k allocation model which is published each week in the newsletter. This model has been managed “live” since 2006 and published weekly. On a short to intermediate-term basis, the bulls are clearly in charge of the market. Whatever prevailing “risks” which exist are quickly “priced in” and dismissed with each new “shiny object” that comes along. This is completely fine, and normal, in a momentum-driven bull market advance.

However, Warren Buffett was correct when he stated”

“Bull markets are like sex. It feels the best just before it ends.”

Bull markets feel the best just before they end, and then you’re left dealing with the long-term consequences. (It took me 4-college tuitions to figure that one out.)

Kidding aside, when we start looking at the market using monthly data the breakout to new highs is clearly shown. However, with the market now starting to push 3-standard deviations above the 3-year moving average longer-term results have been less than exciting. (The last time this happened was the surge to the January highs which led to 145-days of consolidation.)

With markets extended, extremely deviated from long-term means, and at the third most overbought level since the turn of the century, the longer-term outlook remains bearish. The same outlook is reinforced when using quarterly data going back to 1920.

Every previous period in history where over-valuation and technical deviations collided, the resulting returns over the next cycle were not healthy for investors. Given the recent correction did nothing to reduce any of these measures, the risk remains. At this juncture, most individuals tend to let their emotions get the better of them and this is where critical errors are made in portfolios. Emotionally driven buying and selling almost always leads you into doing exactly the opposite of what you should do.

Currently, the market has registered a “buy signal,” which means we need to be following our checklist to ensure we are making sound investment decisions:

These are the questions that we ask ourselves every day with respect to our portfolio allocation structures.

You should be doing the same.

This is the basic premise of portfolio management. Investing without understanding the risk and implications is like driving with your eyes closed. You may be fine for a while, but you are going to get seriously hurt somewhere along the way.

There is NO RULE which states you have to jump into the market with both feet today. This is not a competition, or game, that you are trying to “win.” Who cares if your neighbor made 1% more than you last year. Comparison is the one thing that will lead you to take far more risk in your portfolio than you realize. While you will love the portfolio as it rises with the market; you will hate it when the market declines.

Being a “contrarian” investor, and going against the grain of the mainstream media, feels like an abomination of nature. However, being a successful investor requires a strict diet of discipline and patience combined with proper planning and execution. Emotions have no place within your investment program and need to be checked at the door.

Unfortunately, being emotionless about your money is a very difficult thing for most investors to accomplish. As humans, we tend to extrapolate the success or failure within our portfolios as a measure of success and failure as individuals. This is patently wrong. As investors, we will lose more often than we would like – the difference is limiting the losses so we can maximize the long-term returns.

This explains why there are so few really successful investors in the world.

As stated this past weekend:

“Again, with portfolios primarily invested, there is little for us to do. We did let some weak performers go last week and will look for a pullback to add to winners and make some new bets.

As always, when it comes to your portfolio:

‘Do more of what works, and less of what doesn’t.’ – Dennis Gartman”

Portfolio Update: On August 22nd, we sold three positions (STZ, CVX, EMN) which had previously breached “stop losses.”  As always, by the time a “stop loss” is triggered the position tends to be oversold. Therefore, we try and wait for a reflexive rally to sell into. We have 4-5 new positions we are looking to add on any short-term corrective action in the market.