As I addressed on Tuesday, the exuberance in the markets following the election, is getting just a bit overdone. To wit:

“Such an outlook is certainly encouraging, but there is a long way to go between President-elect taking office, drafting bills and getting them passed. There is even a further period of time before any actions actually passed by the Trump administration actually create perceivable effects within the broader economy. In the meantime, there are many concerns, from a technical perspective, that must be recognized within the current market environment.”

The level of “complacency” in the market has simply gotten to an extreme that rarely lasts long. The chart below is the comparison of the S&P 500 to the Volatility Index. As you will note, when the momentum of the VIX has reached current levels, the market has generally stalled out, as we are witnessing now, followed by a more corrective action as volatility increases.” This rise in complacency is also correspondent to the level of investor optimism following the recent election. The change in expectations is actually quite a phenomenon considering the rapid change in the narrative from “Trump The Terrible” to “Trump The Great.”

This post-election surge in investor optimism is shown below. The first chart is the bull/bear ratio of both professional investors (as represented by the INVI Index) and individuals (from AAII). Currently, the level of bullishness has surged to levels more normally associated with intermediate term tops in the market. The net bullishness (bulls minus bears) of both individual and professional investors has likewise surged to levels which again have been more historically representative to intermediate term tops in the market. As I have noted on Tuesday, with the markets overly extended, bullish and complacent, the risk of a correction has risen markedly. 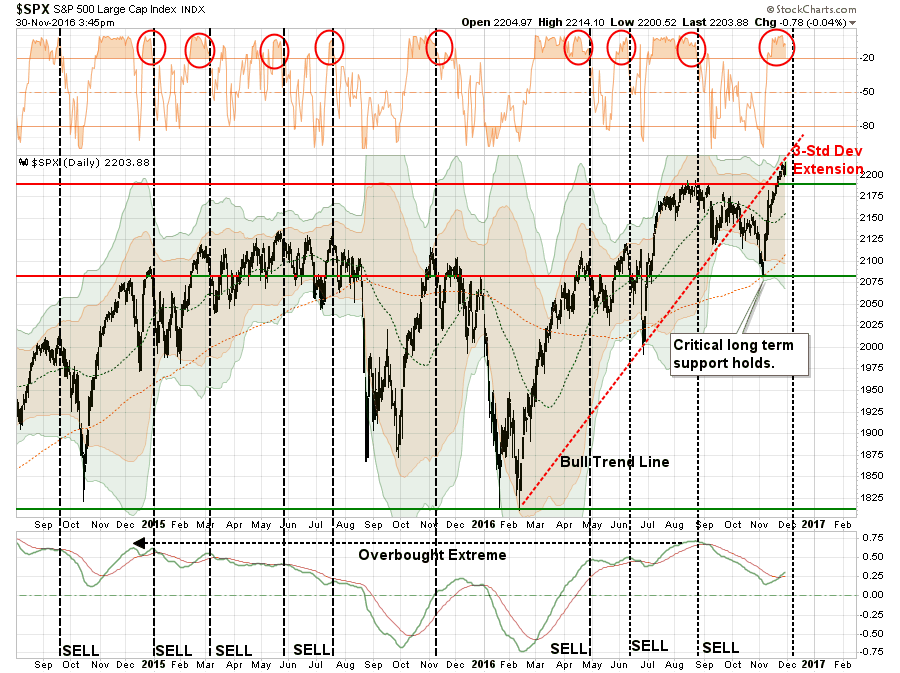 As shown in the chart above, the market is currently pushing a 3-standard deviation of the 50-dma which it has not done at any point over the last 3-years. Such extensions can, of course, be resolved by the markets either trending sideways or declining. In either event, the current levels of complacency, bullish optimism and price extension suggest there is little upside in the markets currently.

As I discussed previously, the most likely outcome is some corrective action in the first couple of weeks of December as hedge and mutual funds pay out redemptions and distributions. Such a correction will offer a better opportunity to re-evaluate equity related exposure and adjust accordingly.

Importantly, there is little currently to suggest the markets can withstand higher rates, inflation, US Dollar or tighter monetary policy for long. The impact to exports, corporate earnings, consumption and debt will impact economic growth negatively which is why I am still hedging equity risk exposure in portfolios. Maybe “Trumponomics” will work as planned and economic cycles can be repealed? Maybe stocks have indeed reached a “permanently high plateau?”

However, given the current dynamics of the market from a historical perspective, valuations, debt-to-income ratios, etc., there is little to suggest such long-term bullish outcomes are likely. For now, I suggest remaining patient as the long-term benefits of excessive risk taking are skewed to the downside.

But then again, as John Maynard Keynes once quipped:

On Monday, I listened to an interesting discussion on why investors should jump into “small cap” stocks now as the “Trump Train” was leaving the station. The premise is lower tax rates, and stimulus spending via “infrastructure,” is going to provide an ongoing boost to smaller capitalization stocks.

Of course, small capitalization companies have already experienced a tremendous move since the election chasing this exact premise. However, there may be a problem.

Small capitalization companies, as opposed to the larger brethren, are impacted more quickly by changes in the economic and monetary environment. For companies that do business internationally, changes to the dollar create a bigger impact earnings. Changes in interest rates more quickly impact decisions on borrowing decisions by changing the costs of capital.

The first chart shows the small-cap index relative to the 6-month rate of change of interest rates. The dashed black lines show that when there has been a rapid rise in rates, there has been short to intermediate negative outcomes for small-capitalization stocks. The same can be seen with the 6-month rate of change in the US Dollar. As the dollar rises, the cost of exports to foreign buyers rise as well. Currently, small-caps are getting the double whammy of rising rates and stocks simultaneously as shown below. If the media is correct, and the dollar and rates continue to strengthen under “Trumponomics,” the combined impact could effectively derail much of the benefit of the expected policies. There are also threats that stem from enacting large tax cuts and boosting public spending in an economy already nearing full employment, higher interest rates, and a stronger dollar. As noted by Anatole Kaletsky via Project Syndicate:

“The impact on financial markets will be disruptive, regardless of whether the Fed aggressively tightens monetary policy to pre-empt rising prices or lets the economy ‘run hot’ for a year or two, allowing inflation to accelerate.

With the US economy growing faster than expected and long-term interest rates rising, excessive strengthening of the dollar is a third major risk. Even though the dollar is already overvalued, it could move into a self-reinforcing upward spiral, as it did in the early 1980s and late 1990s, owing to dollar debts accumulated in emerging markets by governments and companies tempted by near-zero interest rates.“

Just remember, as has always been the case, rapid changes in monetary variables have inevitability led to an unexpected and exogenous shock that have surprised the markets. This time will likely be no different.

Just recently, Barron’s penned an interview with Jeff Gundlach discussing the recent election of President-elect Trump and his views on interest rates going forward. To wit:

“Trump’s pro-business agenda is inherently ‘unfriendly’ to bonds, as it could to lead to stronger economic growth and renewed inflation. Gundlach expects President-elect Trump to ‘amp up the deficit’ to pay for infrastructure projects and other programs. That could produce an inflation rate of 3% and nominal growth of 4% to 6% in gross domestic product. ‘If nominal GDP pushes toward 4%, 5%, or even 6%, there is no way you are going to get bond yields to stay below 2%,’ he says.”

First, you can’t blame Gundlach for “talking his book” because if he is right, he will lose a LOT of money over the next 5-years as assets flow out of his bond funds and into other asset classes. However, I really don’t think he has much to worry about.

While everyone is certainly exuberant about the hopes for an economic boom under President Trump, let’s step back from the ledge for a moment and look at some realities.

As I have shown previously, there is a very high correlation between economic growth, inflation, interest rates and wages. The problem for Trump, and for Gundlach’s outlook, is that we no longer reside in the 80’s where a large group of “baby boomers” were entering the workforce and driving a massive wave of innovation and productivity changes.  Today, we are on the wrong side of the demographic trends combined with falling productivity and labor force growth.

“In any event, the horses may already be out of the barn. Only 8.5% of payroll employment is now attributable to manufacturing, down from 10.3% 10 years ago, 14.3% 20 years ago, and 17.5% 30 years ago. Bringing factory jobs back to the US may bring them back to automated factories loaded with robots. Even Chinese factories are using more robots.”

And from Harvard Business Review:

“Slow productivity growth is the main cause of slow economic growth, and slow economic growth makes it all but impossible for everyone’s boat to rise. No wonder angry citizens want dramatic change. But while voters may see the problem in a political establishment that is out of touch, the populist politicians who are challenging that establishment are unlikely to fare better.

In the short term, they may be able to medicate the economy with a big tax cut or a dose of deficit spending. When the effects of that treatment wear off, though, the effects of slow productivity growth will linger.”

But beyond the productivity problem is simply debt.

Debt deters consumer spending as the debt must be serviced. Give consumers more money via a tax-cut, as we have seen previously, and it will not necessarily show up in the economy but rather in debt service. The pay down of debt would be good provided interest rates do not rise. However, if Gundlach is right, debt service will explode consuming whatever increases to income may come from tax reductions and infrastructure spending. The same goes for the deficit. At $20 Trillion in debt, which will increase by $5 Trillion over the next 4 years at current run rates, an increase in rates towards 6% will send service costs skyrocketing. The deficit will expand sharply towards $2 Trillion completely sapping the economic recovery story. As opposed to the 1980’s when deficit spending could be used to increase economic growth, with a current $650 billion deficit, the input of an infrastructure spending program will be negligible at best and massively deflationary at worst.

If the Fed increases interest rates, along with the impacts of higher treasury rates, such will choke off the flow of credit available and makes businesses less likely to spend. While it may reign in inflation, it also decreases economic output. This typically leads to a recession.

As stated, the net positive impact to economic growth in the short-run from a Trump plan would be negligible.

“In short, introducing large stimulus plans during cycle peaks — roughly where we are now — doesn’t increase private spending as much as during downturns. So the 4% GDP growth promised by Trump is ‘not going to happen’ even with the plan.”