One of the most important readings I have done as of late was from Horizon Kinetics on investing and modeling. It’s a bit long, but worth a read particularly if you are of the “buy and hold” type mentality.

While the whole piece is worth reading, here was the important point as it relates to the market environment we are in currently.

“Attention to these two issues, liquidity and securities with idiosyncratic characteristics will become increasingly important. Particularly for people who believe they are appropriately diversified and in defensive equity sectors in the manner now generally practiced.

The channeling of the $2+ trillion flood of assets into index funds since the 2007 Financial Crisis forced ETF organizers to focus on the largest companies with the most share trading liquidity. The sheer weight of that much money into the rather limited number of companies large enough to absorb that much demand for their shares has distorted prices to an extreme degree.

It’s simply a matter of supply and demand – no one who has ever visited a Middle-East souk or a farmer’s market or art auction is confused by what moves the prices. Yet in the stock market, the influence of the same forces is still generally unnoticed.” “So we’ll just focus on how the modernized practice of indexation has distorted “defensive” equity investing. This should be prefaced by an understanding that indexation as originally conceived by the academic founding fathers of indexation involved simply owning the entire market, simply being a participant in the results of all stocks: large, small, fast growing, mature. After making a long-term asset allocation decision, one would decide how much to place in stocks, how much in bonds, how much in cash as a risk balancer. Very little cause for adjustment. The idea of industry sector funds, style funds, country funds, runs counter to the very mechanism they were proposing to avoid the perennial challenge: how does one even begin to understand the risks entailed by the 1,594 different ETFs traded in the U.S. as of year-end 2015 (specifically, 360 broad-based, 266 sector funds, 592 international, 81 commodity, 21 hybrid and 274 bond ETFs). Which do you buy, when do you sell, and why?”

Horizon is correct and the problem is that money is piling into ETF’s and “passive index” investments because they are erroneously being considered safe. The reality is they aren’t. As I stated just recently:

“It is effectively the final evolution of ‘bull market psychology’ as investors capitulate to the ‘if you can’t beat’em, join’em’ mentality.

But it is just that. The final evolution of investor psychology that always leads the ‘sheep to the slaughter.’

Let me just clarify the record – ‘There is no such thing as passive investing.’

While you may be invested in an ‘index,’ when the next bear market correction begins, and the pain of loss becomes large enough, ‘passive indexing’ will turn into ‘active panic.’

Sure, you can hang on. But there will be a point where your conviction will eventually be broken. It is just a function of how much loss it takes to get there.” It is important to remember, and this is Horizon’s point, that indexing misses the point of proper investing which is comprised of specific asset selection and risk management. What “Robo-Advisors,” and their unwitting participants, will find out in fairly short order is that correlated markets are great on the way up, but not so much on the way down. The chart below is the performance of the Betterment equity model portfolio selections.

Importantly, notice what happens during market declines particularly during 2007-2008.

Furthermore, despite all of the effort to model an allocation that should provide for a “smoother ride,” you would have been much better off simply buying a total market index fund.

Sure, we can all hope this time will be different, but “hope” has never been much of an investment strategy.

On Monday, Charlie Bilello from Pension Partners tweeted out an interesting point. It is an interesting point.

As I have discussed many times previously, the biggest issue with earnings is the consistent revising of estimates downward (33% on average historically) in order for companies to “win” the “beat the estimate” game. To wit:

“But even those estimates are a likely a fantasy. Throughout history, earnings are consistently overstated by roughly 33%. This overstatement of estimates can be clearly seen in the chart below.” “If we held Wall Street analysts to their estimates at the beginning of this year, much less the beginning of the previous quarter, 100% of companies would have missed earnings during the second quarter of this year. In fact, in just the past three months, analysts have now ratcheted down their estimates for the third quarter to their lowest levels yet.” As you will note, while earnings have indeed beaten estimates in the current quarter, it would have been a substantially different picture if we held analysts to their previous estimates.

Here is the point. If you based your investment analysis on a particular company’s estimated earnings even one quarter ago, your analysis was grossly flawed despite the company eventually beating much-lowered estimates. Furthermore, despite there being a rise in earnings growth rates, there is little real growth actually being seen where it matters – in top line sales.

With earnings “growth” more of a function of bottom line manipulation through share buybacks, accounting gimmicks and cost-cutting, there is little growth in actual sales. Ultimately, it is revenue that matters and with the S&P 500 trading at record prices-to-sales levels, it is only a function of time until top-line reality collides with bottom-line fantasy. Jesse Felder penned an excellent piece on Tuesday on the ill-conceived notion pensions and endowments can reduce risk through investing in equities. To wit:

“Here in Oregon, we have a measure on the ballot which would allow public universities to invest in equities. What I find interesting, besides the fact that Oregon is one of the few states that precludes them from doing so, is how the state pitches the ballot measure:

In other words, expanding investment options from risk-free securities to risk assets like stocks will ‘reduce financial risk’ for public universities in going forward. While I agree that diversification has historically helped to ‘reduce financial risk,’ what matters most in terms of risk is the price you pay.

The truth is buying equities today is one of the riskiest propositions in the history of these markets. Valuations are extremely high. As Dr. John Hussman points out, the only time the stock market has been more highly valued than it is today was for a few months at the very peak of the dot.com mania.” “Because prices are extremely high today, returns going forward will be extremely poor. As Warren Buffett has said time and again, ‘the price you pay determines your rate of return.’ According to GMO points out, high valuations today mean the average annual real return from owning stocks over the next 7 years is a negative 3.1%:” Of course, this is the same problem that currently plagues pension funds, endowments, and other plans due to inherent flaws of misunderstanding the difference between “average” and “actual” returns. The use of “average” returns has led to a massive underfunded status which keeps pensioners and beneficiaries of these plans at risk of not seeing their full benefits in the future.

Here is the problem. You don’t get “average” returns, and any one year of underperformance, or worse, negative returns, puts you substantially behind the curve in obtaining your goals. For pension funds and endowments, this consistent underperformance has led to irreparable underfunded statuses which are pushing many plans towards insolvency.

The ‘power of compounding’ ONLY WORKS when you do not lose money. As shown, after three straight years of 10% returns, a drawdown of just 10% cuts the average annual compound growth rate by 50%. Furthermore, it then requires a 30% return to regain the average rate of return required. In reality, chasing returns is much less important to your long-term investment success than most believe.

Here is another way to view the difference between what was “promised,” versus what “actually” happened. The chart below takes the average rate of return, and price volatility, of the markets from the 1960’s to present and extrapolates those returns into the future.” 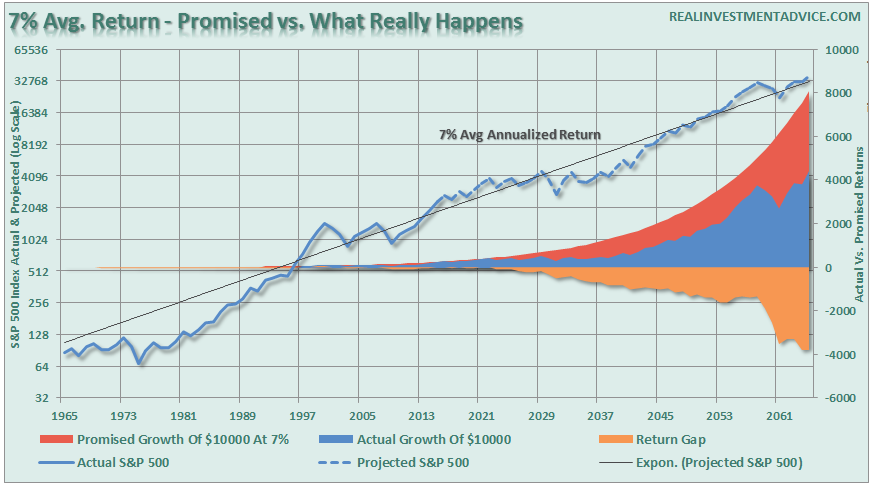 “When imputing volatility into returns, the differential between what investors were promised (and this is a huge flaw in financial planning) and what actually happened to their money is substantial over the long-term.

The second point, and probably most important, is that YOU DIED long before you realized the long-term average rate of return.”

This problem also applies to investors being lured in by the myriad of “buy and hold” advice. The use of “average” rates of return are a fantasy that leads to very poor financial outcomes for most.

Just remember, that while long-term charts certainly do make the case for investing for the “long-term,” you simply won’t live long enough to garner those results.